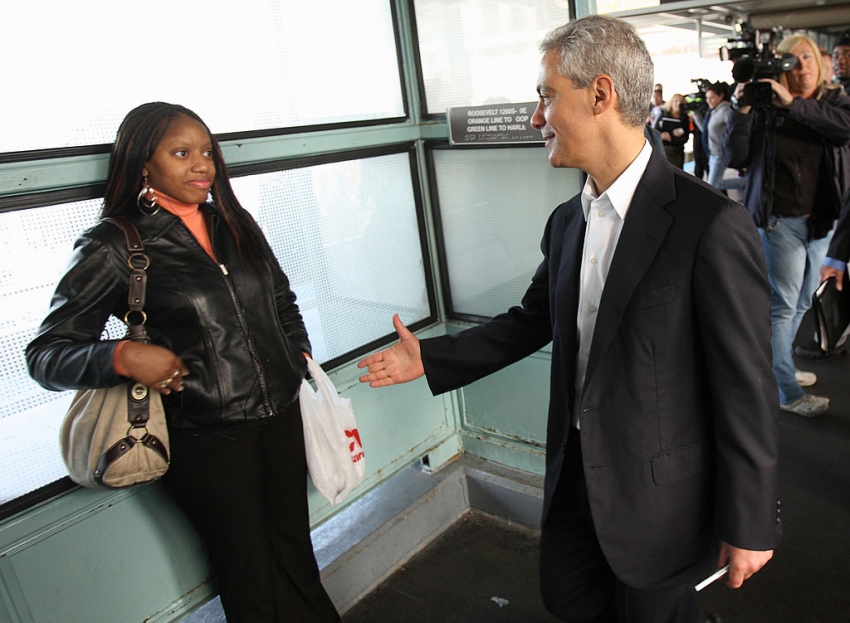 If Democrats want any hope of a comeback, they should stay as far away as possible from putting a neoliberal centrist like Emanuel in charge. (Photo by John Gress/Getty Images)

No, Rahm Emanuel Should Definitely Not Become Head of the DNC

Neoliberal centrism is exactly the wrong direction for the Democrats.

This would be tantamount to missing a slow and steady softball pitch, then handing the bat to your loudmouth younger brother to take a swing, while he’s busy trying to rent the field to some Swiss-owned hedge fund.

In the wake of Donald Trump’s election, there has been no shortage of godawful ideas for how the Democratic Party should respond to Hillary Clinton’s humiliating loss.

After winning another election to her leadership position in the House of Representatives, Nancy Pelosi said Democrats actually don’t want a new direction.

Democratic operative David Brock, for his part, is gathering the super-rich donor class together, figuring it has the best ideas for what the party should do next.

And Joe Lieberman says Democrats need to go back to tacking right, since that worked so well when he ran alongside Al Gore in 2000.

But perhaps the most asinine idea came this week from Chicago magazine’s Carol Felsenthal, who proposed that Chicago Mayor Rahm Emanuel run for the head of the Democratic National Committee (DNC).

Yes, the same Rahm Emanuel who was an architect of NAFTA, a key player in passing both Bill Clinton’s crime bill and welfare reform, and a corporate Democrat through and through, whose neoliberal, centrist politics are without rival.

This would be tantamount to missing a slow and steady softball pitch, then handing the bat to your loudmouth younger brother to take a swing, while he’s busy trying to rent the field to some Swiss-owned hedge fund.

Felsenthal offers a number of reasons why her proposal would be a brilliant idea: Emanuel has a history of success at electing Dems! He has a belly full of fire that can broadcast Democratic values far and wide! He’s just the kind of no-nonsense leader we need to stand up to Trump! He’s a Jew! (Yes, that’s really one of her arguments.)

But before we even consider what it would mean to put Emanuel—a Clintonite Democrat if there ever was one—in charge of rebuilding the party, we should turn to what his leadership has looked like in Chicago.

Emanuel has earned his reputation as “Mayor 1%” by shutting down public mental health clinics and public schools, giving massive tax breaks to corporations while black and brown neighborhoods remain mired in poverty, selling off public goods and services to private interests that prey on city taxpayers, laying off public sector workers, presiding over a scandal-plagued police department, and overseeing a historic number of shootings and gun deaths this year alone.

Is this really the track record we want from someone to help lead the opposition to a Trump presidency? If that’s the best Democrats have to offer, get ready for a whole lot more disaffected voters.

On it’s face, putting Barack Obama’s former chief of staff and the one-time head of the Democratic Congressional Campaign Committee (DCCC) in charge of charting a new course for the Democratic Party might seem not entirely unreasonable.

Hell, he was able to help Democrats retake the House in 2006 by recruiting moderate “Blue Dogs” to take on vulnerable Republicans. Maybe, as Felsenthal advocates, that’s just what the party needs?

First off, we should note that not many of those Blue Dogs are still around today. They were only able to win enough seats to form a majority in a wave election year, and were quickly supplanted by Tea Partiers in 2010, and facing near extinction by 2014.

And even when they were in office, many held such retrograde positions on issues ranging from health care to Wall Street regulation that they were often hard to discern from Republicans.

The job of someone in charge of electing Democrats should be to grow the influence and power of the party over the long term. In this regard, with Democrats now in their weakest position nationwide in nearly a century, Emanuel’s tenure looks much more like a failure than success.

But even if we grant Emanuel the honor of having been a keen political tactician in the past, is he really the best mouthpiece for Democratic values today?

After this election, it should be clear that a corporate-minded, technocratic approach to governing is not an inspiring message to potential voters. Clinton was largely viewed as a product of the political and economic establishment, and in thrall to Wall Street financiers.

If Democrats want someone in the mold of Clinton, Emanuel—a former investment banker and longtime Democratic Party operative—would be a perfect choice. Except for one thing: she lost.

So where else in Emanuel’s resume can we look for bold positions on the Democratic platform?

Emanuel has scored high marks in the press of late for his tough stance on ensuring Chicago remains a sanctuary city for undocumented immigrants under Trump’s presidency. Of course we should applaud all attempts to safeguard those facing the brunt of Trump’s attacks, and keeping federal agents from raiding immigrant communities is an important step.

But let’s not forget Emanuel’s past views on immigration when on the national stage. As Obama’s chief of staff, Emanuel famously advised the president to hold off on pushing for comprehensive immigration reform in 2010, telling him it was too much of a political risk.

This move earned him the scorn of immigration advocates both in and outside of Congress—and it wasn’t the first time. Emanuel had previously called immigration “the third rail of American politics” and warned other Democrats not to take a strong stance on the issue.

Back in 1996, when working for Bill Clinton, Emanuel issued a memo to the president advising him to step up immigration hearings in a number of states, including Illinois, so he could “claim and achieve record deportations of criminal aliens.”

We can only hope that this isn’t the same advice that Emanuel gave Trump during their recent phone meeting in which he advised the president-elect on his transition into the White House.

Indeed, Trump and Emanuel are no natural enemies. Trump actually donated $50,000 to help elect Emanuel as mayor of Chicago back in 2010. Emanuel’s brother, Ari, is a close friend to Trump, has served as his agent, and met privately with the president-elect at Trump’s New Jersey golf course after the election. For Trump’s part, he has said: “I like Rahm very much.”

Not exactly the ideal pedigree for running opposition on our incoming xenophobic president who’s already inspiring neo-Nazis to openly salute him.

Which gets to Felsenthal’s most daft argument: implying that Emanuel is a good choice to run the DNC because he’s Jewish.

She brings up this point to contrast Emanuel with one of the top contenders for the DNC chair position, Minnesota Rep. Keith Ellison, a Muslim. Ellison has been attacked for his past comments on the issue of Israel—even though they were in line with the positions of the majority of American Jews.

While some have gone as far as to call Ellison an anti-Semite, those inane smears have been debunked.

Felsenthal assures us, though, that Emanuel would be able to wholly avoid these false accusations because he “can claim without hyperbole that ‘Israel’ is his middle name.”

She goes on to argue that he could also ease “the angst of wealthy donors, many of them Jewish, who feel like they wasted their money on Hillary and her dreadfully managed campaign.”

This is troubling on a number of levels. We should not have any religious litmus test for the choice to run the DNC, and even suggesting that it would be a wise political move undercuts the very idea of democratic politics.

We are in a moment in which the Democratic Party must reassess not just its strategy, but who it aims to represent and whose interests it should serve. For decades, the party has been squarely centered around the financial elite and corporate donor class.

This has helped empower corporations, enrich bankers and lobbyists, and concentrate power and wealth in fewer and fewer hands. But what it has not done is grow the Democratic Party.

As a result, nearly all of the progressive gains made in recent years face a truly dire future in the face of the incoming Republican majority.

The alternative we need is a party that is actually of and for the working class. This is not some quixotic dream; it’s the only chance we have of avoiding a future of perpetual conservative rule.

If the Democrats have any hope of becoming that party, it can only happen through new leadership—and a new direction.

Many Chicagoans would surely be happy to see Mayor Emanuel sent off to some other far away position. But if the Democrats want to remain relevant in 2018 and beyond, he should most definitely not be picked to head the DNC.