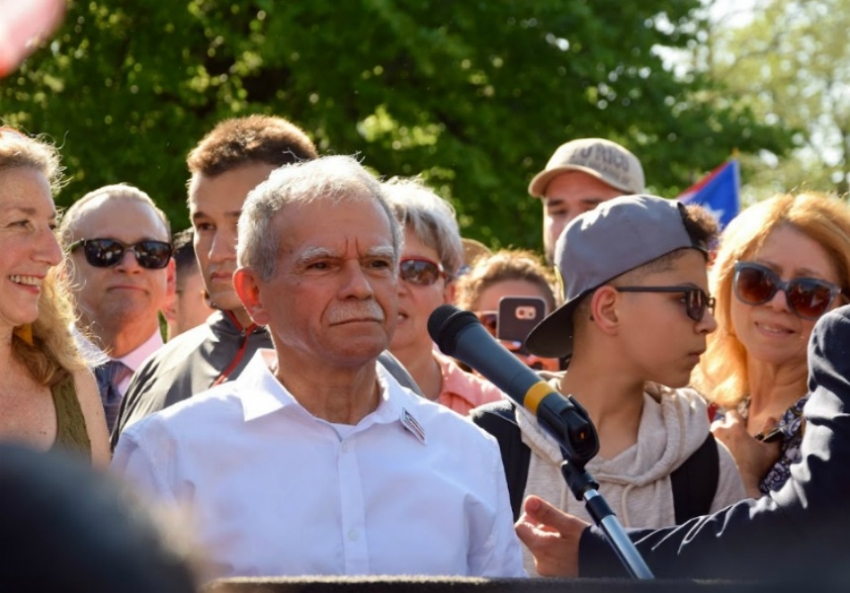 Oscar Rivera is flanked by supporters as he addresses a celebration in Chicago on May 18. (Martín Xavi Macías)

Oscar López Rivera was welcomed home by large crowds in the Chicago neighborhood where he once lived.

That decolonization struggle continues today in Puerto Rico, where social movements are fighting austerity enforced by a U.S.-imposed junta.

After 36 years as a political prisoner, freed Puerto Rican independence activist Oscar López Rivera received a hero’s welcome on May 18 in the streets of Chicago, where hundreds converged at a welcome-home ceremony in Paseo Boricua, a Puerto Rican neighborhood in the city’s West Side. The procession came one day after Rivera walked out of prison, following former President Barack Obama’s commutation of the 74-year-old’s sentence and ending his status as the longest-held U.S. political prisoner from Puerto Rican liberation movements.

“The colonized have a right to fight for independence,” Rivera declared from a platform facing the crowd of supporters, some of whom had spent decades fighting for his release. “Colonialism is a crime against humanity.” Reflecting on his incarceration, Rivera said he’d never lost the hope of seeing the faces from his old neighborhood again. His mission in life, to struggle against neocolonialism in Puerto Rico, had been renewed, he proclaimed.

Before he was incarcerated, Rivera’s organizing and vision was pivotal for Chicago’s Puerto Rican community. When Rivera moved with his family to Chicago at age 14, gentrification had pushed Puerto Ricans out of Lincoln Park and into intensely segregated areas of the city, such as Humboldt Park. Puerto Ricans faced rampant discrimination in public schools and lived in substandard housing operated by slumlords. Rivera began organizing in Chicago in the 1960s after returning from service in the Vietnam War, joining the vibrant Puerto Rican liberation movements that were sweeping the country.

Rivera was arrested in 1980 and convicted in 1981 for charges including “seditious conspiracy” related to the activities of Fuerzas Armadas de Liberación Nacional (FALN), a revolutionary group that advocated for self-determination and autonomy for Puerto Rico, one of five remaining U.S. colonies. The group claimed responsibility for bombings of U.S. government and economic targets in major U.S. cities in the 1970s and 80s.

Rivera refused to recognize any court that treated him as a criminal. He asserted his right, under international law, to engage in struggle against colonialism, thus declaring himself a prisoner of war. Rivera’s supporters have consistently maintained that his heavy charges constituted political punishment aimed at quelling large-scale Puerto Rican liberation movements.

Rivera was initially sentenced to 55 years in prison and was later handed a 15-year term for conspiracy to escape after he was targeted by a “plot conceived and carried out by government agents and informants/provocateurs,” according to the People’s Law Office, which represented Rivera. In 1999, former President Bill Clinton offered Rivera and other FALN members a clemency deal, but Rivera rejected on the offer, his lawyers say, on the grounds that it did not extend to all Puerto Rican political prisoners.

When Obama, in one of his final acts, commuted Rivera’s sentence, the former president secured the freedom of the last Puerto Rican political prisoner. Since his commutation in January, Rivera’s longtime attorney Jan Susler says he has expressed solidarity with political prisoners of other movements, particularly from the anti-imperialist, American Indian, and Black freedom movements. Leonard Peltier and Dr. Mutulu Shakur are among those still locked up.

Speaking as a free man, Rivera addressed a crowd that included students from the alternative high school he helped found, Dr. Pedro Albizu Campos High School, who lined his path with Puerto Rican flags in hand. Tony Williams, an 18-year-old senior at Albizu Campos, was part of a group of students that traveled to Washington D.C in January to deliver letters to then-President Barack Obama, petitioning for Rivera’s release. Williams told In These Times that Rivera’s release was a “big step” but “not the end of” the struggle for justice. “It goes to show we can make a difference when we unite,” he underscored.

Barbara Ransby, University of Illinois at Chicago professor and director of the Social Justice Initiative, called the event a moment of “reunion, vindication, and reclamation” in an address to the crowd. Global movements for justice had not forgotten Rivera, bringing his name and struggle into spaces of resistance, she emphasized. “Even if you were not with us, you were with us,” said Ransby.

The procession was speckled with Puerto Rican, as well as Palestinian and queer pride flags. Rasmea Odeh, a Palestinian activist and former political prisoner, told the crowd that the struggles for the liberation of Palestine and independence in Puerto Rico are connected by solidarity movements in Chicago. “He has not just been your leader,” Odeh told the crowd. “He’s been our leader too.”

Odeh started her sentence in an Israeli prison a decade before Rivera began his. She will soon be forcibly deported as a condition of a plea deal with the U.S. government, a decision she made with the backing of a movement who helped her resist legal persecution. Addressing the crowd, Odeh declared that Rivera taught movements what it “means to be principled and committed.”

Like Odeh, Rivera has been smeared in the press. Ricardo Jiménez, a veteran of the Puerto Rican independence movement and a former political prisoner, was upset with the framing in news articles questioning whether Rivera was a “terrorist or hero,” arguing that the story is being framed as if U.S. colonialism is not part of the context. “The definition of what a ‘terrorist’ is belongs to the nation,” he told the crowd. “In Latin America, we define our heroes.”

Susler was the one who called Rivera to inform him about his commutation. “He was able to survive all the punitive measures the government threw at him to try to break him,” she told In These Times. “He survived with his sense of humor, his politics and his commitment intact.”

Susler declared that Rivera’s release is “a win for people across the [Puerto Rican] diaspora, those who in the face of the injustice, said ‘no, this can’t keep going on.’” According to Susler, her work to free Rivera transcends the typical client-attorney relationship. She sees herself as a compañera de lucha, a contributor to an international “decolonizing process.”

That decolonization struggle continues today in Puerto Rico, where social movements are fighting austerity enforced by a U.S.-imposed junta. In 2016, Congress installed a fiscal control board which ostensibly is set up to find ways to pay back more than $70 billion in bond debt, much of which is “owed” to Wall Street creditors. More than 40 percent of Puerto Ricans live below the poverty line, while child poverty neared 60 percent in 2015.

Now that he is free, Rivera plans to travel across this austerity-ravaged island and, according to Susler, will visit each one of the 78 municipalities of Puerto Rico. “He’s missed his people,” she said. “He is thirsty to hear what people want and figure out where he best fits in with current movements.”

Rivera will be back in Chicago on June 17, leading the annual Puerto Rican parade as grand marshal. Susler sees no reason why the government would attempt to bring any further charges against Rivera. “He’s done with his sentence,” she declared. “He will live his life and continue to struggle for freedom and justice for Puerto Rico and for the world.”

Martín Xavi Macías is a multimedia journalist and digital media educator based in Chicago. You can follow him on Twitter at @mxm_chi.