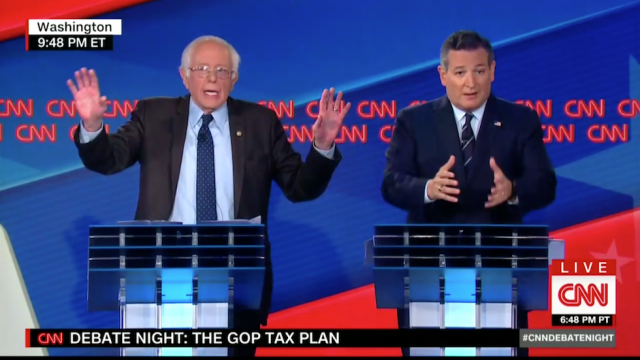 Bernie Sanders was the clear winner of the CNN debate on tax policy. (CNN)

In CNN’s Tax Debate, Bernie Sanders Showed How Democrats Can Win with Socialism

By offering a bold vision of policies to help working families, Sanders voiced a popular alternative to Ted Cruz and the GOP’s barbarism.

In contrast to what you might expect from most Democrats, Sanders was able to reframe last night’s debate away from Cruz’s fear-mongering about taxes to what services the government should be expected to provide.

Had Wednesday night’s CNN debate on tax reform instead been one for the presidency, the odds for Democrats would look pretty good. Ted Cruz, an unlikable Republican, was pitted against Bernie Sanders, the country’s most popular politician, who articulated a common-sense vision for an America based on equality and a redistribution of wealth from the top to the bottom.

But rather than embracing this bold vision, the Democratic establishment seems to be moving in the opposite direction. Following the debate, news broke that the DNC had pushed out a number of progressives from its leadership positions, including many who had supported Rep. Keith Ellison in his leadership bid against current chair Tom Perez, Obama’s Labor Secretary.

One of the few correct things Ted Cruz said at Wednesday night’s debate was that Bernie Sanders and Elizabeth Warren represent “the heart of the Democratic Party.” This recent purge at the DNC raises the question of whether the party is interested in having a heart at all. Or, for that matter, in winning.

To understand why Sanders’ brand of democratic socialism presents a promising way forward for Democrats, it’s important to understand that the GOP’s current agenda is both hollow and incoherent—on economic issues in particular.

Throughout the debate, Cruz doubled down on Republicans’ talking point that cutting the corporate tax rate would fuel economic growth—the GOP plan would slash the official rate for corporations from 35 to 20, even though today’s effective corporate tax rate sits well below either of those figures. “When you cut [corporate] taxes the result is everyone benefits because you have more opportunity, better jobs and higher wages,” Cruz claimed.

The trouble with that story is that it’s patently false.

“We have run a four-decade-long experiment in reducing effective marginal tax rates on the rich, both in the individual and corporate tax systems, and it has definitely failed to fuel economic growth,” Marshall Steinbaum, a Fellow and Research Director at the Roosevelt Institute, tells In These Times via email. “What it has done is vastly increase pre-tax income and wealth inequality by facilitating the concentration of power between and within corporations—which I would argue was its aim all along.”

On taxes and other issues, the GOP’s economic talking points tend to rest on a dogma about how the economy should work which isn’t actually supported by evidence. Sanders put the debate in starker and more common-sense terms:

“Senator Cruz wants to see legislation pass that would give $1.9 trillion in tax breaks to the top 1 percent, significantly increase the national debt being passes on to our kids and our grandchildren, and in order to pay for these tax breaks for billionaires, he wants to throw 15 million people off of Medicaid, cut Medicare by over $450 billion… I do not believe that America is about giving tax breaks to the very, very wealthy and cutting life and death programs for working families.”

Cruz would likely have had a much easier time debating an establishment Democrat than a socialist. Jabs about billionaires’ campaign funding would strike close to home for DNC insiders, whereas similar attacks seem to wash off Sanders. This partially explains why Cruz decided to go after Obama’s record rather than push back on the merits of Sanders’ argument: That every American deserves healthcare, free education and a host of other benefits that are considered standard in many other industrialized nations.

For more than 50 years in American politics, accusations of being a socialist have struck fear into the hearts of Democrats. Sanders welcomes the term. “I am a democratic socialist and I ran as an Independent,” Sanders responded when prodded by Cruz. “You didn’t run as a right-winger, you ran as a Republican.”

What taxes are for

Republicans have long tried to craft a reputation for themselves as deficit hawks, even though governmental projections of their current tax plan—as Sanders mentioned—estimate that it would add trillions of dollars to the federal deficit.

In that sense, the GOP plan would seem to fail on its own terms. But that would require the party to genuinely care about the deficit in a way that it never has. On its own, the national debt doesn’t make much of a difference in terms of people’s day-to-day lives. What matters is how that money is spent, and Republicans have historically been better at understanding that than Democrats.

“There’s absolutely no economic justification whatsoever for caring about government deficits in the current economic environment.” Steinbaum explains. “In this, the Republicans have outmaneuvered Democrats time and time again. It’s one of the classic and consequential long-term political failures of the center-left over the last 30 years.”

At a time when inflation has been sluggish, expansionary programs make both economic and political sense. Such policies would help jump start the economy while garnering political support in a populist moment. In contrast to what you might expect from most Democrats, Sanders was able to reframe last night’s debate away from Cruz’s fear-mongering about taxes to what services the government should be expected to provide.

In a sly casting move, CNN recruited a Danish citizen and think tank employee to ask Sanders a gotcha question about the notoriously high taxation rates in Scandinavian social democracies. Ultimately, however, the questioner was forced to admit that Cruz’s demonization of European healthcare systems for being expensive and riddled with long waiting lines was “just not true,” and that his home country is in many ways better at meeting basic needs than his adopted one.

You don’t need to be a socialist to agree that the government should be spending more on the programs that make a positive difference in working peoples’ lives. Especially in the United States, the definition of what constitutes a democratic socialist is somewhat fluid, and many have argued that Sanders is closer to a New Deal Democrat than even a European social democrat.

What Sanders and a rising tide of socialist-aligned organizers and elected officials represent, though, is a break from the fiscal conservatism that has defined the last 20 years of Democratic Party politics, and a defense of good, big government. Whether raising the tax rate to 90 percent for the highest income earners counts as socialism is a debate worth having, but the embrace of such a goal by Democrats would represent a radical shift in how the party has related to tax policy: Seeing taxes as not just as a way to pay for vital programs, but as a means of redistributing wealth and power away from the one percent.

Lessons from the UK

Britain’s political landscape might actually offer a more hopeful way forward than Denmark’s. Conservatives are rapidly shedding members and support under disastrous leadership, and lack either youth support or rising stars. Labour, the opposition party, is unified around an uncompromising socialist vision, and may well be poised to take back the government in the next general election.

If Democrats knew what was good for them, the party could start down a similar path: embrace the fact that Sanders and Warren are the heart the party and lean hard into a redistributive agenda, going after Trump while proposing a visionary path forward. There are better conduits of that message than Sanders, but grooming them for office and national leadership would require the party to refashion itself into a welcoming place for left populism and—on a basic infrastructural level—investing in state parties rather than consultants.

The DNC, by contrast, seems content to keep losing.