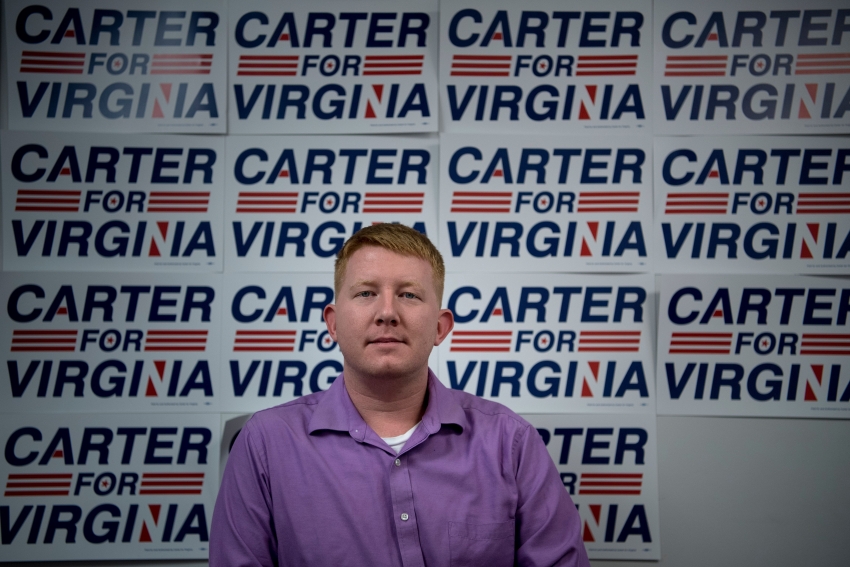 Lee Carter, a socialist who won a seat during this year's elections in the Virginia House of Delegates for the 50th District, poses on November 9, 2017 in Manassas, Va. (BRENDAN SMIALOWSKI/AFP/Getty Images)

The Democratic Socialists Scored Some Big Wins. Here’s What They’re Planning Next.

A conversation with Christian Bowe, national political committee member of the Democratic Socialists of America.

Our national electoral work is just getting off the ground, and our infrastructure is rapidly improving.

There was a lot of good news for progressives in Tuesday night's election. Gov. Chris Christie will be replaced by Phil Murphy in New Jersey, giving the Democratic Party full control of the state. Democrat Ralph Northam beat his GOP opponent Ed Gillespie in Virginia. With the election of Larry Krasner, Philadelphia will now have an unapologetically progressive district attorney who has represented Black Lives Matter and Occupy organizers in court.

Also among last night’s winners were the Democratic Socialists of America (DSA), which saw 15 members elected to office across 13 states—and not just in deep blue cities and districts.

Ross Grooters will join the City Council in Pleasant Hill, Ia., along with Denise Joy in Billings, Mont. and Seema Singh Perez in Knoxville, Tenn. Two avowed democratic socialists—JT Scott and Ben Ewen-Campen—will join the Board of Alderman in Somerville, Mass., and DSA member Lee Carter will join Virginia's House of Delegates. Tuesday’s election will bring the grand total of DSA members in elected office to 35. At the convention in August, DSA decided to prioritize electoral work. Three months later, that decision appears to have paid off.

To hear more about the DSA’s success, In These Times spoke with Christian Bowe, a member of DSA’s National Political Committee who helped coordinate the group’s electoral efforts.

Kate Aronoff: What did organizing for these victories look like on the ground?

Christian Bowe: Chapters with major candidates like city council candidate Jon Grant in Seattle, Wa. and Lee Carter in Va. were pledging to knock on 10,000 doors, and they ended up reaching well over 20,000. In some cases, like Jabari Brisport running for City Council in Brooklyn, N.Y., we worked to get him his own ballot line. (Note: Brisport ran on both the Green Party and Socialist ballot lines and won nearly 30 percent of the vote.) In other cases, we set up a national phone bank to help our five nationally endorsed candidates: Jon Grant in Seattle, Wash., Ginger Jentzen in Minneapolis, Minn., JT Scott in Somerville, Mass., Jabari Brisport in New York, N.Y. and Tristan Rader in Cuyahoga County, Oh.

Kate: Have you seen DSA members get more excited about doing electoral organizing? What do you think is driving that?

Christian: We've been trying to figure out our relationship to DSA's past strategy of Democratic Party realignment and operating through an inside-outside strategy to something closer to a clear electoral strategy. Specifically, how do our candidates build socialism and provide wins for the working class? Many of our candidates are young, so they can run again multiple times. It will take the socialist Left some time. We were definitely inspired by Jeremy Corbyn and the Labour Left's gains in the United Kingdom. We know we can't forfeit electoral work to our enemies. We can do this work even better.

Christian: We'll definitely be running more campaigns in 2018, and even better ones with more capacity. Our national electoral work is just getting off the ground, and our infrastructure is rapidly improving. The people working to help nationally are some of the best young electoral minds in the country. I'm currently in the process of writing our national electoral strategy for the next two years, and I’m on-boarding very good people to help out. We weren't expecting much this cycle, because everyone is laying the groundwork for 2018. We thought we'd pick up five wins and got 15 instead.

The President Is Goading Anti-Lockdown Militias to Violence