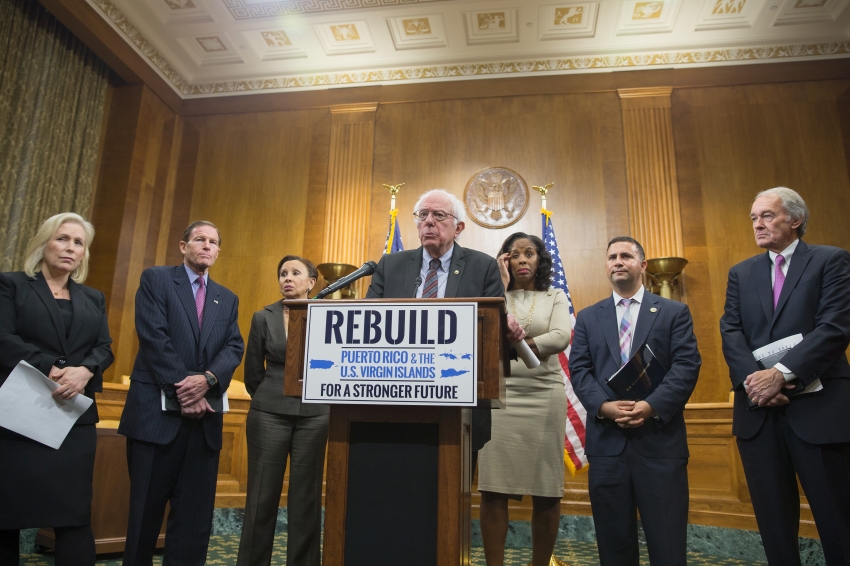 Senator Bernie Sanders (I-VT) attends a news conference to discuss 'a comprehensive plan to address the immediate humanitarian needs in Puerto Rico and the U.S. Virgin Islands, and ensure that the islands are able to rebuild in a way that empowers them to thrive on November 28, 2017 in Washington, DC. (Photo by Tasos Katopodis/Getty Images)

Building in more democratic control of the Puerto Rican economy could also be a way to head off corporate interests that tend to swoop in post-disaster.

As Republicans all but abandon the guise of deficit hawkishness with their trillion-dollar-plus tax plan, such ambitious spending proposals could be a model not just for disaster response, but for Democratic policymaking going forward. There are few paths to dealing adequately with climate change that won’t involve large-scale public investment. In that, Sanders and Warren’s “Marshall Plan” could model a way that U.S. policy can help pick up the pieces after climate-fueled storms—and help stop Hurricane Maria-style heavy weather from becoming more likely.

“Many are struggling to get clean drinking water, and more than 100,000 people have left Puerto Rico alone,” Sanders said in a press conference with several of the bill’s co-sponsors last Tuesday morning. “This is not acceptable, and we are here today to tell the people of Puerto Rico and tell the people of the Virgin Islands that they are not forgotten, they are not alone, and that we intend to do everything possible to rebuild those beautiful islands.”

More than two months on from Hurricane Maria, up to 60 percent of residents in the U.S. Virgin Islands remain without electricity and several basic services, according to a late November report from the Department of Energy. Large swathes of Puerto Rico remain without power as well.

The plans laid out in the bill are wide-ranging. It stipulates that $51 billion would be devoted to economic development on the island, and $27 billion would go toward rebuilding downed, damaged and neglected infrastructure—including the island’s long-beleaguered electric utility. An additional $62 billion would go to repaying Puerto Rico’s at least $74 billion in municipal debt. Specific provisions cover everything from grants for local agriculture to parity for Medicaid and Medicare payments to additional funds for the Department of Veterans Affairs to financing for a rapid scale-up of the island’s renewable energy capacity. The plan also hands control of restoration programs over to Puerto Ricans, stating that “the people of Puerto Rico and their elected representatives should determine the long-term future of the island.”

Building in more democratic control of the Puerto Rican economy could also be a way to head off corporate interests that tend to swoop in post-disaster. “We’ve all read Naomi Klein’s The Shock Doctrine,” said Sanders’ climate and energy advisor Katie Thomas, who worked extensively on the bill. “[Sanders] said we need to do everything we can to prevent the Shock Doctrine-ization of this situation. He wanted information on what had happened after Katrina, when so much of the public infrastructure was either privatized or eliminated. We wanted to be clear that we don’t want anything like that to happen in the future in Puerto Rico or the Virgin Islands.”

According to Thomas, the bill emerged in part from the Senator’s October trip to the island and a series of “really productive roundtable conversations with dozens of labor leaders, mayors and leaders wanting to rebuild Puerto Rico back stronger than it was before.” While the bill initially came about as a way to deal with the island’s electricity grid—virtually leveled during Maria and in dire disrepair before that—that visit and subsequent talks with people on the island pushed them to consider a broader strategy, Thomas told In These Times.

Even before Maria hit, the U.S.-appointed fiscal control board in Puerto Rico—the body now overseeing the island’s finances—had its eye on privatizing the Puerto Rico Electric Power Authority (PREPA), the island’s monopoly electric utility. “The junta,” as the control board is known colloquially on the island, is charged with restructuring Puerto Rico’s debt. The bill that created the junta, PROMESA, was intended to act as a mediator between creditors and the Puerto Rican government. While it’s kept the vulture funds that hold Puerto Rico’s debt at bay from demanding total repayment, that protection has come at the expense of deep cuts to the island’s public services and a push to sell public entities off to private bidders. PREPA was at the top of the control board’s privatization wish list before Maria. After the storm hit, the board took several more steps in that direction.

Sanders’ bill would bar the privatization of any public entity receiving funds from the U.S. government, effectively making it impossible to privatize PREPA for the foreseeable future.

Thomas also explained that one of the bill’s main priorities is not having U.S. officials decide what recovery looks like in either of the territories aided by the bill or public entities like PREPA. “It’s really important to us that the federal government is not making decisions for the people of Puerto Rico,” she said by phone. “We didn’t think it was appropriate for us to say what the future of PREPA should be, because we don’t think that’s an appropriate role for the federal government.”

Instead, the bill would entrust the Puerto Rico Energy Commission—the regulatory body that oversees PREPA, created in 2014—with overseeing plans for power restoration, with its counterpart performing the same function in the U.S. Virgin Islands.  Rather than restoring PREPA to its status pre-storm, the bill would further prioritize both getting power online as quickly as possible and transitioning rapidly over to renewable fuels, which are both less expensive and more storm resilient for the import-dependent island. While an outage at a fossil fueled central station generator can leave thousands of people without electricity, panels can often remain online and provide power amidst grid failures.

For David Ortiz, the Latino climate action network director for El Puente, expanding renewable energy goes hand-in-hand with expanding economic opportunities in Puerto Rico, where he lives. Ortiz, who consulted with Sanders’s office on the bill in the lead-up to its release, told In These Times, “Economically we’ve really been hit, almost destroyed.

“What we need to do is be able to think of multiple ways of generating renewable energy so that folks have access to it,” Ortiz continued, “be it through small community grids or through rooftop solar. But we also need to prepare our workers for that shift, and continue to have employment and support for them. What we don’t want is for other companies from outside to come into the island, because we’ll continue to have more money go outside of the island.”

He described going recently to a usually-busy part of Old San Juan with his wife and family, and finding the normally packed parking lot they use filled with just a few cars, and several stores in the area’s main business district shuttered. “You can’t help but to worry about the future of Puerto Rico’s economy,” he told me. Ortiz sees the bill as a “really holistic approach to dealing with the crisis.”

There’s nothing particularly radical about the idea of spending public funds on the kinds of things that get economies back on their feet, from job creation to massive infrastructure investment. Republicans and even Democrats tend to swat down ambitious spending proposals as wasteful. The faint silver lining of the GOP’s success with the tax bill is that they can’t claim with any authority to care much at all about the size of a federal deficit they just pledged to increase by as much as $2 trillion over the next 10 years.

Though several details of the initiative would be left up to officials in Puerto Rico, the new Marshall Plan’s structure lays out an attractive model for ambitious climate policy on the mainland—that is, democratic climate action and disaster response that talks more about what it will do for workers and the economy than for the planet. If we have the money for tax cuts for corporations and the ultra-wealthy, then we have the money to make the kinds of pro-worker economic transformations the climate crisis demands. With Sanders and Warren’s bill, Puerto Rico and the U.S. Virgin Islands could show the way forward to a Democratic Party that isn’t afraid to spend money on the things we need.