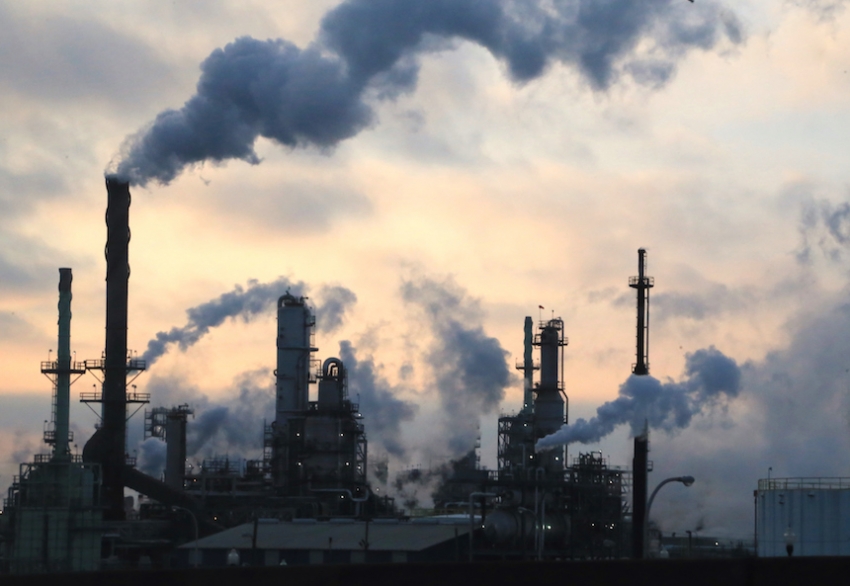 The city is modeling how to take Big Energy to task.

Court filings for the suit explicitly cite the fact that just 100 companies have been responsible for around 70 percent of all greenhouse gas emissions since the industrial revolution.

Court filings for the suit explicitly cite the fact that just 100 companies have been responsible for around 70 percent of all greenhouse gas emissions since the industrial revolution. Asking oil majors to pay, the document argues, will “shift the costs of protecting the city from climate change impacts back on to the companies that have done nearly all they could to create this existential threat.”

And there’s a lot to be paid for: A study released earlier this week found that 2017 broke the record for the cost of natural disaster, with weather and climate-related damages in the United States totaling $306 billion. Several climate change effects drove up the total, from the storm surges to the dry and hotter-than-average conditions that sustain wildfires. Cities and states on the U.S. mainland and in Puerto Rico are still struggling to rebuild after hurricanes, droughts and an unusually powerful wildfire season. New York continues to deal with the impacts of Hurricane Sandy five years on.

In such a context, New York City’s decision to take its money out of coal, oil and gas companies is a major milestone in a growing divestment movement. The fact that it will take legal action against oil giants also points to a decline in public acceptance of the industry wrecking the planet.

In theory, another tool that could institutionalize happiness at the misfortune of billionaires and make climate-minded investment at the federal, state and local levels more likely is the tax code. While Republicans tend to cast decisions around the tax code as a matter of budgetary math, in reality it’s in large part a political document, outlining the types of economic activity—and economic actors—that the government wants to promote. There are remarkably progressive changes that could be made through the tax code, such as levying high fees on destructive activities—say, fossil fuels. In the last 40 years, though, policymakers have opted for the opposite approach and greased the wheels for fossil fuel companies.

The Trump administration seems bent on cutting corporate taxes and cozying up still further to the coal, oil and gas industries. Trump named one of their own, former ExxonMobil CEO Rex Tillerson, as Secretary of State, and fossil fuel CEOs now have what might be unprecedented access to the White House. As In These Times reported late last year, Murray Energy CEO Robert Murray personally presented his policy proposals to Energy Secretary Rick Perry. This week, staffers for Sen. Sheldon Whitehouse, D. RI, obtained the Action Plan Murray has been circulating to the administration. Shared with and published by the New York Times, that document lays out the coal baron’s plans for multiple agencies—many of which are already in the works: Leaving the Paris Agreement, slashing the EPA’s staff by at least half and repealing the Clean Power Plan.

State and local governments have less power to effectively tax corporations, which can take their corporation charters to corporate-tax friendly states like Delaware.  “Progressive tax policy is hard for states to do by themselves, especially if the IRS and the feds are actively resistant, as they will be now,” Roosevelt Institute economist Marshall Steinbaum told In These Times over email. “States tried to do progressive taxation in the Progressive Era—specifically, taxing corporations—but the ‘race to the bottom’ in incorporation allowed corporations to evade that quite easily. What that means is that the idea of using progressive taxes to structure incentives in the economy—as a socio-political weapon—has been almost exclusively an element of federal policy.”

This is part of the reason why more regressive consumption taxes—like sugar or carbon taxes—have been popular at the state level, as it’s much harder to hide consumption than profits. According to Steinbaum, California may be pioneering a more aggressive state-level tax policy in its bid to levy taxes on the overseas profits of tech companies like Apple, whose headquarters are in Cupertino, Calif., but whose assets are stashed in Irish subsidiaries. “California is trying to extend [taxation] ‘beyond the water's edge,’ as the tax wonks say,” Steinbaum explains. “We’ll see how it goes.”

So long as putative taxation remains difficult at the state and local level, actions like the one New York is taking could be a means of lobbing punishing policies at big, destructive companies. The appeal of such policies extends well beyond the revenue it could generate. As with the fossil fuel divestment campaign, the goal of suits like New York City’s isn’t just to free up more funds for things like storm resilience or public transit, but to send a signal about what kinds of economic activities a society values. (Though the revenue doesn’t hurt—especially in cities and states whose budgets have been bludgeoned by austerity.)

Just before De Blasio announced the divestment and lawsuit yesterday, Exxon announced it was fighting back against a series of civil suits filed by a small handful of coastal California cities and counties, taking the oil major to task for its role in fueling and spread disinformation about sea level rise. Along with 36 other fossil fuel companies, Exxon is being sued to fund the infrastructure upgrades necessary for seaside towns to deal with the impacts of climate change. Exxon lawyers wrote in their filing on the matter that the multinational firm had fallen victim to a “collection of special interests and opportunistic politicians.”