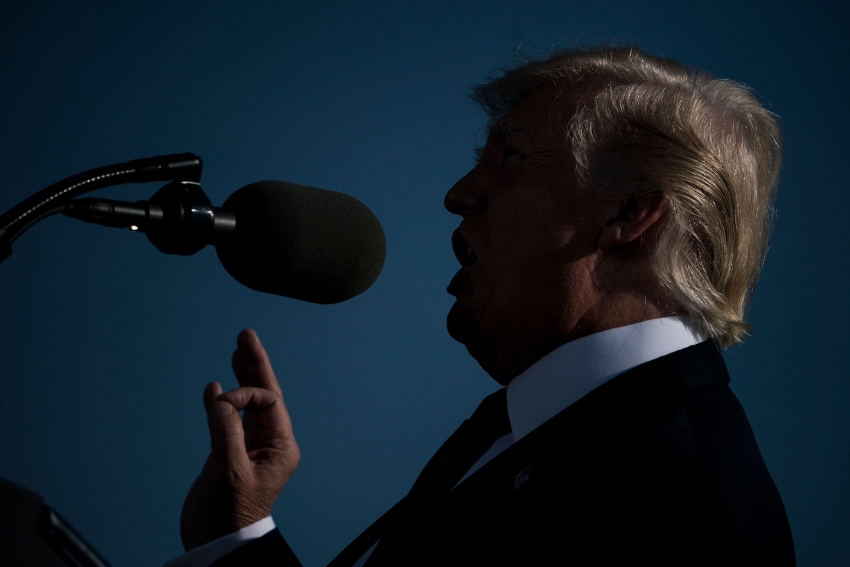 The Trump administration is seeking to further restrict and criminalize immigration in the United States. (BRENDAN SMIALOWSKI/AFP/Getty Images)

In exchange for protecting Dreamers, the Trump administration is seeking to restrict immigration and increase deportations on a vast scale.

The string of policies presented by the Trump administration would lead to an upheaval of U.S. immigration policy, closing the door to hundreds of thousands of immigrants who enter the country every year.

On Thursday, the Trump administration unveiled its latest immigration plan during a call with Republican staffers and Trump allies hosted by White House senior advisor Stephen Miller. While many media outlets described the plan as an “offer” to protect 1.8 million Dreamers, including current DACA recipients, the plan represents a hardline crackdown on immigration that would tear apart families while fortifying the deportation regime.

The string of policies presented by the Trump administration would lead to an upheaval of U.S. immigration policy, closing the door to hundreds of thousands of immigrants who enter the country every year. The American Civil Liberties Union tweeted in response that the plan “would slash legal immigration to levels not seen since the racial quotas of the 1920s.”

Even before Trump took office, U.S. immigration policies were widely criticized as inhumane, with former President Barack Obama overseeing a record number of deportations, as well as the mass incarceration of immigrant families—including children. The plan put forward on Thursday would mark a dramatic turn in further restricting and criminalizing immigration in the United States.

Along with Trump’s proposal to provide a pathway to citizenship for undocumented youth who were raised in the United States, the plan includes a $25 billion “trust fund” that would be dedicated to building a massive border defense system, including a wall along the southern border with Mexico, as well as the elimination of the immigration visa lottery, an extreme cut back on U.S. migration by extended families and a vast increase in U.S. Customs and Border Protection agents, attorneys, judges and prosecutors.

These policies would achieve the long-standing goals of hardline anti-immigration advocates by massively cutting back on the number of immigrants who come into the United States while providing new tools and expansive funding for programs designed to remove immigrants who currently reside in the country.

The planned limits on family migration would halt the entry of individuals including adult children, parents and siblings of U.S. citizens. As a result, the number of green cards issued every year—roughly one million—could be cut by up to half. This would result in a radical restructuring of U.S. immigration policy, with devastating results for those hoping to reunite with their family members in the United States.

By ending the diversity visa lottery, the Trump administration would effectively stem immigration to the United States by residents of countries in Africa—in Trump’s words, “shithole countries”—which currently account for around 44 percent of the visas offered every year through the program. The change would also curtail immigration for residents of countries in Asia and Eastern Europe, as well as island nations such as Haiti, who have previously benefitted from the lottery.

And along with earmarking $25 billion in funding for the border wall and other infrastructure—a project even the current head of the Customs and Border Protection doesn’t think is “feasible” or “the smartest way to use taxpayer money on infrastructure”—Trump is also seeking to “vastly expand the definitions of criminal offenses that could subject an individual to deportation,” according to CNN.

Additionally, the White House wants to speed up deportation proceedings to remove immigrants from the country more quickly and allow courts to detain individuals indefinitely as they wait to be deported, potentially for years.

Such changes are being proposed at a time when unauthorized border crossings are at their lowest levels in nearly half a century while the number of deportation arrests has soared.

Taken together, the Trump administration’s package of policies reads like a far-right wish list of white-nationalist policies aimed at shutting the U.S. border down to foreign immigrants and removing undocumented people from the United States on a vast scale.

And it should come as no surprise that the proposals were reportedly written in part by Stephen Miller, a hard-line anti-immigration advocate who for years has worked to make the country’s immigration system more nightmarish for the individuals who are forced to navigate it.

Miller’s pedigree includes looking to Ayn Rand and far-right author David Horowitz for political guidance, defending white lacrosse players at Duke University who had been accused of raping a black woman in 2006, working in the offices of right-wing zealots Michelle Bachman and Jeff Sessions, and embracing the same type of nativist, anti-immigration policies that have been pushed by the likes of “American carnage” auteur Steve Bannon.

The worldview shared by Bannon and Miller holds that the flow of immigrants into the United States poses an existential threat to the continued success of the American project, and that only by barricading the country to keep out nonwhite immigrant groups can the country truly prosper. This deeply racist ideology is in line with the views of white nationalist Richard Spencer, who claims to have been a “mentor” to Miller while the two attended Duke University.

Now, this ideology is driving U.S. immigration policy, and the proposals put forward by the Trump administration would go a long way toward achieving its aims.

While media headlines claim that Trump is backing a pathway to citizenship for Dreamers, the president has also said that his proposal is a take-it-or-leave-it offer, establishing that the radical anti-immigrant policies it includes would have to be enacted in order for DACA recipients to be protected. And it was Trump who rescinded DACA in the first place back in September 2017, setting up the current rush to pass legislation that would prevent the deportation of some 700,000 individuals currently covered under the program.

Trump rode into office by attacking immigrants and Mexicans, blaming them for the country’s ills and claiming that he alone could fix America’s problems—in part by shutting down our borders and carrying out mass deportations. The current proposals put forward by the administration show that Trump is staying true to his campaign’s racist and brutal promises.

Top Democrats, for their part, have so far voiced opposition to the proposals and have claimed the measures are a nonstarter for any immigration negotiations. However, Senate Democrats have also reportedly dropped the demand for DACA protections from budget negotiations with Republicans, after backing down and agreeing to a short-term funding deal to end a government shutdown, which also featured no immigrant protections.

As the Trump administration continues to push an unabashed anti-immigrant agenda, voicing opposition will be no substitute for taking action to prevent these xenophobic policies from becoming the law of the land.