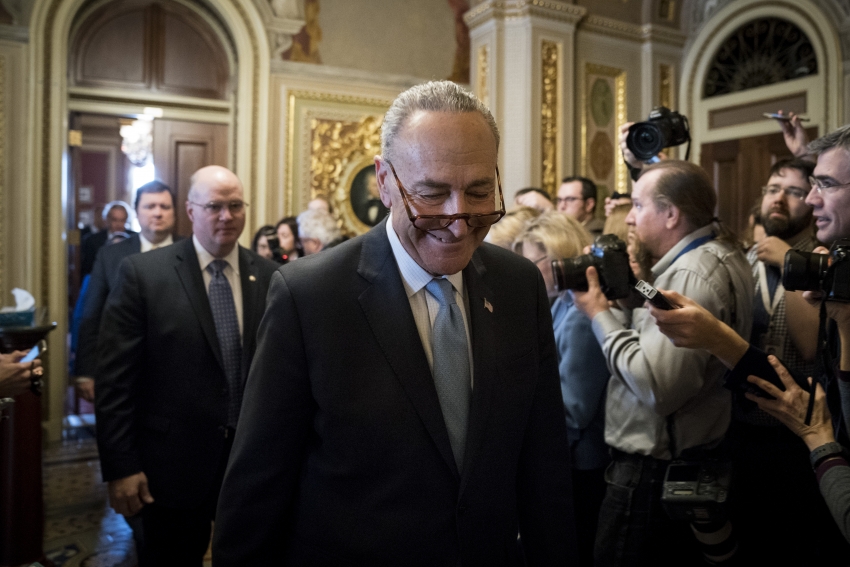 Even before Monday’s vote, many members of the party’s base said they oppose the current Democratic leadership. (Photo by Drew Angerer/Getty Images)

By negotiating a government funding deal with no protections for immigrants, top Democrats made a strong case for why the party’s activist base should be able to replace them with new leadership.

If Schumer and Pelosi really are capable of leading the Democratic Party, and representing its base, a leadership election would require them to prove it—not just to their colleagues on the Hill but to rank-and-file members of their own party.

In the year since President Trump took office, the Democratic Party’s Congressional leadership has occasionally shown some real backbone by fighting Republicans in near lock-step on issues ranging from healthcare to tax reform. Last week, when Democrats demanded protection for undocumented immigrants as part of any government funding deal, they seemed to display a level of compassion for immigrants rarely seen in previous years. It briefly appeared that party leadership—in forcing a government shutdown—was willing to take significant political risks to stand up for progressive values.

On Monday, all that changed. Democrats joined forces with their GOP counterparts to pass a short-term funding bill with no protections for immigrants, effectively throwing DACA recipients under the bus. What Democratic leaders got in return was a vague promise from Senate Majority Leader Mitch McConnell to continue talks on immigration in three weeks, plus six years of funding for children’s health insurance that Republicans’ used as a bargaining chip in negotiations.

The GOP rightfully touted this capitulation as a win for their party. And by pushing the compromise deal, Democratic leaders, including Senate Minority Leader Chuck Schumer, made a strong case for why the party's activist base should be allowed to replace them.

As Stephanie Taylor, co-founder of the Progressive Change Campaign Committee, explained in a statement Monday, the “cave by Senate Democrats—by weak-kneed, right-of-center Democrats—is why people don’t believe the Democratic Party stands for anything.”

Within the confines of the American political system, however, replacing party leadership is nearly impossible.

The primary mechanism grassroots advocates currently have for influencing party leadership and holding officials accountable is through engaging in Democratic primaries at the local, state and federal levels. By backing progressive challengers, party activists can pressure the current leadership and potentially unseat these leaders if they’re not representing the interests and positions of the base. Additionally, activists can pester these officials through protest and direct action. These strategies can signal to Democratic leaders that they face opposition among segments of their base, and—with enough organizing—legitimately threaten their replacement.

Ultimately, however, the barriers to actually ousting national Democratic Party leadership remain high. Voter turnout in party primaries is notoriously low, and incumbents enjoy a strong advantage in these races. Even if a sitting leader is unseated in a primary, their replacement is chosen by other sitting senators and representatives. As a result, the path to any leadership shake-up is a tedious one.

So while the base may be energized and gravitating leftward, Democratic Party leadership has continued to offer progressives and the Left some version of a line borrowed from Margaret Thatcher: There Is No Alternative. As the Democrats’ inspirational slogan released last summer put it, “Have you seen the other guys?”

In lieu of root and branch changes to the structure of American democracy, here’s a modest proposal: Why not make it possible to vote Democratic representatives out of leadership?

Formal leadership elections could force the Democratic Party’s top brass to reflect the will of the people who actually vote for them, and help turn the party into a vehicle for bold progressive policies.

Take the example of the United Kingdom, where leadership elections are a regular feature of party politics. Through these elections, members are able to select both the face and direction of their party by campaigning for their chosen candidate. Participation in these races among party members is high: The Labour Party currently has around 552,000 members throughout the UK, and around 506,000 members and supporters voted in the last leadership election.

In the UK, when leadership fails to deliver on their campaign promises—or loses in general elections— opposition within the party can call leadership's mandate into question. Once party MPs issue a vote of no confidence in leadership, they can trigger new elections, wherein candidates get on the ballot by securing the support of their fellow MPs. It’s also customary for defamed party leaders to resign after a major electoral defeat, as former Labour Party leader Ed Miliband did when he lost the 2015 general election to Conservative former Prime Minister David Cameron. Cameron himself resigned as prime minister and Conservative Party leader after the Brexit vote in 2016, having lost his mandate to rule.

The campaign to elect Jeremy Corbyn as Labour leader in 2015 won in large part by bringing tens of thousands of new members into the party and recruiting thousands of volunteers to make the case, door by door and phone call by phone call, for why he should be the new party leader. Corbyn was elected with a mandate to carry out his stated platform, and was empowered to set the direction of Labour nationally.

In the summer of 2016, shortly after the Brexit vote, Corbyn defended his leadership from the party’s more conservative wing, winning with an even stronger mandate than he had prior to the challenge. Under Corbyn’s leadership, Labour has shifted markedly to the left, and the party performed surprisingly well in the 2017 general election by running on an openly socialist manifesto.

The United States, of course, does not operate under a parliamentary system. And the Democratic Party generally functions as a loose coalition of various constituencies—Wall Street bankers, college-educated whites, communities of color, immigrants, union members and many others.

Depending on their constituencies, individual Democrats appeal more or less to each one. Republicans in that sense have a somewhat easier job deciding what policies to push for, given that their base is overwhelmingly white and middle class, along with a segment of working-class voters and a handful of wealthy, influential donors.

Democrats needn’t be demographically homogenous to have a more principled and unified message, though.

Instituting open leadership elections in the Democratic Party could create a structure for candidates to battle it out between the party’s various factions, making it explicit what those factions are and defining their bounds. Winning a leadership bid would mean out-organizing opponents in ways not dissimilar to party primaries, with candidates presenting their visions for how the party should operate and what policies it should fight for.

If Schumer and House Minority Leader Nancy Pelosi really are capable of leading the Democratic Party, and representing its base, a leadership election would require them to prove it—not just to their colleagues on the Hill but to rank-and-file members of their own party.

The onus would still be on progressive challengers to win leadership fights against incumbents. But the end result would be a party that’s considerably more clear about both what its priorities are and what it means to be a Democrat.

Whether you think Schumer was playing a cunning game of 12-dimensional chess or selling out undocumented immigrants, there are other reasons to question his leadership. In a political landscape defined by populist anger at elites and business as usual—where Bernie Sanders remains the country’s most popular politician—Schumer may be as close to Wall Street as any Republican. In 2009, 15 percent of the $11 million that big banks poured into 2010 Senate races went solely to his campaign.

But there's currently no direct way for Democratic voters nationally to hold leaders like Schumer more accountable to the party's base than to his backers on Wall Street.

Implementing leadership elections could give the base more influence over the direction of the Democratic Party, but such a change couldn’t take place in a vacuum. Particularly after Monday’s vote on the government funding deal, many younger and more progressive voters feel an understandable lack of investment in a party they see as unwilling to take bold stands. Motivating these voters to care enough to take part in a leadership election would require a major cultural shift in and of itself. And insurgent progressives would likely still face a steep uphill battle just as they do in party primaries.

In a functional and representative democracy, though, Democratic Party leaders would have stepped aside after the devastating 2016 election and new leaders would have been chosen, along with a new direction and strategy. There’s good reason to believe that young people, women and people of color are the future of the Democratic Party. Rather than endlessly re-litigating the 2016 primary, leadership elections could settle the question of where the energy of the Democratic Party actually lies rather than reading the tea leaves of consultants, poll numbers and sporadic special elections.

The Democratic Party leadership’s capitulation on protecting DACA recipients was proof to many progressives that such a turnover remains long overdue. Why not let them prove it?