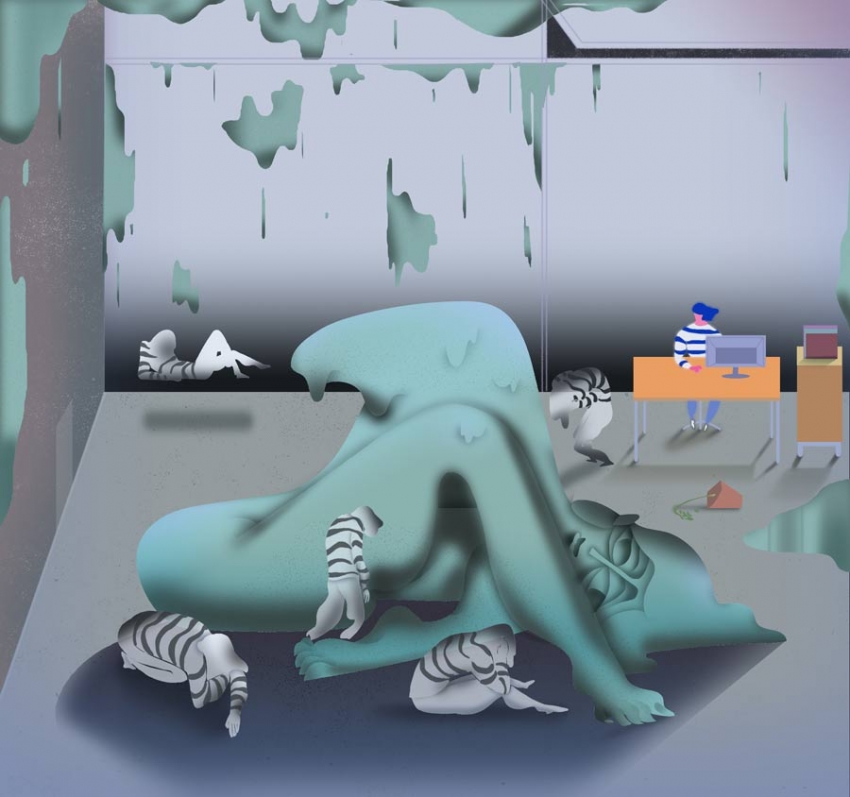 Is Neoliberalism Making Our Depression and Anxiety Crisis Worse?

How capitalist culture is making us sick.

Neoliberalism makes us miserable by creating a society designed solely for buyers and sellers. Then it uses the pain caused by such a dystopian project as an excuse to tell us our brains are broken and that they’re going to have to sell us even more things—drugs—to fix them.

A few days before Donald Trump was inaugurated as president, I travelled to San Francisco to accept a curious invitation from one of his campaign’s funders. Peter Thiel, the billionaire founder of PayPal, and his venture capital fund in Silicon Valley, were organizing a day-long conference to help design apps that would deal with depression, anxiety and addiction—which are on the rise in the United States.

I was in the middle of researching my new book, Lost Connections: Uncovering the Real Causes of Depression—and the Unexpected Solutions. Everything I had learned suggested to me that the very idea that an app could solve these problems was a symptom of the deep cultural misunderstanding fueling these epidemics. But I was curious, so I touched down as San Francisco readied its protests against the incoming president. The conference ended up giving me a subtle education on the relationship between the ascendancy of neoliberalism and the United States’ burgeoning mental health crises.

Throughout the day, some of the country’s most important scientists spoke about their research into these problems. Yet, as the day went on, something baffled me. If all you knew about depression, anxiety and addiction was what was presented at this day-long conference, you would have thought these conditions were caused by malfunctions in people’s brains. We looked at pictures of brain scans and talked about internal brain mechanisms. One group of scientists said they aimed to eradicate depression by 2050—but the focus of their research was entirely biological.

The only reference to any factor outside the human skull involved the role of childhood trauma, which was mentioned in passing. I spoke last, and I wasn’t sure how candid to be. I had by that point spent three years investigating the causes of depression and anxiety. I had interviewed some of the world’s leading social scientists and learned that, in fact, there’s overwhelming evidence that depression and anxiety are, to a significant degree, responses to deep social forces. To name a few: If you are controlled and have little autonomy at your work (like life in most corporations), you are more likely to become depressed.

As your society becomes more unequal, you are more likely to become depressed. If you have job insecurity, you are more likely to become depressed. I tried to think of a metaphor to explain my puzzlement at the focus of the conference. It would be perfectly possible, I said, to describe the plot of Romeo and Juliet using Newtonian physics. The atoms move in Romeo’s body one way, and the atoms in Juliet’s body respond, and on and on. It would all be true, but you wouldn’t understand a thing about why anybody in the play does anything. It would miss the point.

Coincidentally, the conference took place within walking distance of the Tenderloin district, an area where homeless people with addiction and depression problems congregate. I urged everyone to walk over there, talk to the first person with an addiction they met, listen to their life story, and then come back and say the central problem in that person’s life was a malfunctioning brain.

Indeed, John Cacioppo, Ph.D., a professor at the University of Chicago, had taught me that our brains change as a result of how we live our lives. London taxi drivers, for example, have to memorize the map of London in a fiendishly difficult test to get their licenses. Their brains look different on brain scans than yours or mine not because they are diseased, but because they use them differently. In a similar way, experiencing extreme inequality, or lack of control at work, or childhood trauma, also causes your brain to change—and recovering from these blights changes your brain once again.

Cacioppo says we need to think in terms of “social neuroscience”—your brain is reshaped by social forces. It’s not that the scientists speaking at Thiel’s conference didn’t, at some level, know about the social factors that drive depression, anxiety and addiction. I had long and interesting conversations with many of them that night. But in their public presentations, these factors—the most crucial ones—had fallen into a cultural blind spot.

The public debate for decades now has focused on biological factors, like the notion that depression is caused by low serotonin, a myth that has been shown to be demonstrably false. And this is where neoliberalism comes in. Neoliberalism, a system of thought that has steadily advanced throughout my lifetime—I’m 39—instructs us to build a society around one core insight: that human beings are atomized individuals who approach life by rationally maximizing their own self-interest.

As Margaret Thatcher put it when I was a kid, “There’s no such thing as society. There are individual men and women and there are families.” Neoliberalism poses many problems, but perhaps the most neglected is that it has supercharged our current crisis of depression and anxiety. All human beings have natural psychological needs: to feel we belong, to feel we are secure, to feel we are valued, to feel we have a secure future we can understand. These are ingrained in us all. Neoliberalism does a very poor job of meeting these psychological needs, in part because its theory of human nature doesn’t match with human nature.

All humans crave connection—to other people, to meaning, to the natural world. So we have begun to live in ways that don’t work for us, and it is causing us deep pain. We live as deeply lonely individuals, primed to believe life is about acquiring the unnecessary products we see in advertising, left to scream at each other through screens to mask how distressed we feel. Yet during the rise of neoliberalism, an alternative explanation for this distress was sold to us, largely by for-profit drug companies: the biomedical model.

They told us our distress is due to spontaneous chemical imbalances in our brains. This was promoted largely by pharmaceutical company PR departments rather than by scientists. I believed this story for 13 years, because when I went for help with my own depression a doctor explained my distress to me this way. But as Laurence Kirmayer, M.D., a professor at McGill University in Montreal, told me, we have ended up with “a grossly oversimplified picture” of depression that “doesn’t look at social factors [or] basic human processes.”

So, neoliberalism makes us miserable by creating a society designed solely for buyers and sellers. Then it uses the pain caused by such a dystopian project as an excuse to tell us our brains are broken and that they’re going to have to sell us even more things—drugs—to fix them. Both neoliberal economics and the biomedical model are now discredited. Neoliberalism crashed the global economy in 2008 and is on its way to crashing the planet’s ecology.

The United Nations—in its official statement for World Health Day in 2017—explained that “the dominant biomedical narrative of depression” is based on “biased and selective use of research outcomes,” and that this “causes more harm than good, undermines the right to health and must be abandoned.” While chemical antidepressants have some value, they cannot solve these problems for most of us; at best, they take the edge off the symptoms for some. The U.N. statement added that we need to move from “focusing on ‘chemical imbalances’ to focusing more on ‘power imbalances.’ ”

Yet neoliberalism and the biomedical model live on as zombie ideas, stalking our everyday lives. I’m not suggesting the relationship between them is in any way a conscious process—it certainly isn’t. No: neoliberalism trains us to think of ourselves as atomized individuals, and this patterns how everyone—including scientists—looks at the world.

Even more importantly, it provides financial incentives only for those ways of responding to distress that can be monetized and sold. I learned from my research, for example, that startling and solid evidence shows that exposure to the natural world reduces depression and anxiety, but since there is little money to be made in selling access to the oceans, woods and mountains, these treatments are ignored. Many similar paths out of depression and anxiety lie, neglected, beyond the boundaries of a neoliberal ideology. That day in San Francisco seemed to me a perfect expression of these forces coming together.

It was a conference organized by one of the richest men in the world, preaching the gospel of Ayn Rand while enthusiastically funding a project to make the world even more unequal and dominated by corporations—and the conference was dedicated to saying that the thick tar of distress spreading around us and dragging us down was simply due to malfunctioning amygdalae, missing brain chemicals and other neurological defects.

A few days after the conference ended, on the day of the inauguration, I went to the Golden Gate Bridge. At the moment when Trump was sworn in, I took part in a long human chain, holding hands, stretching across the bridge, showing our resistance to the new age that is upon us. I cried as I looked out over the bay, at how beautiful it was and how frightening the coming four years would be.

Many others on the bridge that day wept, too. It seemed to me then—in line with all the social science I had learned—that this was a more powerful compass for finding our ways out of depression and anxiety than any picture of an individual brain scan. We defied the neoliberal script. We didn’t go shopping, or try to maximize our economic selfinterest. We reached out to each other—to connect with what is truly meaningful in life

Johann Hari is a British journalist. He has written for many of the world’s leading newspapers and magazines, including the New York Times, Le Monde, the Guardian, the Los Angeles Times, The New Republic, The Nation, Slate, El Mundo, and the Sydney Morning Herald. He was a lead op-ed columnist for the Independent, one of Britain’s leading newspapers, for nine years. You can follow him on Twitter at @johannhari101