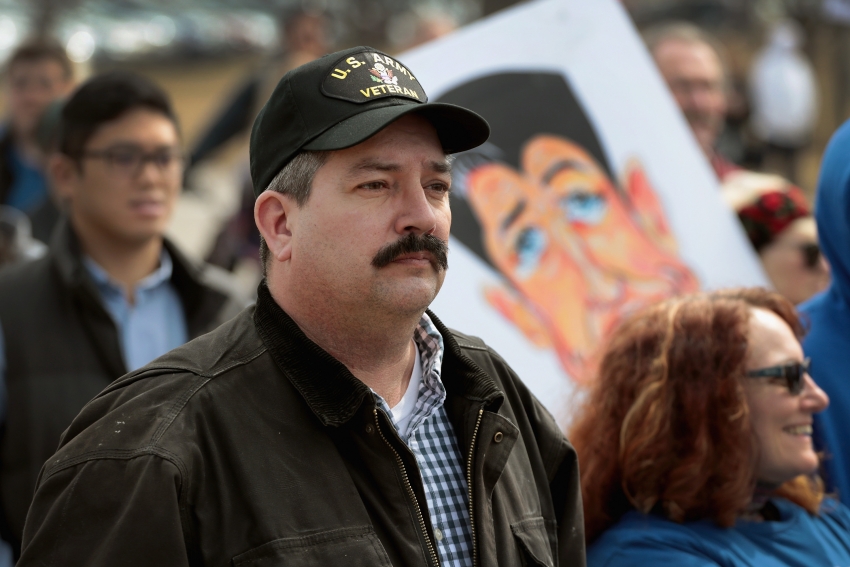 With Ryan out, Paul Nehlen, an open white supremacist, is the leading Republican, while Randy Bryce, a progressive populist, is running as a Democrat.

"More and more Republicans are realizing that the wave is coming and they don’t want to grapple with that.”

The choice is not quite socialism or barbarism in the race for House representative in Wisconsin’s First Congressional District, but it’s looking awfully close.

Yesterday—following months of rumors—news broke that House speaker and P90X workout enthusiast Paul Ryan won’t seek re-election for the House seat he’s held for 20 years. The decision is a clear boon for Democratic challenger Randy Bryce, an ironworker and union organizer running as a progressive populist on a strong left platform, and whose entry into the race last summer may have helped prompt Ryan’s early retirement. Bryce has been endorsed by Bernie Sanders, Our Revolution, the Working Families Party and other progressive forces, and he has raised around $4.75 million since entering the race. Before going into the midterms in November, Bryce will have to win an August 14 primary against another progressive, Janesville teacher Cathy Myers, who has criticized national Democrats’ backing of her opponent.

Since Ryan’s announcement, the Cook Political Report has changed its prediction for the race from “solid Republican” to “lean Republican,” and polls could shift even farther in Democrats’ favor in the coming weeks.

With Ryan out, Paul Nehlen, an avowed white supremacist, is now the leading Republican in the race. (Another GOP candidate, Nick Polce, has also registered for the August primary, but has raised just $17,799 compared with Nehlan’s $160,000.) Nehlen’s recent exploits include getting kicked off of Twitter and PayPal for making inflammatory racist and anti-Semitic statements. He was even removed by Gab—an online haven for the alt-right—for doxxing an opponent alt-right troll. Nehlen is a strong supporter of Donald Trump and last year retweeted a tweet by fellow white nationalist Jason Kessler calling the neo-Nazi rally in Charlottesville, Va. an “incredible moment for white people who’ve had it up to here & aren’t going to take it anymore.” On former KKK grand wizard David Duke’s podcast, Nehlen contended that “Jews control the media.”

Asked about Nehlen’s campaign, Bryce tells In These Times that “it shows that we have a lot of work to do when someone like that is a potential nominee for a mainstream political party…The fact that he’s picking the Republican party to run in, I think that says a lot.”

Bryce—who, in 2011, organized to stop passage of Wisconsin’s infamous anti-union law Act 10—is running on a platform that includes instituting Medicare for all and a $15 minimum wage, abolishing ICE and putting in place a Green New Deal. Taken together, his agenda represents a kind of antithesis to the anti-union, Koch Brothers-backed Republicanism that has ruled Wisconsin politics for the last half-decade under Gov. Scott Walker. “Looking at the blue wave that's taken place throughout the country, it seems like they're really hard-up for credible candidates,” Bryce says of the GOP.

While Gov. Walker’s office did not respond to a request for comment, Wisconsin’s Republican Party has denounced Nehlen and appears to be scrambling to find a primary challenger to step in for Ryan in advance of the June 1 filing deadline. Wisconsin State Assembly Speaker Robin Vos, State Senator David Craig and former White House Chief of Staff Reince Priebus have all been floated as possible candidates.

“It says all kinds of things,” Bryce adds of Nehlen’s candidacy, “especially in these days where we have somebody like Donald Trump who won’t speak out against an event taking place in Charlottesville and then travels over to Arizona to pardon [Sheriff Joe Arpaio] from criminal offences and then right after that goes after the DREAMers.”

As loathsome as Nehlen is, he may have been right about one thing in a recent statement to the Wisconsin State Journal: “I am a member of the Republican Party regardless of what their traitorous, spineless apparatchiks believe…my America First agenda ha[s] a place in the Republican Party.”

On the other side of the aisle, Wisconsin Democrats appear to have wind in their sails. In late March, a judge ordered that Walker must promptly hold special elections to fill vacant legislative seats, which could lead to more Democratic victories. Last week, liberal judge Rebecca Dallet was elected by a wide margin to the State Supreme court. In January, Democrat Patty Schachtner won a state senate seat that had been held by the Republican Party since 2000. Early this summer, the Supreme Court could decide whether to redraw the state’s heavily gerrymandered electoral map, which would give Democrats a much stronger shot at retaking the legislature in November.

Rep. Greta Neubauer—a progressive millennial representing Racine, the second largest city in Wisconsin’s First Congressional District—says: “Republicans are jumping ship. My read of Paul Ryan’s retirement is that he looked at the political climate, realized he could spend $25 million, lose to Randy Bryce and end his political career. He’d rather take a back seat, wait a couple of years and figure out what to do next.

“Everyone I talk to is feeling hopeful in a way that they have not in a long time,” she says. “Seats where Democrats have not run in many years are absolutely in play this year…more and more Republicans are realizing that the wave is coming and they don’t want to grapple with that.”

Bryce was similarly optimistic. “When we first got in and talked about repealing and replacing Paul Ryan, there were a few people that said it’s an impossible task,” he says. “Today we’re halfway there: we have the repeal part done, and now we need to replace him.”