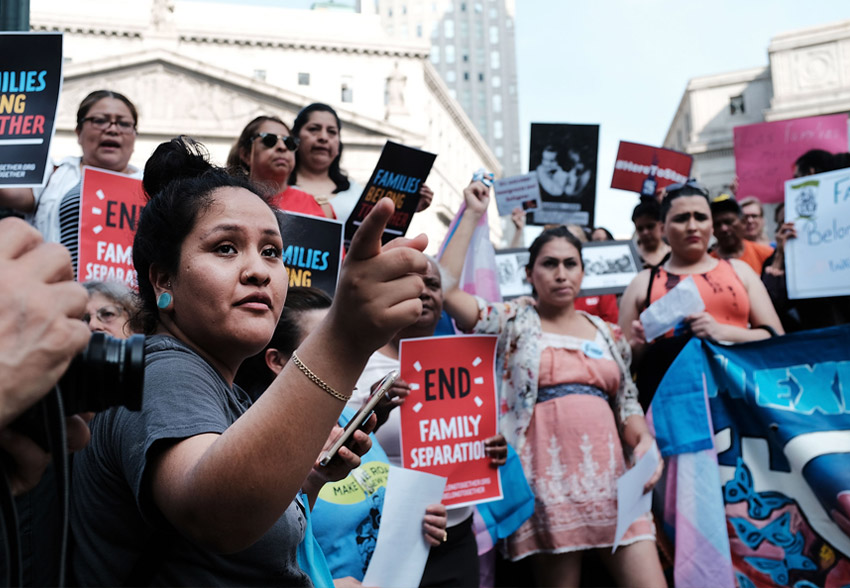 Hundreds of immigrant rights activists participate in a rally at the Federal Building in lower Manhattan on June 1, 2018 in protest of Trump's policy that is separating migrant families at the border. (Spencer Platt/Getty Images)

A conversation with Eve Stotland, director of legal services for The Door.

At least 600 parents and children have been separated in recent months at the border.

Eve Stotland: My name is Eve Stotland. I am the director of legal services at The Door, A Center of Alternatives in New York City.

Sarah Jaffe: We are talking because there are a lot of emotions running really high, and there is a lot of confusion about what is actually going on with the Trump administration’s new—and some not-so-new—immigration policies. Let’s start out really basic and talk about what is going on that has people so angry.

Eve: There are a few things going on, and I think that some of them are getting conflated, so it is really helpful to pull them apart. One thing that is absolutely going on involves the U.S. government, and very specifically Customs and Border Protection and Immigration and Customs Enforcement—these are two agencies that are in charge of policing our borders and enforcing our immigration laws. These agencies, when they detain families, when they are arresting families at the border for violating immigration laws, they are separating parents and children.

What is new here is that Immigration did not have the same policy at the border of separating parents and children. That is something that has developed recently. It is hard to track exactly when it started because the federal government is not being honest about it. One day they say there is no new policy. The next day, they say there is a policy. Then, Trump blames the Democrats for the policy.

The amount of intentional misinformation that is going out there is really intense, but what we do know is because people at the border, including the ACLU, have been tracking this and have brought a lawsuit about it. We know that at least 600 parents and children have been separated in recent months at the border.

Sarah: This story and the story of 1,500 young people who are not currently being tracked are getting conflated and a lot of people are justifiably angry and upset. Can we go through that story, as well, and talk about the question of, “Who are these children that are missing?”

However, one thing that the government is not doing is losing children. The government has not lost immigrant children. What happens—and I really am an expert in this who has been doing this work at The Door for many years, I have been doing this work over a course of 10 years—is that when children arrive at the border unaccompanied, they are taken first by immigration enforcement officials, either Customs and Border Protection or Immigration and Customs Enforcement and they are detained in pretty bad conditions, in what are called hieleras. The kids and the immigrants call them hieleras. They are iceboxes, very cold, and the ACLU just issued a report about the level of abuse by Customs and Border Patrol and ICE of children in these hieleras.

And then, wonderfully, they are released to the community. I say “wonderfully” because I have a 10-year-old daughter and I believe that she is safest with me. We presume in this country both in a personal capacity and our laws and policies is that the best place for children is with their parents or broader families. That children do not belong in institutions. They certainly don’t belong in detention. But, that they really belong in family settings.

So, our children are much safer in their communities and in their families than they are with the federal government. They are much healthier with their families and communities than they are in detention centers. But, something that happens when you give children back to their families, when you unite them with their families, is that they go from one relative to another, or the relative moves and doesn’t leave a forwarding addres,s or if the parent or relative is undocumented, when the authorities call up trying to find out what happened to this child, they don’t call back. It’s because they are very afraid of the federal authorities.

Sarah: The federal authorities are doing all they can to encourage that fear.

Eve: That is right. People like the Attorney General, Jeff Sessions, President Trump, Kelly. We hear them all saying, “You should be scared.” So, guess what? People are scared. They don’t want to be found. But, it does not mean that they have lost their children.

Sarah: Now that we have disentangled some of this a little bit, can you talk a little bit about the way that policy has shifted? It is obviously getting worse and tending more towards criminalization under Trump, but this is a tendency that goes back a couple of decades now.

Eve: Yes. The government has had the right to charge people who enter without permission, who enter the United States, cross the border or come through a port of entry without proper permission with a crime for many years. It was a power that the government used quite sparingly. Mostly, it is more efficient and faster just to deport people, especially if we don’t want to pay for their detention, which costs taxpayers money. And especially if the government’s goal is to get people out of the United States and back home.

There are already some due process rights and some bureaucracy that goes along with deporting people and a lot of expense that goes along with deporting them. If you are going to do a criminal prosecution, it just adds to it. So, the government is going to be detaining people for longer periods of time, paying for that for longer periods of time. Now, you are not just doing an Immigration prosecution, you are doing a federal criminal prosecution. You have an attorney on that, you have a judge. It requires a lot of resources, so the government used to only use it when they had something somewhat extraordinary happening.

Now, the government has decided to use it to terrorize families and as a way to force separation of families. So, there is no federal family criminal detention. There are no such beds. I am not advocating for such beds, but there are no such beds. So, if any person—immigrant or non-immigrant—is charged with a federal crime and is going to be sent to a federal detention center for alleged criminals, they will not be able to take their children. So, by charging people whose crime is that they entered the country illegally by charging them not just with illegal entry, but a criminal act, the immigration officials and the federal government succeed in changing the type of detention and ensuring that they are able to split up parents and children.

Sarah: We are, rightly, in the middle of a firestorm of anger about all of these things. People are planning marches and rallies and things. So, now that we have sort of pulled some of this apart, what can people do and what are the things that they should be thinking about as demands in this moment? What kind of things can be done and what are the kinds of things that would actually be beneficial for people to direct their anger towards?

Eve: I will absolutely suggest some concrete steps, but I want to start by saying that President Trump created this problem. This problem could be resolved by him at any point. There is no law, no statute, no case law that requires the government to charge families who enter without proper permission with a crime. For years, most families were not so charged, so this could end this moment if this president and his cabinet decided that it could end this moment. It is really important for people to know that because there is so much misinformation.

I am an attorney and I do believe in the rule of law. Sometimes when we advocate for more humane policies, or humane policies, we have to get the law changed. Here, we don’t. The law is just fine. We are advocating that people stop doing something that they absolutely can stop doing without any passage of legislation.

About the separation of parents and children, I think it is so important that people educate themselves, because these issues are complicated and because there is a lot of misinformation going around; some of it because the issues are confusing and some of it intentional. That is, President Trump is lying about what is happening. So, educating yourself and educating your friends is really important, because we do have to know what the problem is before we can ask people to resolve it.

So, many of the families who are separated are Central American and they are going to go to places where there are the strongest most vibrant Central American immigrant communities, which include New York, Texas and California. So, if you live in one of those states, almost for certain, there is a lot that you can do to serve this community and help this community right in your city or town.