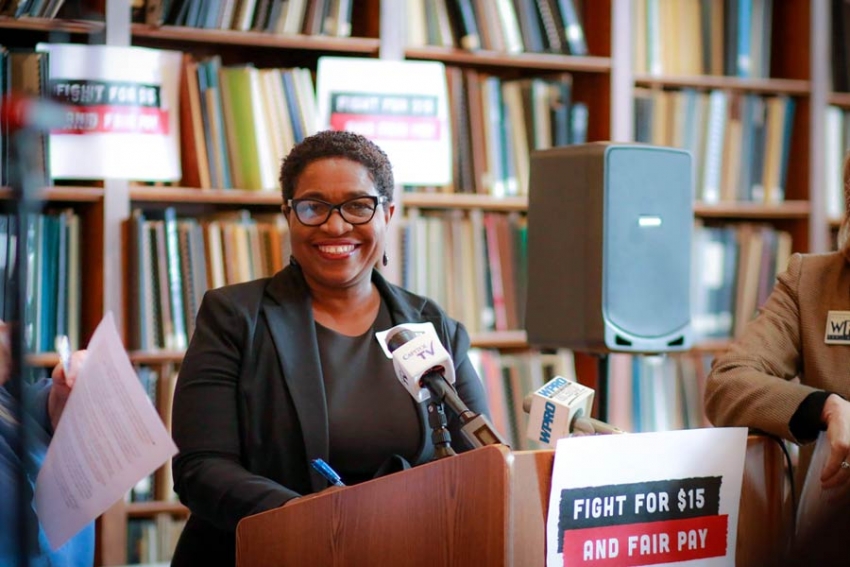 Rhode Island Elected A Slate of Progressives in 2016. Now Centrists Are Coming for Them.

The Democratic Party establishment is launching a counterinsurgency.

Ranglin-Vassell was passed over for endorsement in favor of Holly Taylor Coolman, an antichoice Providence College theology professor who identifies as a “traditional” Democrat.

PROVIDENCE, R.I.—“I am the only candidate in District Five who is fighting to protect a woman’s choice,” said incumbent state Rep. Marcia Ranglin-Vassell, a black woman, Jamaican immigrant and progressive Democrat, to more than a dozen volunteers in her backyard July 14. “I believe that women should have access to safe abortions.”

Ranglin-Vassell and her supporters were preparing for a long day of canvassing. “Marcia trusts women,” campaign volunteer Carolyn Morgan wrote to In These Times in an email. “I adore her!”

Ranglin-Vassell ’s trust in women stands in stark contrast to a Rhode Island Democratic Party that, in June, endorsed a slate of centrist Democrats—several with questionable records on women’s issues—over progressive women. For a “blue” state, Rhode Island has long been conservative on issues such as guns, abortion and even voter ID. (It is the only state with a voter ID law passed by a Democratic-majority legislature.) Ranglin-Vassell was passed over for endorsement in favor of Holly Taylor Coolman, an antichoice Providence College theology professor who identifies as a “traditional” Democrat.

The term “traditional Democrat” comes from Johnston, R.I., Mayor Joseph Polisena, who coined it in May in a surprisingly blunt address before a state party platform committee meeting. “Many [traditional Democrats] are pro-life, many believe in the Second Amendment,” Polisena said. “They want … to reduce the burdensome state and federal regulations.” They also oppose carbon taxes and taxes meant to fund single-payer healthcare, he added.

Polisena was contrasting his views with an insurgent progressive wing of which Ranglin-Vassell is part. Two years ago, with the endorsement of the Rhode Island Working Families Party (WFP), she ousted pro-gun, pro-tax cut R.I. House Majority Leader John DeSimone by a mere 17 votes in the Democratic primary. DeSimone had held that seat for 24 years. Ranglin-Vassell’s election was a huge upset and a progressive shot across the bow of the state’s Democratic Party power structure. Three other WFP-endorsed candidates also won that year.

That power structure fired back in June with its endorsements. In House District 3, Trump voter Michael Earnhart was endorsed over WFP-backed state Rep. Moira Walsh. In state Senate District 35, Gregory Acciardo, a former state senator who has been accused of domestic violence (charges were dropped) and convicted of drunk driving, was endorsed over progressive candidate Bridget Valverde, the vice president of the Rhode Island Democratic Party Women’s Caucus.

After widespread backlash, the party rescinded these endorsements, but other dubious choices remain, including the endorsement of Coolman and John Carnevale. Coolman, a Catholic theologian, opposes the pro-choice Reproductive Health Care Act, and Carnevale has faced allegations of sexual assault (charges were dropped upon the victim’s death) and domestic violence.

The party’s suspect endorsements can be linked to its unusual and arcane process. Every House and Senate district has a District Committee, at least in theory, whose sole purpose is to make endorsements—but there is little transparency. Ranglin-Vassell’s District Committee was full of holdovers loyal to the previous office-holder, including DeSimone’s older brother. Where committees are defunct—as in Trump supporter Earnhart’s district—the endorsement decision is made unilaterally by the state party chairman, though after this year’s controversies he is abdicating this role.

The Rhode Island Democratic Party says that to receive a party endorsement, a candidate must ask for it. Coolman, however, insists she never asked, and found out about the endorsement reading the local newspaper.

An endorsed candidate gets a star next to their name on the ballot and free access to the Voter Activation Network (VAN), a voter database essential to Democratic campaigns. Unendorsed candidates pay $1,600 to access the system. In small races, that’s a lot of money.

“Given all the facts surrounding the endorsements, I respectfully ask my opponent to return the ‘unrequested endorsement,’ ” tweeted Ranglin-Vassell.

“I will consider that suggestion,” Coolman tells In These Times. “My concern is that, now, people who are huge supporters [of mine] and have given time, energy, etc., are very happy about this.”

The primary is September 12.

Steve Ahlquist is a Providence-based independent reporter and editor of UpriseRI.com.