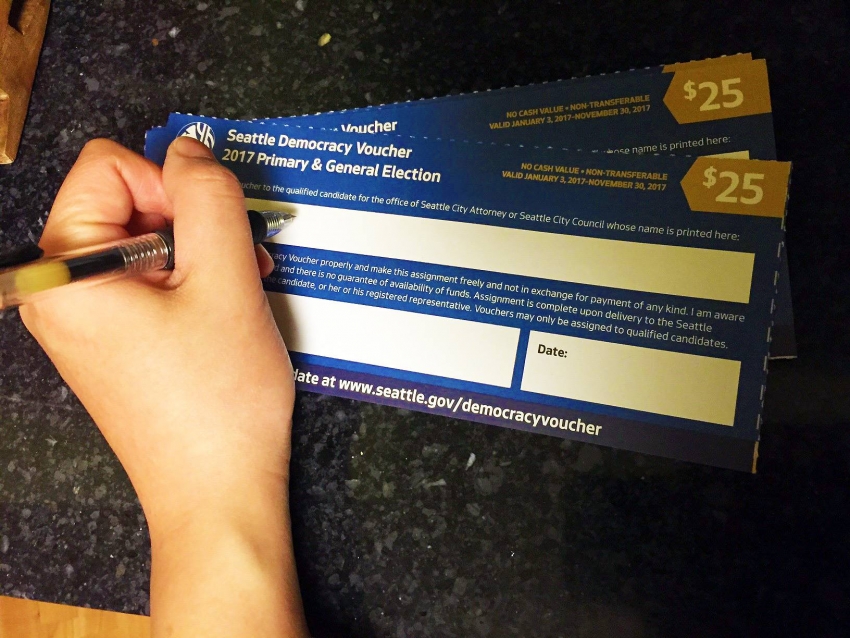 Unlike matching funds, democracy vouchers require no out-of-pocket donation. Therefore, anyone, regardless of wealth, can participate. This is a radical expansion of political inclusion.

With the November midterms just weeks away, more and more media outlets and liberal pundits are predicting huge electoral gains for Democrats.

While much reporting has focused on the potential of such a “blue wave” to flip control of Congress, another less covered aspect of this Democratic insurgency is the ever-growing list of candidates refusing to accept corporate money.

These pledges all speak to the festering anger citizens feel toward our broken campaign finance system.

But while refusing individual corporate donations is laudable, it’s not enough. Individual actions will not change structural pressures that distort our public policy. And they do not make the current donor class any less powerful or break down the barriers women and people of color face when running for office.

Rather, clean campaign finance pledges are merely the gateway to real structural reform. To turn these pledges into concrete progressive action, we should heed the words of Harvard Law professor Lawrence Lessig: “Their words mean nothing unless they have a plan to fix this democracy. First.”

If they are serious about changing the status quo, candidates who refuse corporate money must also act immediately to overhaul our campaign finance system.

Undeniably, achieving such systemic reform presents challenges. Over the past forty years, starting with Buckley v. Valeo (1976)—a case striking down candidate spending caps and independent expenditure limits—the Supreme Court has shackled our ability to regulate political spending. With Brett Kavanaugh now on the bench, a deluge of litigation will likely further restrict our ability to rein in big money in politics.

The good news is that we don’t actually have to limit spending to fix our democracy. Rather, we can lift up the voices of non-wealthy Americans to match the influence of current donors through public financing for congressional and state elections.

While largely overlooked, there are numerous public financing models in cities and states across the country. The United States even has a public financing system for presidential elections—one that helped foster healthy political competition during the 1970s and 1980s. The program, never adequately updated, became obsolete with the rising cost of elections, culminating in 2012, when, for the first time, neither major party presidential candidate used the system in the general election.

Campaign finance reform advocates have long focused on two systems of public financing. The first is modeled after a program in New York City, which matches small-dollar constituent donations to participating candidates at a rate of 6-to-1. This system boosts the power of small money, giving donors of all backgrounds a greater voice in our democracy.

The second system, based off of an existing one in Maine, is full public financing of elections. Under this program, once a candidate raises a specified small dollar contribution from a select number of constituents, the state will provide a grant to fund a candidate’s entire campaign. Participating in this program is optional, but once candidates take public money, they can no longer accept any private money.

These programs have operated with success. Candidates in states with full public financing spend less time fundraising and more time with their constituents. Moreover, under public financing systems, there is more candidate and donor diversity. The impact of small donors is also increased.

What’s most exciting for reform advocates is that, as of 2017, a new public financing system has been added to our toolkit. And it has game-changing potential.

In 2015, Seattle voters approved a first-of-its-kind public financing system that gives every city resident four $25 vouchers, or, “Democracy Dollars,” that can be allocated to qualifying municipal candidates. To ensure maximum participation, every registered voter is mailed the vouchers. (Non-registered, eligible voters can apply for a voucher.)

Unlike matching funds, democracy vouchers require no out-of-pocket donation. Therefore, anyone, regardless of wealth, can participate. This is a radical expansion of political inclusion.

And while modest political giving may seem routine or inconsequential, it can have profound implications for how citizens connect to our political institutions—and to society as a whole.

“The Democracy Voucher program made me feel like becoming visible in our local democracy,” Susan Russell, an affordable housing advocate and formerly homeless Seattle resident, explained to Washington Can, a Washington-based community organization. “It made [me] feel like I was valued. I got to donate to a candidate who made clear my voice mattered. It was huge. These vouchers gave me a voice.”

In early 2017, Jon Grant, a candidate for the Seattle City Council who lost in the general election, helped enroll members of the city’s homeless population in the program. In March of that year, he explained in a press release: “Seattle has been particularly cruel to its homeless community members by constantly sweeping encampments. If the homeless were brought into the political process and could access democracy vouchers to fund candidates who fight for their interests Seattle might start taking a more compassionate approach.” Homeless donors, among others, helped the Grant campaign raise $300,000 in vouchers over the course of the campaign.

The voucher experiment is still young—we only have data from one election cycle—and there is clearly room for improvement, but the early results speak for themselves.

In the first year of the program, the total number of donors approximately tripled from 2013. Nearly 90 percent of voucher users were new local election donors and low- or moderate-income voters and voters under age thirty were better represented among voucher users than cash donors.

Voucher-collecting candidates also raised a much higher percentage of their overall funds from constituents than their non-voucher and pre-voucher counterparts. Moreover, evidence shows that vouchers encouraged more candidates to run.

Following Seattle’s success, the concept of vouchers is starting to spread. The New York City Council is considering supplementing its public financing program with vouchers. And the cities of Austin, Texas and Albuquerque, New Mexico are also examining the idea.

In New Hampshire, campaign finance reform advocates have launched a campaign to implement “Democracy Dollars” for state elections. The New Hampshire legislature failed to pass such a system in 2017, but Olivia Zink, executive director of Open Democracy, a non-partisan, pro-democracy organization, explains to In These Times that, “We feel optimistic about our changes in the upcoming year.”

Railing against the current campaign finance system is just the first step for candidates who believe our electoral system is fundamentally broken. To change the status quo, candidates must pair their condemnation with concrete policy solutions. And while many Democratic challengers seem to now understand this reality, we must continue to hold their feet to the fire—for only such systemic reform can help revive American democracy.