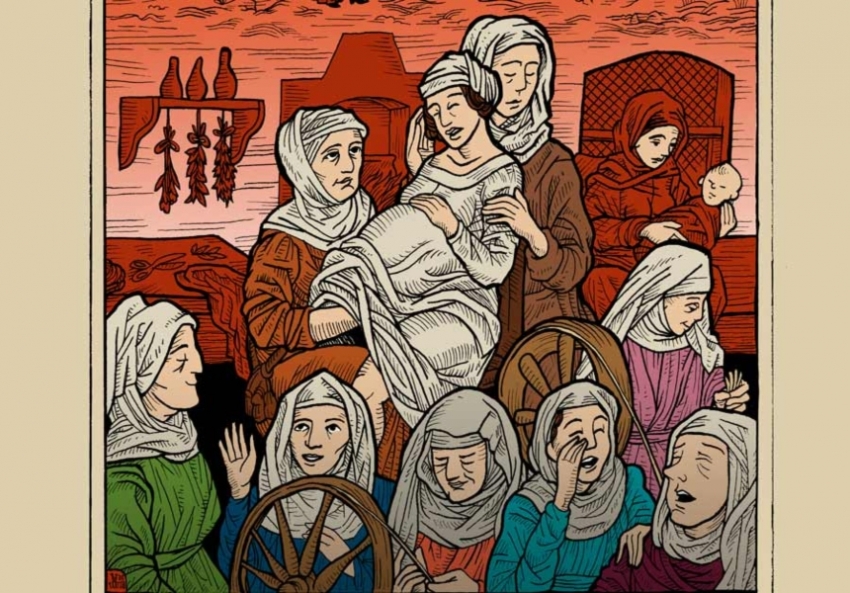 How Capitalism Turned Women Into Witches

Sylvia Federici’s new book explains how violence against women was a necessary precondition for capitalism.

The Italian socialist feminist Silvia Federici is mandatory reading to understand gender politics in 2019. The opening sentences of her 1975 pamphlet “Wages Against Housework”—“They say it is love. We say it is unwaged work”—will stick in your head and change your whole concept of family. Caliban and the Witch, her titanic 1998 work on witch trials as a tool of early capitalism, will take your head apart and put it back together.

Federici is not just relevant but getting more so every second. Throughout her work, she traces how capitalism affects and infects the “private,” feminine sphere of unwaged domestic and reproductive work; she excavates intimacy, uncovering all its toxic layers of lead paint and asbestos, until its exploitative foundations are clear. Her work is essential to decoding the present moment, as capitalism and patriarchy entwine to produce increasingly grotesque offspring: predatory adoption agencies coercing women into giving up their babies; the exorbitant cost of childcare causing single working mothers to go bankrupt; entire industries where the opportunity to abuse women with impunity is a perk for the powerful men up top. And, thank goodness, we seem to know it; half the young leftist women writing today are riffing on Federici’s work.

Federici’s latest, Witches, Witch-Hunting and Women, updates and expands the core thesis of Caliban, in which she argued that “witch hunts” were a way to alienate women from the means of reproduction. In the transition from feudalism to capitalism, Federici argues, there was an intervening revolutionary push toward communalism. Communalist groups often embraced “free love” and sexual egalitarianism—unmarried men and women lived together, and some communes were all-women—and even the Catholic church only punished abortion with a few years’ penance.

For serfs, who tilled the land in exchange for a share of its crops, home was work, and vice versa; men and women grew the potatoes together. But in capitalism, waged laborers have to work outside the home all the time, which means someone else needs to be at home all the time, doing the domestic work. Gender roles, and the subjugation of women, became newly necessary.

Early feudal elites in rural Europe enclosed public land, rendering it private and controllable, and patriarchy enclosed women in “private” marriages, imposing on them the reproductive servitude of bearing men’s children and the emotional labor of caring for men’s every need. Pregnancy and childbirth, once a natural function, became a job that women did for their male husband-bosses—that is to say, childbirth became alienated labor. “Witches,” according to witch-hunting texts like the Malleus Maleficarum, were women who kept childbirth and pregnancy in female hands: midwives, abortionists, herbalists who provided contraception. They were killed to cement patriarchal power and create the subjugated, domestic labor class necessary for capitalism.

“The body has been for women in capitalist society what the factory has been for male waged workers,” Federici writes in Caliban, “the primary ground of their exploitation and resistance.”

The elegance of this argument, the neat way it knots together public and private, is thrilling. There are moments when Federici makes sense like no one else. In this passage, she explains how sexuality—once demonized “to protect the cohesiveness of the Church as a patriarchal, masculine clan”—became subjugated within capitalism: “Once exorcised, denied its subversive potential through the witch hunt, female sexuality could be recuperated in a matrimonial context and for procreative ends. …In capitalism, sex can exist but only as a productive force at the service of procreation and the regeneration of the waged/male worker and as a means of social appeasement and compensation for the misery of everyday existence.”

In other words: A man can fuck his wife to produce a son and heir, and he can fuck a sex worker to blow off steam, but it serves him well to keep the sex worker criminalized and the wife dependent; both are workers, and he, as the boss, does not want them to start making demands. See: the Stormy Daniels-Donald Trump saga, or men’s panicked reaction to #MeToo when the women they’ve treated as luxury goods start talking back.

The pleasures of Witches occur in quick little bursts of illumination. Federici dips in and out of her famous argument, expanding it, updating it and finding new angles on it. Some essays work better than others. Her exploration of gossip and its criminalization is a stand-out; she traces a concise and damning history of how “a term commonly indicating a close female friend turned into one signifying idle, backbiting talk,” and how that act of women speaking to each other—often about men, and in a way those men might not like—became punishable by torture and public humiliation, as in the case of the “scold’s bridle.” This torture device, which was used until the early 1800s, was a mask with a bit (sometimes lined with spikes) that kept a woman from moving her tongue. Gossips, like witches, were criminalized for being women. Federici is always timely: Today’s “whisper networks,” in which women share the identities of abusers and harassers to keep each other safe, are gossip too. And, as accused rapist Stephen Elliott’s lawsuit against Moira Donegan and the Shitty Media Men list proves, plenty of men still want gossips hauled into court.

In other spots, I’m less convinced. Federici spends lots of time analyzing contemporary African witch-hunting in the context of globalism. Though she is deeply invested in African politics, I wished she had spent more time exploring the differences between Medieval Europe and present-day Africa.

The concept of “witch,” or evil magic user, varies by culture. A Ghanaian man, a Navajo woman and a white Evangelical preacher in Louisiana will all define “witchcraft” differently. Federici often seems to be exporting to Africa the European medieval template—wherein witches are women who supposedly gained their powers by having sex with Satan and eating babies, and whose threat was inherently tied to “deviant,” independent female sexuality—to a cultural context that does not quite fit it.

I don’t doubt Federici when she says that African witch-killings come from the same sources as medieval panics: capitalism, an influx of fundamentalist Christianity, the need to seize land by eliminating its owners. But the differences do matter. In parts of Central and West Africa, the prototypical accused witch is not an old woman (as in Europe) but a child, often the child of a recently divorced or widowed parent. There is something vital to be said about how capitalism cruelly eliminates children who strain their community’s resources, and by treating “witch hunts” as one unified cross-cultural phenomenon, the chance is lost.

These are quibbles about a book that I suspect readers will love regardless. The point of reading Federici is not to agree with her at all times—it’s to let her knock the dust and cobwebs out of your mind, to open up new roads of thought and spark new curiosities. Opening this book at random will always bring you to a sentence that does that, as when Federici explains why witches are commonly old: “Older women [can] no longer provide children or sexual services and, therefore, appear to be a drain on the creation of wealth”; or ties witches to other historical insurrections: “the portrayal of women’s earthly challenges to the power structures as a demonic conspiracy is a phenomenon that has played out over and over in history down to our times” (Witches was published a few weeks before a Catholic exorcist held a special mass to protect accused sexual predator Brett Kavanaugh from … witches). Each sentence will also open doors into her other work. This is not the Federici book to end with, but it may be the one to pick up when you’re ready to start.

Read a chapter, “On the Meaning of 'Gossip,'” from Silvia Federici's book, Witches, Witch-Hunting, and Women.