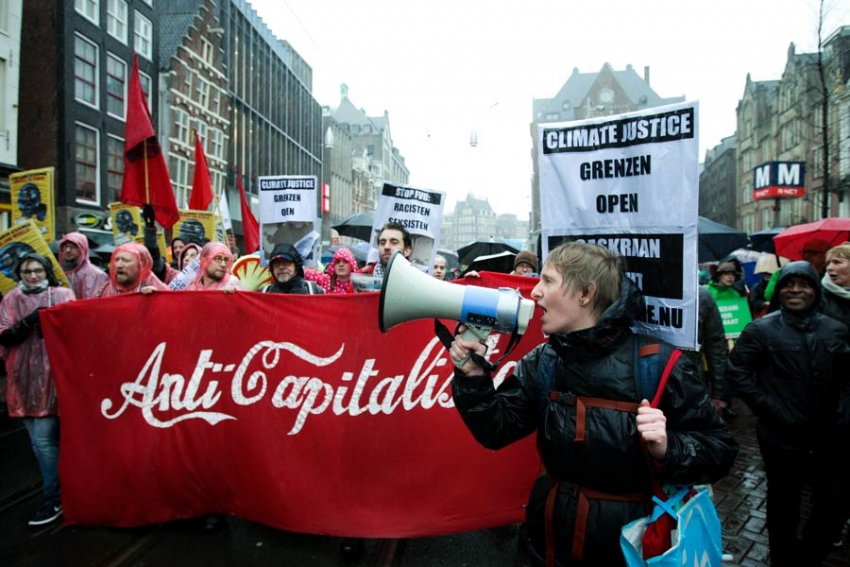 An estimated 40,000 people rallied March 10 at the Climate March in Amsterdam, pushing the Dutch government to move faster on climate action. Twenty-six percent of the Netherlands sits below sea level. (Photo by Paulo Amorim/Nurphoto via Getty Images)

We Can’t Beat Climate Change Under Capitalism. Socialism Is the Only Way.

The changes needed to avert environmental catastrophe are incompatible with capitalism.

The Intergovernmental Panel on Climate Change (IPCC)’s landmark October 2018 report declared that preventing runaway global warming will require “far-reaching transitions in energy, land … and industrial systems” for which there is “no documented historic precedent.” Oxford University climate scientist and report author Myles Allen explained, “It’s telling us we need to … turn the world economy on a dime.”

To make this turn happen, we need a carefully planned and democratically administered emergency program for ecological reconstruction. But such a program is not remotely reconcilable with capitalism’s imperatives of profit maximization and growth, not to mention private ownership of the means of production. In other words: We need system change to beat climate change.

Under capitalism, economies must grow at a minimum compound rate of 3 percent to remain healthy. “Any slowdown or blockage in capital flow will produce a crisis,” wrote Marxist geographer David Harvey in a 2010 paper. “If our blood flow stops, then we die. If capital flow stops, then the body politic of capitalist society dies.” This generally means a slowdown in investment, falling wages and widespread unemployment.

But given our finite planetary resource base, this incessant growth is killing us. A recent review of hundreds of scientific studies showcases the direct link over the last half-century (during the so-called Great Acceleration) between economic growth, energy use and carbon emissions. While the original New Deal helped spur this uptick, the Green New Deal must wind it down.

Some sectors of the economy require immediate contraction. According to the think tank Carbon Tracker, 80 percent of known fossil fuel reserves need to be kept in the ground if we are to avert temperature rise above 2 degrees Celsius (3.6 degrees Fahrenheit). But much of these reserves are controlled by fossil fuel corporations accountable only to investors. To maintain their value and market share, these companies must continue to extract and sell these reserves and discover new reserves to replace them. Contraction is inimical to growth, so it’s “Drill, baby, drill.”

How can we dismantle this planet-destroying extractive economy? Free-market solutions and incentives like carbon taxes have, where implemented, failed to significantly diminish fossil fuel consumption (part of why the big oil and gas companies support them). A dramatically higher carbon tax might work to effectively bankrupt these corporations, but it would not give the public any control over how the closure of these industries takes place, risking job loss and economic disruption.

Rapid and equitable decarbonization, then, means putting these corporations under public control—i.e., nationalizing them, through buying out the majority of their shares. Writers at The Democracy Collaborative estimate a price tag of around $1.15 trillion. This may sound expensive, but remember: Over the next decade, Trump’s tax cuts will give $2.3 trillion to the rich.

This assault on private property will no doubt trigger fierce resistance from elites. To overcome this opposition, we will need a massive, organized anti-capitalist movement.

The phaseout of fossil fuels must be economy-wide, including winding down, finding alternatives to, and supporting affected workers from fossil fuel-dependent industries like petrochemicals, agribusiness and aviation, and much superfluous industrial production—not to mention the arms industry and the military. A campaign against militarism, and for a Global Green New Deal, would require challenging the intra-state economic and military competition upon which capitalism relies.

While the net effect will be to contract production, we must also invest in selective growth in certain sectors, from renewable energy to organic farming, as well as low-carbon, socially necessary activities such as education and the caring professions. This will involve reversing the neoliberal capitalist dogma that has imposed austerity for decades.

The Indigenous Environmental Network (IEN) applauds the vision, intention and scope of the Green New Deal resolution but insists on “the fundamental need to challenge and transform the current dominant political and economic systems that are driving forest destruction, social injustice and the climate crisis.”

“An economy based on extracting from a finite system faster than the capacity of the Earth to regenerate,” IEN argues, “will eventually come to an end.” Our demands for reform must precipitate what comes next. As the IEN puts it, “To reclaim our future, we must change the present.”

For a response to this piece, see “We Don’t Have Time to End Capitalism—But Growth Can Still Be Green.​”

Ashley Dawson is the Currie C. and Thomas A. Barron Visiting Professor in the Environment and the Humanities at the Princeton Environmental Institute. He is the author of two recent books on topics relating to the environmental humanities: Extreme Cities: The Peril and Promise of Urban Life in the Age of Climate Change (Verso Books, 2017), and Extinction: A Radical History (O/R Press, 2016).