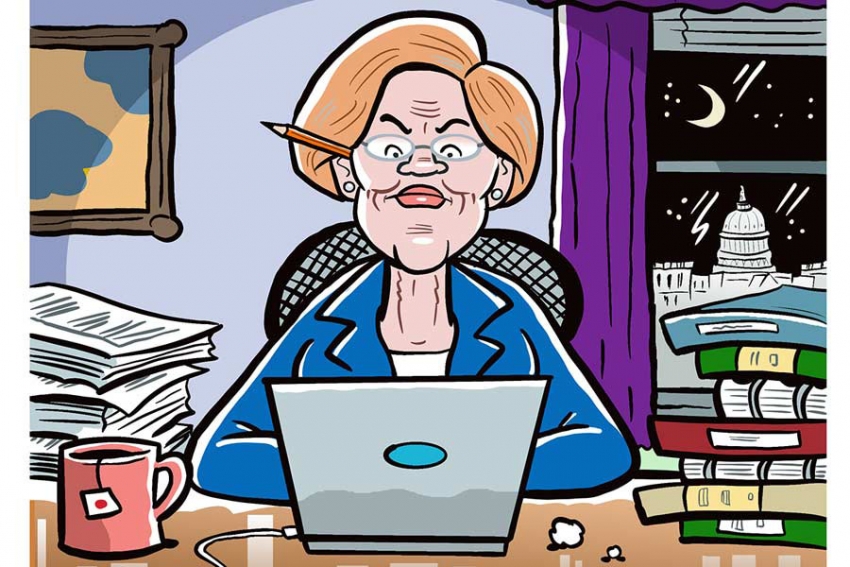 America fell in love with the Warren who went viral dressing down bank CEOs and oblivious regulators, who told Citigroup that the post-crash regulation should have “broken you up into little pieces.”

I was riding an UberPool home from a demoralizing dead winter dinner shift in the midst of a pregnancy scare when Elizabeth Warren’s universal child care proposal hit my feeds. I had made $225.46 before taxes that night; my babysitter had taken home $160, and she’d need a substantial raise if I had a third. The Warren plan promised to cap day care costs at 7% of household income. If day care costs were income-based, I could have three wall-vandalizing, juicespilling, lipstick-smearing, toilet paper-unravelling, time-murdering children, and I wouldn’t even have to be a waitress to begin with. I could be an adjunct history professor!

I gave $27.50 to the Warren campaign that night. Given her single-digit polling numbers, I realized I stood a better chance of finagling my way into Norwegian citizenship than she had of becoming president, but I wanted the proposals to keep coming. It felt like I was getting something for my money, like I was funding a think tank, a real think tank, not a tax-exempt front for a confederation of lobbying interests staffed by former Hillary aides, but an incubator of vital ideas and solutions in waiting for a Sanders administration.

The policy statement stream persisted: the proposal to undo Amazon and Facebook’s acquisition binges; the $500 billion plan to build millions of affordable homes; the plan to force agricultural equipment manufacturers to open-source operations so farmers can repair their own machines; the $100 billion plan to radically expand opioid addiction treatment; the proposal to ban fossil fuel extraction on publicly owned lands and make public parks free; the $1.25 trillion plan to cancel student loan debt and make college free. And a raft of targeted new taxes that would finance all these plans: on corporate profits higher than $100 million, inheritances more valuable than $7 million, net worth greater than $50 million.

I would have gladly pitched in more tax dollars to fund most of her agenda, but tellingly, #TeamWarren never asked. So I kept pressing those irritating DONATE buttons. I wasn’t alone. By March the whole lamestream media, from the New York Times to CNBC, was singing the praises of Warren’s proposal mill. A typical Guardian column pronounced her the “intellectual powerhouse of the Democratic party.” Behind that powerhouse, Warren had amassed the 2020 contest’s largest salaried campaign staff, 161 strong by The Hill’s count.

But combing Warren’s Federal Election Commission filings for names to put to this brain trust, I began to feel a bit seasick. Staffer after staffer had cut her (or his) teeth campaigning for Hillary. And upon closer inspection, a fair number of #TeamWarren’s plans reeked of Clintonite horse-shitism (also, pandering 12-figure-pricetag never-gonna-happen-ism.) One section of the housing plan relies on “leveraging” each dollar spent with 10 dollars in private sector funds, which is to say, classic neoliberal profiteering. The hysterically priced $1.2 trillion student debt forgiveness package avoids any changes in Warren’s OG area of expertise, the federal bankruptcy code—which, in denying bankruptcy (unconstitutionally) for student debt, quite literally created the student loan disaster. I asked Alan Collinge of Student Loan Justice what was up. He said Warren’s staff is maddeningly weird on the issue: full of promises one month, incapable of returning an email the next, generally more interested in “throw[ing] money at” the problem than addressing the salient structural flaw. He surmised she was taking orders from the Center for American Progress (CAP). Warren advisor Ganesh Sitaraman, whom Collinge identified as her point person on student loans, is a CAP senior fellow.

At best, as the Boston Globe has detailed, #TeamWarren is using the wonkspam as a marketing tool: Churn out meaty white papers, then ask for cash to keep the ideas in the “conversation.” But it’s not Warren’s “ideas”—at least in the mealy watered-down Beltway thought-leader sense—that we need. It is her (inimitably well-informed) rage. America fell in love with the Warren who went viral dressing down bank CEOs and oblivious regulators, who spent five minutes detailing the extent to which Citigroup alums had infested the Obama Administration before telling the bank that Dodd-Frank’s major flaw was that it should have “broken you up into little pieces”; whose low-key interrogation tactics induced a New York Fed president to essentially confess colluding with Goldman to hide another bank’s balance sheet hole from European banking authorities; who led the charge to fire the head of the agency overseeing Fannie Mae and Freddie Mac for being too bank-captured to write down any of the millions of underwater mortgages it owned after the 2008 crisis, then publicly eviscerated his replacement for the same exact thing a year later. The Old Warren was never so interested in feeling your pain as she was articulating your pain, to the rich white billionaires inflicting it.

The Old Warren was unabashedly unafraid to tackle two things no other 21st century politician really had: arcana, and the wholesale capture of Democratic Party politics by the big banks. These two things are symbiotic—every election cycle the Democrats bet that stupid Americans’ inability to comprehend the former will continue to obscure the latter. And every election cycle, those same Americans revolt against the bank-backed centrists the Democratic Party pushes on them: by embracing Obama in 2008, the Tea Party in 2010, Bernie Sanders then Donald Trump in 2016, Alexandria Ocasio-Cortez in 2018. I’m not saying those Americans are all the same, or that they aren’t ever stupid—shit, I genuinely believed Obama would be an antidote to all this back in 2008, and that was stupid!—but they know what they don’t like, and that is (preachy, endlessly self-satisfied) millionaire Democrats who take marching orders from trillionaire banks. But where Bernie never had much of an appetite for annotating the fine print behind our neoliberal malaise, or calling out the Democratic committee staffers-turned-bank lobbyists who drafted it, Warren always seemed invigorated by the naming of names and parsing details of scams. That is why, as one banker quoted in New York magazine put it, she “strikes fear in [the] hearts” of Wall Street executives, despite her dreary poll numbers, even more so than Sanders: They regard her as more competent.

The old terrifyingly well-informed Righteous Warren made a brief reappearance on a CNN town hall in April, when she described reading the section of the Mueller report in which Trump attempts to get White House Counsel Don McGahn to fire Mueller, then attempts to get McGahn to refute the stories about it, then tries to gaslight McGahn into agreeing that Trump never used the word “fire,” then chews out McGahn for having taken notes. Having two toddlers and a profound cynicism toward Russiagate, I hadn’t gotten so far in the report. But Warren has a way of returning moral clarity well after outrage fatigue has set in, and she made a compelling case that we didn’t have to let yet another rich white guy get away with murder. We may have let Chuck Prince and Angelo Mozilo and the Magnetar guys and the London Whale guys off the hook, but maybe if we hadn’t, we wouldn’t have this crook in the White House now.

She had a point. But she shouldn't narrow her sights. Warren knows more intimately than any other politician how deep and wide the population of rich American villains has grown. They are everywhere, artificially inflating our housing costs and our drug prices, our interest rates and our opioid addiction rates and our carbon emissions. Having sworn off big-dollar fundraising, now is when Warren should be welcoming their hatred—and exposing the cowardice of phony populists like Joe Biden who have instead welcomed their $2,800 checks. Her fury is what the Left needs.