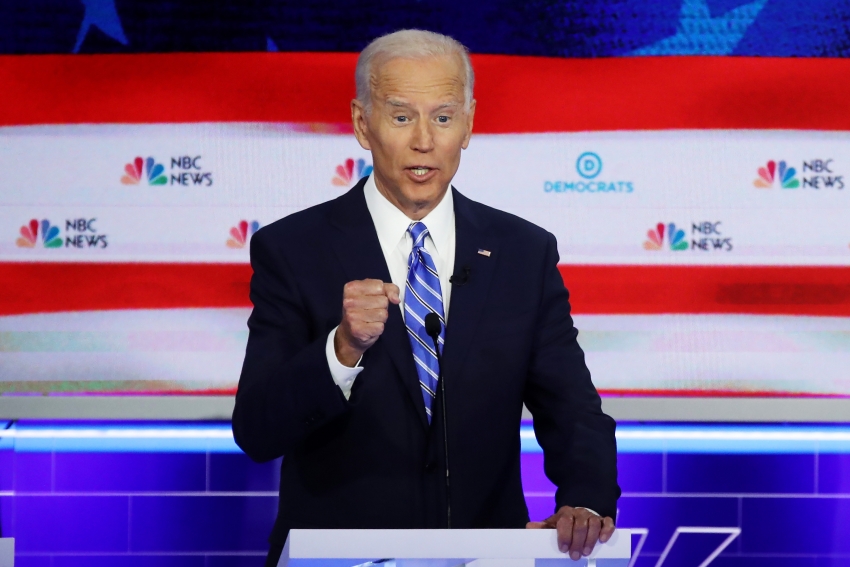 The knives were out for Biden during Thursday's Democratic debate. (Drew Angerer/Getty Images)

From immigration to tax deals, Thursday night’s debate saw the troubling records of both Biden and the Obama administration put on trial. It’s long overdue.

The debate indicated that cracks are forming in the Obama-Biden administration's invulnerability to Democratic criticism.

Joe Biden could have sat this campaign out, retired, and been fondly remembered by the American public as Barack Obama's goofy yet loveable vice president. Instead, he chose to run for president one last time, and as a result guaranteed that he’ll be remembered for his actual record.

Thursday night was a rough one for Biden. It was always going to be, not just because the candidate—who has assiduously avoided unscripted media appearances since announcing his run—has a poor record of success as a campaigner. Biden’s deep-rooted role as a centrist “neoliberal” Democrat has saddled him with a long, checkered history for his opponents to pick apart.

And pick apart they did. Thursday's debate saw several of Biden's rivals assail him for a record that sits uneasily with the more progressive direction of today’s Democratic Party. And Biden—who entered the night as the clear frontrunner—didn’t do himself any favors by frequently stumbling over his words and even making nonsensical statements.

The first crack came on the subject of immigration. As Biden boasted of his immigration record (“We all talk about these things, I did it!”), moderator Jose Diaz-Balart reminded him that “the Obama-Biden administration deported more than three million Americans,” prompting a camera cut to a confused-looking Biden. This topic opened up space for Sen. Kamala Harris (D-Calif.) to criticize not just Biden but the legacy of the Obama administration, explaining that she had “disagreed with my president” on the issue of unjust deportations.

Biden's defense of his record on immigration was wholly unconvincing. Biden said he would “surge immediately billions of dollars worth of help” into Central America to tackle the root causes of people fleeing, before referencing a “bipartisan agreement” he had secured at the very end of Obama's second term. Biden was likely referring to a plan inserted into the administration's 2016 budget request that came to be known as “Biden's billion.”

The trouble is, by funneling hundreds of millions of dollars to abusive security forces in the region, and by setting aside funding for Central American governments to prevent migrants from reaching the U.S. border, Biden's bipartisan agreement both fueled the root causes driving people to flee and ramped up the cruelty they faced. This was not a first for Biden. He had, in his own words, been “one of the architects” of the Clinton-era Plan Colombia enacted in 2000, which combined increased militarization in Colombia with opening the country up to foreign investment. The plan resulted in not just heightened violence, but economic and environmental exploitation, further driving people out of the country, and was replicated in the Obama-era Alliance for Prosperity for Central America 15 years later, also spearheaded by Biden.

During his time as vice president, Biden didn’t engage in the kind of warm and fuzzy bromides about protecting immigrants that we heard Thursday night. As late as 2014, Biden bragged that the Obama-Biden administration was “enhancing the enforcement and removal proceedings” against migrants, and warned that anyone making the trip should “be aware of what awaits them” because it “will not be open arms.” Indeed, one need only read the stomach-churning details of an ACLU lawsuit over the treatment of migrant children from that year to understand that he was being serious. Biden paid lip service to “hav[ing] to deal with the root causes” then, too.

The next major hit Biden took was over his opposition to busing and defense of his friendly relationships with racists and segregationists. It was Harris, again, who took Biden to task over these positions, with Biden hitting back that he “did not praise racists, that is not true,” and that he “did not oppose busing in America.”

Neither of these statements is true. Biden's opposition to busing is, at this point, well-worn territory, but it's worth cycling through some of his statements on the matter: the claim that busing was “the atom bomb of anti-discrimination weapons”; “the single most devastating issue that could occur to Delaware”; that he'd made it “reasonable for longstanding liberals to begin to” oppose it as a policy; that it was a “liberal train wreck.”

Biden's statement that he hasn't praised racists is clearly debunked by his recent defense of his positive relationship with dyed-in-the-wool segregationist Sens. James Eastland and Herman Talmadge. But that’s not all. In his 2003 eulogy for segregationist and notorious sexual predator Strom Thurmond, Biden called Thurmond “a brave man” who “truly wanted to help.”

Even centrist Michael Bennett got in on the action, rejecting Biden's prediction that Republicans will experience a sudden change of heart and wish to work with a Democratic president once Trump is out of office. Bennett also excoriated an Obama-era deal on taxes Biden boasted of making with Mitch McConnell as a “complete victory for the Tea Party.”

“It does sound as if you haven't seen what's been happening in the United States Senate over the last 12 years,” remarked moderator Chuck Todd.

But it was the second exchange with Harris on the issue of race that began a gradual unraveling for Biden throughout the night. Attempting to defend his record on civil rights, Biden rattled off a series of policies he'd been involved in before abruptly stopping of his own volition, saying, (perhaps allegorically), “My time's up, I'm sorry.”

Biden later appeared to defend the powerful and increasingly far-Right National Rifle Association (NRA), saying the “enemy is the gun manufacturers, not the NRA.” In response to a question about what single issue he would prioritize upon winning the presidency, he oddly answered, “make sure that we defeat Donald Trump.”

Of course, Biden wasn't the only candidate to misrepresent his record on stage. Harris claimed the mantle of police accountability by mentioning her support for police body cameras, which likely came as news to civil rights activists in her home state of California who criticized her in 2016 for opposing measures for greater police oversight. And Kirsten Gillibrand (D-N.Y.) cast herself as a tough-on-Wall Street politician, despite her well-documented history as a loyal ally to banking interests.

But Biden's misrepresentations, and the criticism he faced for his political history, are particularly significant given his now two-month-long reign as the frontrunner for the Democratic nomination. Biden's domination of the early polls has been cited by commentators ranging from Jonathan Chait to Michelle Goldberg as evidence that the desire for change and bold progressivism among voters has been overstated since 2016. The attacks Biden faced last night, and his impulse to put a progressive spin on some unsavory parts of his history, suggest such arguments have been far too hasty.

The 2020 Democratic primary campaign will be long, and one single debate isn't likely to upend the candidates' standing. But Thursday offered a preview of what may well be in store for Biden in the months ahead: the longer he stays in pole position, the more his record will be excavated and the more attacks he'll face from his rivals.

But the debate also indicated that cracks are forming in the Obama-Biden administration's invulnerability to Democratic criticism. As long as Biden stays in the race, his opponents will have more space to point out its flaws without going after the beloved former president himself. This may prove the most lasting legacy of Biden's campaign.