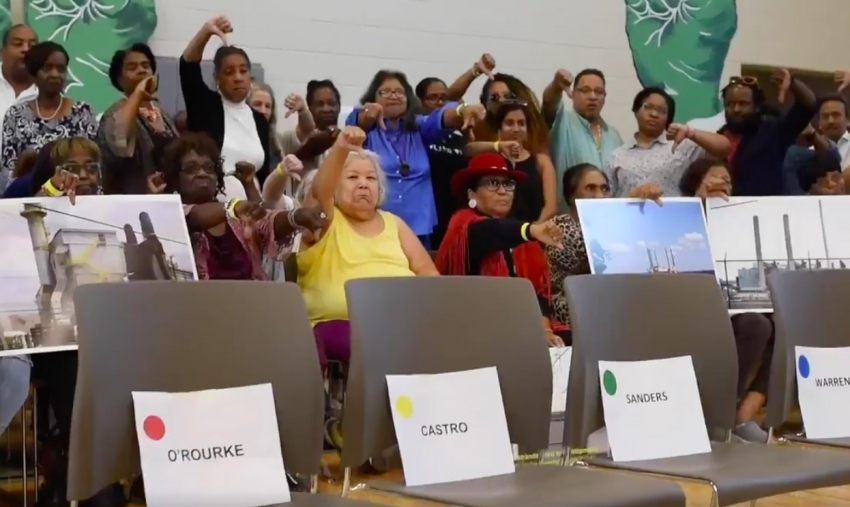 Most candidates tout a just transition for “frontline communities” like Detroit, but only Jay Inslee showed up to meet with residents. Four candidates backed out, and 15 others snubbed the event entirely.

The fact that only one candidate showed up is “quite frankly unacceptable and unstrategic,” says Anthony Rogers-Wright, policy coordinator with Climate Justice Alliance.

Marathon Petroleum Corporation’s refinery lurches across 250 acres of Southwest Detroit like a low-rise steel city of silvery pipes and smokestacks. It looms over Kemeny Recreation Center, where neighborhood children play, getting exposed to pollution with every breath and every turn on the grass outside. The refinery, part of the Ohio-based Marathon’s oil and gas exploration and production empire, has a long history of exceeding legal limits on toxic emissions, contributing to what makes this ZIP code—48217—Michigan’s most polluted.

“We’re on the front lines of climate change right here,” says retired auto plant worker-turned-community activist Theresa Landrum, emphatically ticking off a list of industrial pollutants such as sulfur dioxide, ozone (which creates smog) and other toxic chemicals that have too often been released here in quantities that exceed the legal limits, putting the community at risk for respiratory diseases, cancer and other ailments and developmental delays in children that can be linked to pollution exposure. Landrum, a cancer survivor, said she’s seen too many friends and loved ones die of cancer and other pollution-linked causes.

Detroit’s 48217 could be the poster child for the “frontline communities” bearing the brunt environmental exposures from heavy industry—communities often invoked by this year’s Democratic presidential candidates.

So a coalition of Detroit and national environmental justice activists threw down the gauntlet in advance of the Democratic presidential debates and invited the 20 candidates to skip a few posh fundraisers and visit 48217 instead to see “the frontlines” for themselves. A team of activists even crashed an Elizabeth Warren campaign event in Detroit to urge her to come.

But only one candidate was there at the Kemeny Recreation Center on July 31 to meet with residents and activists: Washington Gov. Jay Inslee, who has centered his entire campaign around the need address climate change.

O’Rourke, Castro and West had pulled out at the last minute. Warren had waffled and eventually canceled.

The fact that only one candidate showed up is “quite frankly unacceptable and unstrategic,” says Anthony Rogers-Wright, policy coordinator with Climate Justice Alliance, a national umbrella group of climate and environmental justice organizations around the country. Climate Justice Alliance helped push candidates to attend, as did Rep. Rashida Tlaib (D-Mich.) and the Sunrise Movement (which also joined the local organizations that spearheaded the Frontline Detroit pre-debate rally and march on July 30.)

Inslee not only attended the meeting on July 31, he visited the neighborhood three times, unveiling his Community Climate Justice Plan in a July 29 press conference outside the Kemeny Recreation Center, with the Marathon refinery as the backdrop. He also took a tour of the 48217 ZIP code. Once the area was home to even more industry, before the auto industry’s decline prompted many companies to pull out, leaving polluted land behind.

More than 8,000 people live in the 48217 ZIP code, predominantly working-class people of color living amid industrial properties in government-financed housing and single-family Craftsman bungalows. Many have nicely tended gardens out front and children’s bikes lying on the lawns. This ZIP code and other highly polluted ones nearby were settled decades ago by African Americans who moved into this isolated area on Detroit’s southwestern limits from the Jim Crow South.

Growing up here, Theresa Landrum watched as a family gas station expand into the mammoth Marathon refinery that processes 140,000 barrels of crude oil into gasoline and other products each day. Environmental justice activists have sounded the alarm for years. Nevertheless, Marathon has continued to grow with the blessing of state and local officials, while activist demands go unattended.

Marathon, which staunchly defends its operating record and says its refinery contributes just 3% to area emissions, is one of 26 industrial operations residents live with every day, according to a report by the the 48217 Monitoring Group. Within 48217 and its neighboring ZIP codes sit steel mills, a salt mine, a Marathon tank farm and DTE Energy Co’s coal-fired plant, complete with the kind of coal ash storage ponds that have burst their banks and contaminated water supplies with arsenic, mercury, selenium and other compounds in North Carolina and other states. The 48217 ZIP code is home to more than half of those operations, with the rest dotting both sides of Detroit’s Southwest city limits.

Heavy trucks traverse neighborhood streets night and day, carrying away the tar sands oil from the Marathon refinery, slag from steel mills, and industrial waste from the myriad other polluting operations. An industrial stench permeates the air, a testament to the pollution people breathe in night and day. In addition to residents’ reports of high cancer rates, a Michigan state report asthma rates are off the charts in Detroit, compared to the rest of Michigan; a fact Landrum and her neighbors know all too well through firsthand experience.

“This community mirrors communities across the nation,” Landrum says. “Black and brown people are being exposed to an enormous amount of chemicals.”

The 2020 race has seen unprecedented talk by would-be presidents about climate justice and making a “just transition” off of fossil fuels that will protect workers and vulnerable communities of color. But the lack of follow through sends the opposite message, says Rogers-Wright of the Climate Justice Alliance.

“It continues the trope that maybe black and brown communities’ health is not as important [to the candidates] as their votes, he says. “We’ve seen some of these candidates easily go into coal country in West Virginia and majority white states and counties” so, he asks: Why couldn’t they take 30 minutes out of their schedules to meet with those on Detroit’s frontlines?

“The optics alone [of last week’s no-shows] don’t look very good at a time when we are coming to grips with the fact that we have an epidemic of white supremacy and nationalism in our country,” said Rogers-Wright, who says ignoring frontline communities feeds into a familiar narrative that poor and vulnerable communities are not a priority.

Nick Leonard, executive director of the Great Lakes Environmental Law Center in Detroit, says he is grateful that the choice to hold debates in Detroit called attention to the environmental justice issues facing the city. But he cautions that a just transition “can mean a lot of things,” including who will get the jobs created to build a new renewable energy economy. While frontline communities are disproportionately burdened with the industrial operations and pollution, they seldom get the jobs created in their communities by those same industries. Whether that will change under a new president remains to be seen, he says.