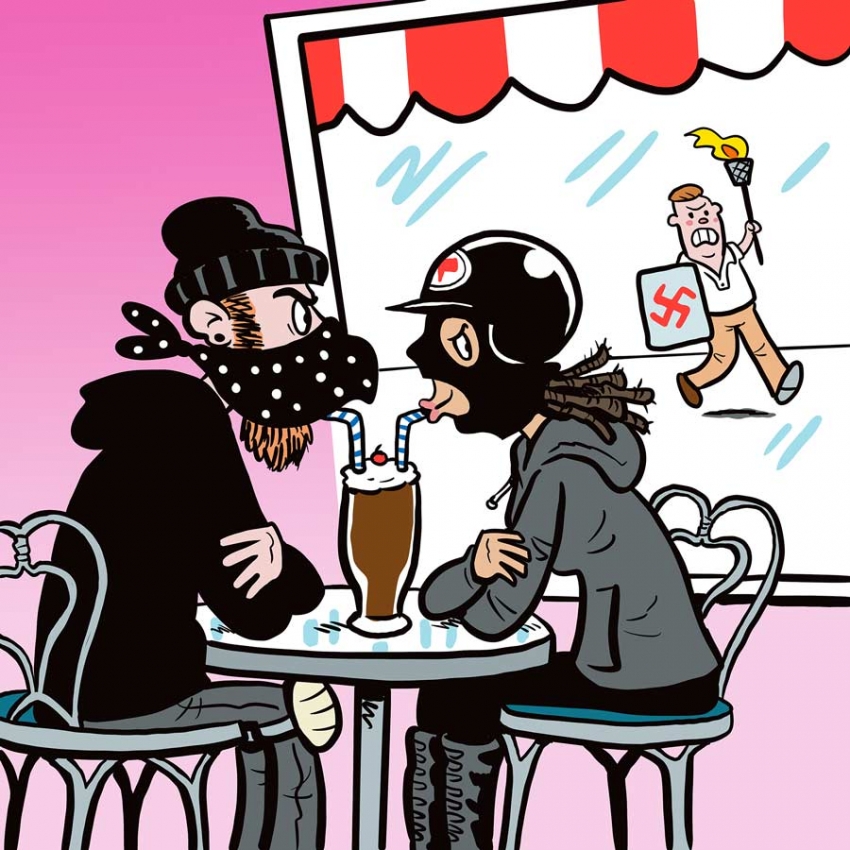 1. A protest movement that opposes fascist groups through direct action

“Consideration is being given to declaring ANTIFA, the gutless Radical Left Wack Jobs who go around hitting (only non-fighters) people over the heads with baseball bats, a major Organization of Terror (along with MS-13 & others). Would make it easier for police to do their job!” —President Donald Trump, in a July 27 tweet

Where does the word come from?

Antifa groups first arose in Italy and Germany in the 1930s as violent fascist organizations grew in those countries. Antifaschistische Aktion, for instance, was a wing of the German Communist Party. After World War II, “anti-fascist committees” re-formed with thousands of members and organized around demands like the removal of Nazis from administrative bodies, prosecution of local fascists and the reestablishment of a public healthcare system.

How did we get from there to throwing milkshakes at right-wing journalists?

According to author and activist Mark Bray, North American antifascism most directly emerged from the punk music scene of the 1980s as Anti-Racist Action groups forced out neo-Nazi skinheads. In fact, anti-fascist actions worldwide have been linked to music and cultural movements. Events like the British Anti-Nazi League’s Rock Against Racism drew thousands to anti-fascist demonstrations.

Today, antifa groups are generally organized independently, consisting of various socialist, communist, anarchist and other anti-racist activists. While some actions have seen physical attacks on right-wing figures, it’s notable that these are often fabricated or exaggerated. Right-wing speculation claimed, for example, that the neo-fascist Proud Boys group had been attacked with cement in Portland, Ore., this summer; it was actually vegan milkshakes.

So is punching Nazis good or bad?

Many liberals and some leftists argue that hurling milkshakes and punches runs counter to free-speech principles and offers a PR gift to the Right. Most antifa activists would likely concede that fighting a few local Nazis in the street will not single-handedly stop fascism.

But, antifa advocates maintain, the far-right groups organizing rallies aren’t merely interested in practicing free speech; their marches are intended as stress tests to see how far they can push their rhetoric and, eventually, actions. With a growing fascist movement in the United States and Europe fueling hate-filled violence and racist political parties, they say, it’s vital these groups be marginalized before gaining power.

This is part of “The Big Idea,” a monthly series offering brief introductions to progressive theories, policies, tools and strategies that can help us envision a world beyond capitalism. For related In These Times coverage, see, “The Left’s Long History of Militant Resistance to Fascism” and “Drawing Equivalencies Between Fascists and Anti-Fascists Is Not Just Wrong—It’s Dangerous.”