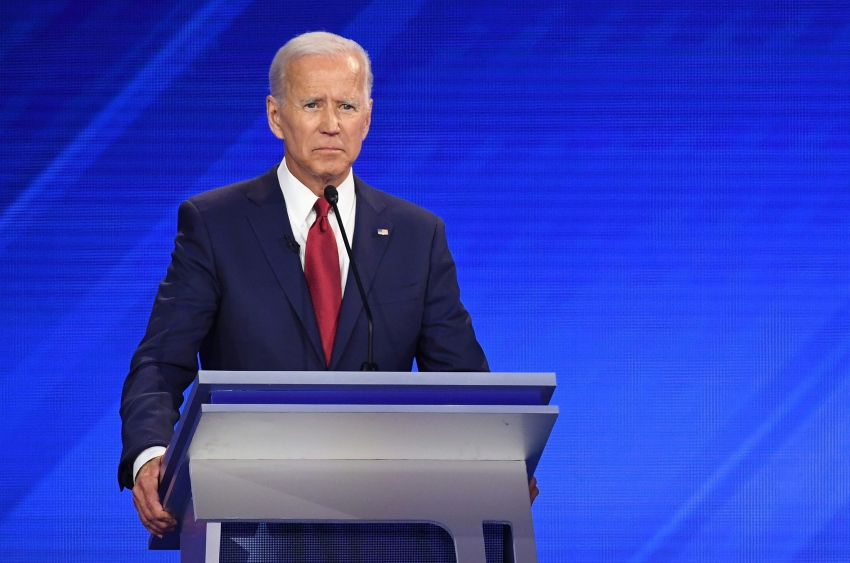 Biden continues to misrepresent his record on the Iraq War. (ROBYN BECK/AFP/Getty Images)

Joe Biden Lied His Face Off About the Iraq War

Thursday night’s Democratic debate featured another attempt by Joe Biden to rewrite his record on the Iraq War.

Biden rolled out a familiar rationalization for voting to authorize the war in Iraq—what would become the most disastrous foreign policy venture of the 21st Century. “I should have never voted to give Bush the authority to go in and do what he said he was going to do,” Biden admitted, before stressing that he had believed Bush’s claim that the president needed the war authorization to have the leverage to send weapons inspectors into Iraq.

Biden then attempted to deal with controversy stemming from comments he made to NPR in early September, in which he claimed: “that moment it started, I came out against the war at that moment.” As I documented for In These Times in July, Biden, in fact, remained a supporter of the war effort long after it began.

“I said—from that point on—what I was argued against in the beginning, once he started to put the troops in, was that in fact we were doing it the wrong way; there was no plan; we should not be engaged; we didn't have the people with us; we didn't have our—we didn't have allies with us, et cetera.”

All of these statements are misleading in different ways. And while Bernie Sanders did use the opportunity to draw a contrast between himself and Biden, pointing out that he’d voted against the war because he had “never believed what Cheney and Bush said about Iraq,” Sanders’ criticism continued to let Biden off the hook when it comes to the full history of his record.

For one, Biden continues to wrongly boil down his role in the Iraq War to his 2002 vote for the war authorization. As I reported for In These Times, Biden was a central figure in leading the march to war.

As chairman of the powerful Senate Foreign Relations Committee, Biden was an influential Democratic voice largely backing President George W. Bush’s calls for regime change in Iraq. As early as February 2002, Biden was telling crowds that “if Saddam Hussein is still there five years from now, we are in big trouble,” that “it would be unrealistic … to believe we can claim victory in the war on terrorism if Saddam is still in power,” and that “dialogue with Saddam is useless.”

That July, Biden told “Fox News Sunday” that if the administration could prove Saddam and al-Qaeda were in cahoots, it would justify a pre-emptive war. While a link between the two was fiction, this claim formed a key element of the Bush administration’s case for war.

That month, Biden held congressional hearings on the subject of invading Iraq. Despite reports that top military brass was uneasy about Bush’s push for war, Biden stacked the hearings with pro-war voices, and opened proceedings by warning that weapons of mass destruction “must be dislodged from Saddam, or Saddam must be dislodged from power.” Former UN chief weapons inspector Scott Ritter, who, along with other experts critical of the administration’s war narrative, wasn’t invited to testify, warned that “Biden's open embrace of regime removal in Baghdad” could turn the hearings into “political cover” for war.

“We have no choice but to eliminate the threat,” Biden later told “Meet the Press” of Saddam Hussein, citing the pro-war testimony he had arranged.

These snapshots illustrate Biden’s leading role in selling the war to the U.S. public. But they also demonstrate he was well aware the Bush administration wasn’t simply planning to send inspectors into Iraq, but rather was set on invading.

If Biden truly believed that his vote in October 2002 wasn’t meant to pave the way for war, he likely wouldn’t have embarked on a world tour two months later that involved meeting an Iraqi resistance leader in Germany, talking to the King of Jordan, and making pit stops in Israel and Qatar. Nor would he have spoken to the Kurd Parliament in Kurdish-controlled Northern Iraq, telling Saddam’s bitter enemies that the United States would “stand with you in your effort to build a united Iraq.”

Nor does Biden’s description of his actions after the war began tell the full story. It’s true that Biden frequently criticized Bush for the way the war was conducted. But Biden was also one of the increasingly lonely Democratic voices insisting that war had been the right decision all along, despite Bush’s bungling of its prosecution.

In June 2003, Biden told “Fox News Sunday” host Tony Snow that “it was a just war.” The next month he said he’d “vote to do it again” and gave remarks to the Brookings Institution in which he charged that “anyone who can't acknowledge that the world is better off without [Saddam] is out of touch.” In August, he called for sending 20,000-50,000 more U.S. troops to Iraq. And in a September speech to the National Press Club, he criticized “the knee-jerk multilateralists in my own party who have not yet faced the reality of the post-9/11 world.” The list goes on.

The U.S. public must make sure the person they select to be president not only demonstrates wisdom, but also won’t be swept away in a tidal wave of pro-war fervor. By allowing Biden to mislead voters on his Iraq War record, his rivals (and the debate moderators) are doing a disservice to the American public.