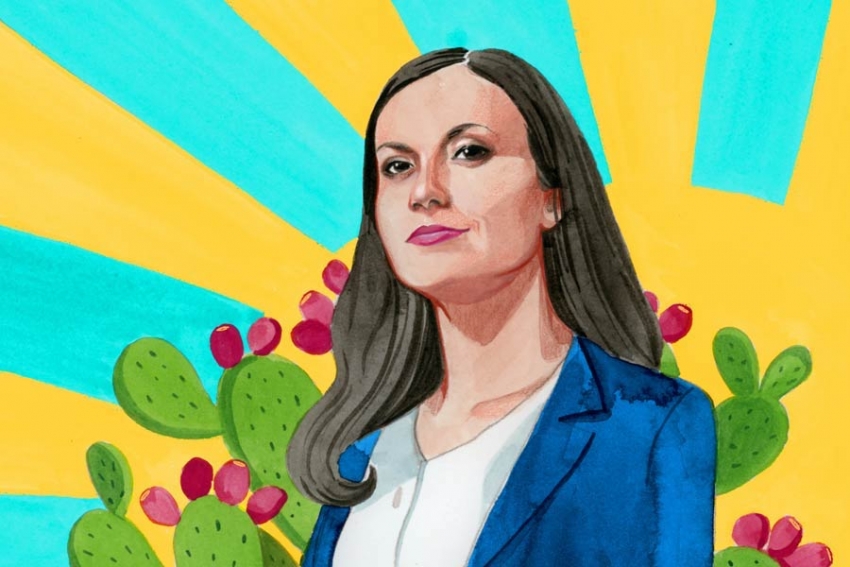 Is Cristina Tzintzún Ramirez the Future of Texas?

"Texans have the ability to change the course of not just our state’s history, but our entire country’s history, when we flip Texas." —Cristina Tzintzún Ramirez

Back in 2013, I was looking to write a big piece about a highly successful workers’ center that hadn’t received national press. Several labor professor friends recommended Workers Defense Project (WDP) in Austin, Texas. I flew down to meet with Cristina Tzintzún Ramirez, WDP’s executive director. I found her whip smart, a born organizer and an inspiring speaker. She took the helm of the then-tiny WDP while a senior at the University of Texas, helping it transform into a force to be reckoned with. The WDP brought national attention to the fact that Texas construction workers have the highest on-the-job death rate in the nation, and then in Austin won Texas’ first municipal ordinance requiring rest and water breaks for construction workers. It got Apple and other companies to guarantee workers on their Austin construction projects receive raises, safety training and workers’ comp, not required in Texas. Tzintzún Ramirez proved adept at working with undocumented workers, union leaders, construction industry execs and lawmakers.

Next, she founded and quickly expanded Jolt, a group to mobilize young Latinos in politics. Several top aides in Beto O’Rourke’s 2018 Senate campaign then pressed her to run in the 2020 Democratic primary in the hope that she could win and take on longtime Senate Majority Whip John Cornyn, a stalwart Trump supporter. They talked her into it. She faces 11 opponents in the March 3 primary. (Disclosure: I have donated $200 to her campaign.)

I recently spoke with Tzintzún Ramirez about how a labor organizer with a progressive agenda might defeat a GOP heavyweight in Texas. The interview has been edited and condensed.

Steven Greenhouse: How has being a labor and community organizer prepared you to run for Senate?

Cristina Tzintzún Ramirez: I have spent a decade and a half thinking about how to make policy solutions for real-life problems that politicians often didn’t even know existed. I learned how to build coalitions. I learned how to raise resources for campaigns. I learned how to work around the clock to win—because the only thing I have that those in power don’t have is time, and the knowledge that you can defeat powerful people by building movements of ordinary people.

Steven: At WDP and Jolt, you developed a reputation as a fighter for Latinos. How would you assure all Texans you will fight for them?

Cristina: I don’t think that disqualifies me to be Texas’ next senator—I think it makes me uniquely qualified. The things that Latino families want are the exact things that every other family wants: Making sure the education system is affordable and accessible. Making sure people have good, living-wage and safe jobs. Making sure families can be together. Making sure our democracy works for everyone.

Steven: What are some ways you would work to help white and African-American communities?

I want to be the senator for everyone. I stand up for Medicare for All because I believe it is the best way to have the highest quality healthcare and to make sure every single American can go to the doctor. I want to tackle the student debt crisis and make sure every single Texas family can send their children to college or trade school. I want to make sure that Texas becomes a leader in transitioning our economy to green energy in a way that creates millions of great jobs for Texans.

I was really proud of my work at the Workers Defense Project. I brought union and non-union workers together, immigrants and American-born together, black, brown and white together to pursue their common interests.

Steven: The Democratic Senatorial Campaign Committee has endorsed one of your 11 opponents, M.J. Hegar, presumably thinking a centrist Air Force veteran has the best chance. Why would a progressive like yourself fare better?

Cristina: There are two strategies to change Texas. One of them has been tried for 20 years and failed every single time—which is to run a moderate Democrat to try and swing white Republican voters.

The other strategy is to embrace the state’s diversity. We are a state that is majority people of color, a state with a long populist tradition, where progressives are hungry for change. Beto O’Rourke was the most progressive statewide candidate I can remember, and he got closer than anybody. In our Senate campaign, we try to speak to everyone—the Black Lives Matter movement, Latino and immigrant communities, the LGBTQ community.

Everybody knows that you don’t win in Texas unless you drive up voter turnout among Latino voters. No Democrat wins without us. Yet there are Democrats running who don’t want to speak to us, who don’t want to fight for us.

There are some people in Washington who think that they know Texas better than Texans. We will prove them wrong on Election Day

Steven: Cornyn will no doubt have a huge campaign chest. How will you defeat him?

Cristina: Republicans know if they lose Texas in 2020, it’s game over for them nationally. So I think every single dirty trick will be played in this race.

Unseating the second-most powerful Republican in the Senate doesn’t come without hard work or substantial resources. It’s my intention to raise those resources from small-dollar donors across the country who understand what’s at stake in Texas. Texans have the ability to change the course of not just our state’s history, but our entire country’s history, when we flip Texas.

Steven: What do you hope to achieve in the Senate?

Cristina: A state as large as Texas can dream big because we are big. I want to position Texas to be a leader in our nation’s transition to renewable energy. We are already the largest wind energy producer. I want to make us the largest solar energy producer and create nearly two million green jobs in Texas—good jobs—over the next decade.

I want to tackle income inequality. In Texas, we work more hours than most people in other states. Yet most Texans struggle to get by.

The other big issue is Medicare for All. In Texas, we have the highest uninsured rate in the country: one in six. Even Americans with health insurance struggle to pay their co-pays, deductibles, premiums. This past week my son was in the hospital twice, and we had a $500 co-pay.

Steven: Texas’ economy has been built in large part by fossil fuels. How do you persuade Texans that the Green New Deal is good for them?

Cristina: As Texans, we don’t run away from big problems. We take them head on. I see climate change as a big problem, but I also see it as a real opportunity, especially for Texas. John Cornyn opposes the Green New Deal because he says it’s too expensive, but he doesn’t calculate the catastrophic cost of doing nothing—the cost for our economy and our environment, and the human cost and suffering, which is incalculable.

No state has more to gain or lose than Texas. Texas has 250,000 workers in the oil, gas and mining industries and 233,000 workers in advanced energy, which will outpace the oil and gas industry in the next few years. So it’s just basic common sense for Texas to support the Green New Deal.

Steven: I deliberately haven’t asked whether it’s hard running with a 3-year-old son—I imagine male candidates don’t get that question.

Cristina: I don’t mind you asking, because it’s the truth. Deciding whether to run was hard. I know that, when men run, they get thanked for their sacrifice of being away, but when women like me run, we get villainized as bad mothers

But I think I could be a great senator and a great mother. I’m running with my little guy, Santi. I taught him how to hand out flyers and say “Vota Mama.” He likes to do that at all the events.

When I’m going out and fighting for the policies and solutions I believe are in the best interest of Texans and Americans—doing that with my son next to me, I know I’m fighting for his future as well.

Steven Greenhouse was a labor and workplace reporter for the New York Times and is author of Beaten Down, Worked Up: The Past, Present, and Future of American Labor.