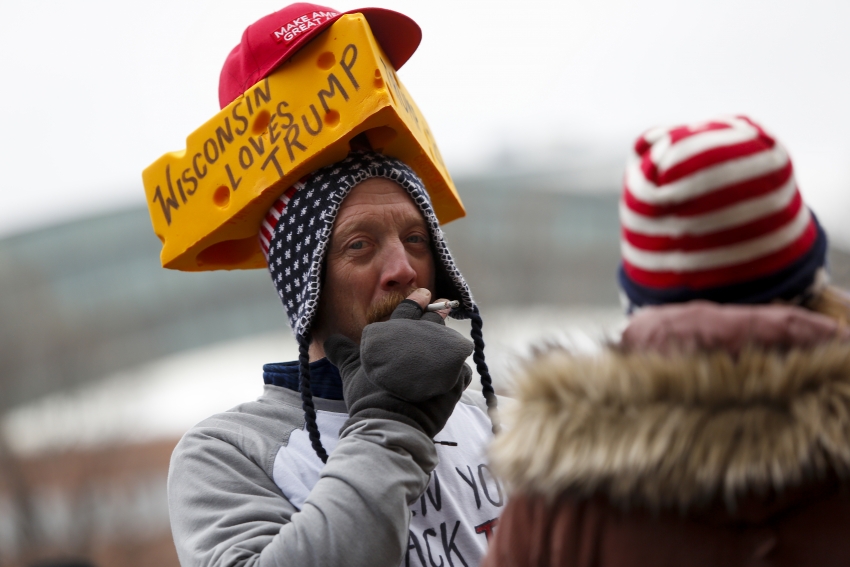 A cheese-head adorned attendee smokes a cigarette ahead of a raucous rally for President Donald Trump on January 14, in Milwaukee, Wisconsin. (Photo by Joshua Lott/Getty Images)

These Blue-Collar Trump Supporters Think the Economy Is Great. Your Move, Democrats.

At Trump’s Milwaukee rally, supporters boasted that he’s ushered in an economic miracle. Democrats face the challenge of convincing them otherwise.

MILWAUKEE—The mood inside Panther Arena at the University of Wisconsin-Milwaukee was euphoric January 14 as Tina Turner’s “Simply the Best” blasted and a crowd of more than 10,000 did the wave—a jubilant sea of red hats, big smiles and arms in the air.

The scene was, at first, reminiscent of the hope, joy and empowerment that swept the country 12 years ago as Barack Obama began his presidential campaign. But as the evening wore on, it became clear that the sentiments permeating the atmosphere were very different from Obama fever: bitterness, resentment and scorn. The crowd’s demographics were likely different as well: predominantly white in one of the most segregated cities in the country, home to a large Black and Latinx population.

This was a rally for President Donald Trump, in the city that will host the 2020 Democratic National Convention in July, in a state that will likely be crucial to the election’s outcome.

Wisconsin’s despair over the loss of good manufacturing jobs, the hardship facing farmers and general malaise helped propel Trump to his unexpected 2016 victory. And if the Milwaukee rally is any indication, Trump is still popular here: Attendees described their growing retirement accounts, their thriving small businesses and greater job security.

In 2016, Trump received fewer than a third of the votes in Milwaukee County but won the surrounding counties. Statewide, Trump garnered 47.2% of the vote to Democrat Hillary Clinton’s 46.5%—a difference of just 22,748 votes.

Democrats now face the challenge of proving to Wisconsinites that Trump’s policies and trade wars are actually hurting working people and that recent market gains mostly benefit the already wealthy—while promoting the idea that true prosperity lies in a social safety net, protective regulations and any number of other measures that Trump derides.

One rallygoer, retired sheet metal worker George Zulas, 73, says his retirement investments are thriving because of Trump and described Democrats as the party of corruption. He pointed to the state of Illinois as an example: Governors often do “two terms [in Illinois]—a term in office and then a term in prison.”

“Union members are supposed to vote Democratic, but [Democrats] haven’t done anything for us,” Zulas says. He thinks many union members will vote for Trump in 2020, but quietly—in fear of retribution in their hiring halls should they openly support Trump.

As In These Times reported, “43% of [2016] voters in union households cast their ballots for Trump.” Compared with past election results, however, it appears the outcome was more from a lack of Clinton enthusiasm than from Trump excitement.

Union or not, many blue-collar workers have clearly been attracted to Trump’s America-first rhetoric and believe Trump is negotiating good international “deals” for American workers.

One former toolmaker from Milwaukee, Roger, 67, lost his iron company job about a decade ago when it moved much of its sourcing overseas. (Roger asked not to use his last name out of fear of harassment.)

Heart attacks and other health problems have made it impossible for Roger to find work, so he spends time in his sprawling garden, growing pole beans and broccoli. But his confidence in Trump has made him feel like walking into one of the remaining tool shops and asking for work.

“Trump knows how to play the game—he got it from the streets of New York,” Roger says. “He’s the country’s best salesman. He gets up from his four-hour sleep and says, ‘What problem will I solve today?’”

While many of Trump’s claims can be easily debunked, fact-checking the economic landscape is more difficult: The economy is strong by certain metrics. In Milwaukee, Trump expounded upon his supposed economic miracle, telling the crowd that the United States now boasts “the greatest economy in our history.”

Unemployment in Wisconsin is at 3.3%, compared with 4.3% in January 2016. The stock market is hitting highs. Many in southeastern Wisconsin are hoping for a job boom from the massive, in-the-works Foxconn LCD panel plant. In Milwaukee, Trump also crowed that the military-style vehicle manufacturer Humvee is now making parts in Oshkosh, Wis.

But much of this economic recovery started during the Obama years. Humvee, for example, made its announcement about Wisconsin manufacturing in 2015.

A closer look at Wisconsin under Trump reveals a less rosy picture. The total number of jobs in Wisconsin has fallen over the past two years. The total number of Wisconsin manufacturing jobs declined in 2019. Wisconsin employers have been hurt by Trump’s trade wars—the all-American brand Harley-Davidson, for example, shifted its motorcycle production overseas and laid people off because of retaliatory tariffs in the EU, sparked by Trump. Trump’s tariffs on Chinese-made goods are arguably hurting Wisconsin companies.

And the big Foxconn deal (Trump lofted a golden shovel at the plant’s 2018 groundbreaking) is projected to create only 1,500 of the 13,000 promised jobs (but the company will still receive massive tax breaks from the state).

“It was a predictable disaster … [Trump] makes a big announcement and then doesn’t stick around to make it happen,” Kraig says. In general, “Trump is super-charging the economy, we’re on a sugar high with the tax breaks and pressuring the Fed not to raise interest rates even though they should. He’s extremely selective in the data points to measure what a strong economy is. The stock market doesn’t represent actual prosperity, and unemployment numbers miss all the people who are locked out of the economy and who have given up.”

Nationwide, according to census data released fall 2019, income inequality has ballooned under Trump, reaching its worst point since the Census Bureau started measuring five decades ago. Even with low unemployment numbers, the Economic Policy Institute reports that wage growth has been sluggish.

Regardless, Trump’s Milwaukee rallygoers feel flush about a bright future ahead. Trump’s frequent attacks on socialism will only make it harder for Democratic candidates to convince voters that more fairly sharing the country’s wealth will expand the prosperity they think they already have.

Writing for The New Yorker in June 2019, journalist Peter Slevin explored the complicated attitudes toward socialism in Milwaukee, a city that elected three socialist mayors in the 20th century. Slevin quotes historian John Gurda, noting that Wisconsin’s successful socialist leaders “were as creative as any capitalist, and as aggressive as any capitalist, in trying to create a system that worked for the common man and woman.” It seems Democrats would be wise to emphasize this approach as they campaign in a state known for valuing individuality, a bootstraps mentality and hard work.

But if Democrats are to change the minds of the attendees at Trump’s January rally, they have a long road ahead. “This is a blue-collar boom,” Trump said in Milwaukee, gaining more cheers as he railed against low-flow dishwashers and undocumented immigrant sex offenders while touting the economy.

Democrats will need to convince voters in Wisconsin and beyond that a true blue-collar movement recognizes how regulations protect workers and help fight pollution and climate change, how immigrants contribute to the economy, how wage growth fights income inequality, and the upside of many other things that Trump delights in opposing. Kraig, for one, says this moment is perfect for something like the Green New Deal, with long-term and centralized planning.

“You plan out what would make real shared prosperity, and move the needle on our immense income inequality,” he says. “The modern neoliberal market just won’t do that.”

Robert Kraig is an In These Times board member.