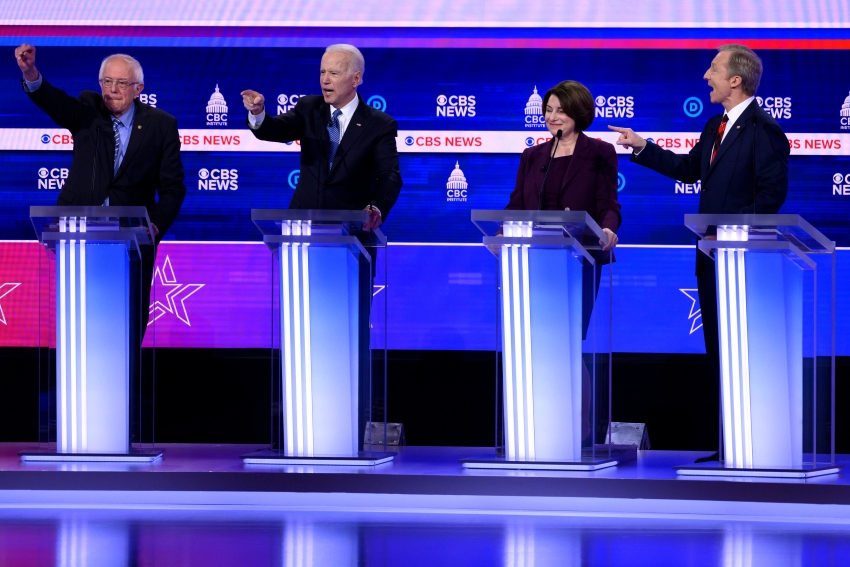 The 10th Democratic primary debate of the 2020 presidential campaign season co-hosted by CBS News and the Congressional Black Caucus Institute at the Gaillard Center in Charleston, South Carolina, on February 25, 2020. (Photo by JIM WATSON/AFP via Getty Images)

Moderators and candidates tried to weaponize democratic socialism to attack the front-runner.

And that’s what the Democratic establishment seems to be hoping for: to resuscitate the boogeyman of communism and red-baiting, and to use that to take down Sanders.

The conflict between frontrunner Sen. Bernie Sanders and the Democratic Party elite took center stage at the February 25 democratic debate in South Carolina, hosted by CBS News and the Congressional Black Caucus Institute. Every other candidate on stage had a key goal: to prove that Bernie Sanders is too divisive, too left-wing, and not savvy enough to unite the country against Donald Trump. They were abetted by moderators who came ready to fire one red-baiting question after the next.

The first debate question—“How will you convince voters that a Democratic socialist can do better than President Trump with the economy?”—shows just how out of touch the CBS moderators are with the average worker in this country. The official unemployment rate may be relatively low, but wages for workers are nearly stagnant, more than half a million people are homeless, and millions are uninsured or underinsured. Meanwhile, the fortunes of the super-rich are growing rapidly and dramatically, and each day we hear about the new hundred-million-dollar home Jeff Bezos bought, or the electric Porsche that Bill Gates is the new owner of. Yet the implication of this debate question is that this system is working, and that being a Democratic Socialist is a liability, something CBS has no evidence of—and that Sanders firmly rejected. “We're going to create an economy for all,” Sanders said in response, “not just wealthy campaign contributors.”

Throughout the night, many candidates tried as best they could to cart out and weaponize “democratic socialism” as an attack against the national front-runner. Sen. Amy Klobuchar repeated a position she’s expressed before. “I am the only one in the New Hampshire debate, when asked, if we had a problem with a socialist leading the ticket, that raised my hand,” she said. Tom Steyer said, “We are looking at a party that has decided that we're either going to support someone who is a democratic socialist or somebody who has a long history of being a Republican.” Yet polling shows some of Sanders’ programs are overwhelmingly popular: 70% of Americans support Medicare for All, according to an American Barometer survey from 2018.

Some of the candidates made remarks that were red-baiting by implication. Mayor Pete Buttigieg said, “I am not looking forward to a scenario where it comes down to Donald Trump, with his nostalgia for the social order of the 1950s, and Bernie Sanders with a nostalgia for the revolutionary politics of the 1960s.” The “revolutionary politics of the 1960s” that Buttigieg dismissed are what brought us the Civil Rights movement, which Sanders was an active participant in, having been arrested in 1963 protesting racial segregation in Chicago schools.

Perhaps the most stunning moment of the evening came from Face the Nation’s Margaret Brennan, who said, “You've praised the Chinese Communist Party for lifting more people out of extreme poverty than any other country. You also have a track record of expressing sympathy for socialist governments in Cuba and in Nicaragua. Can Americans trust that a democratic socialist president will not give authoritarians a free pass?” There was, of course, no question of what would be done to change the track record of sordid U.S. interventions abroad, including in Nicaragua where the U.S. armed and funded the Contras and their brutal campaign against the Sandinistas.

Bloomberg said, “Vladimir Putin thinks that Donald Trump should be president of the United States. And that's why Russia is helping you get elected, so you will lose to him.” Sanders was, once again, forced to explain his non-relationship to Vladimir Putin. The irony of this question posed by Bloomberg isn’t lost on working people, who have been bombarded by his overwhelming media presence thanks to the unprecedented amount of his personal fortune he’s spent buying his way into the election process. Yet, instead of focusing on Bloomberg’s unprecedented spending, it almost felt like there was a revival of the Cold War on stage.

And that’s what the Democratic establishment seems to be hoping for: to resuscitate the boogeyman of communism and red-baiting, and to use that to take down Sanders. But the truth is that Sanders’ program is wildly popular, and that Sanders has remained committed to it, even throughout the attacks he weathered on both the debate stage and throughout his campaign. His messaging has stayed consistent—he almost never wavers from it, even when it sets himself apart from the other candidates.

This is most clear on questions about foreign policy. From the debate stage, Sanders acknowledged the brutal history of U.S. interventions. “Excuse me,” he said, “occasionally it might be a good idea to be honest about American foreign policy, and that includes the fact that America has overthrown governments all over the world in Chile, in Guatemala, in Iran.” He also called Israeli Prime Minister Benjamin Netanyahu a “reactionary racist,” while acknowledging “you cannot ignore the suffering of the Palestinian people.” These are relatively remarkable admissions from any major party presidential candidate.

The only departure from the sustained attacks against Sanders throughout the night came from Elizabeth Warren, as she continued to focus relentless pressure on Michael Bloomberg—from his defense of the racist practice of redlining, to his use and refusal to blanketly release former women employees’ from non-disclosure agreements he had forced them to sign. The attention on Bloomberg took the heat off Sanders a little, but not much: He was still the main punching bag of the night.

Sen. Elizabeth Warren did, however, join in some of the criticisms of Sanders, agreeing that “progressive ideas are popular ideas,” but that only she would be effective at actually getting it done.

You’d think that Sanders was unpopular based on the studio audience’s response to him, which included moments of silence in response to his most popular campaign planks, and even occasional booing. That’s because tickets cost anywhere from $1,750 to $3,200, according to reports. Anyone with that kind of cash to spare on the televised train wreck we all watched is probably not one of the 40% of Americans with less than $400 in savings. After all, everything has a class character.

But red-baiting and the rich won’t stop Bernie. It should go without saying, and yet we have to keep repeating it because it’s consistently ignored or down-played: Bernie Sanders is the national front-runner in the Democratic Primary, and has won the first three states—something no other candidate has ever done before. He is poised to either win or come in a very close second in South Carolina, and is leading the polls in California and Texas. The candidates and moderators are out of touch with the vast majority of voters in this country, who agree that Sanders’ platform isn’t radical, but just and deserved. These voters are not only planning to vote for him in their primary elections, but are also donating, volunteering and organizing for him in record numbers. In spite of the attacks Sanders weathered on Tuesday night, there is no sign that the momentum and enthusiasm energizing his campaign and the grassroots movement around it is going anywhere but up.