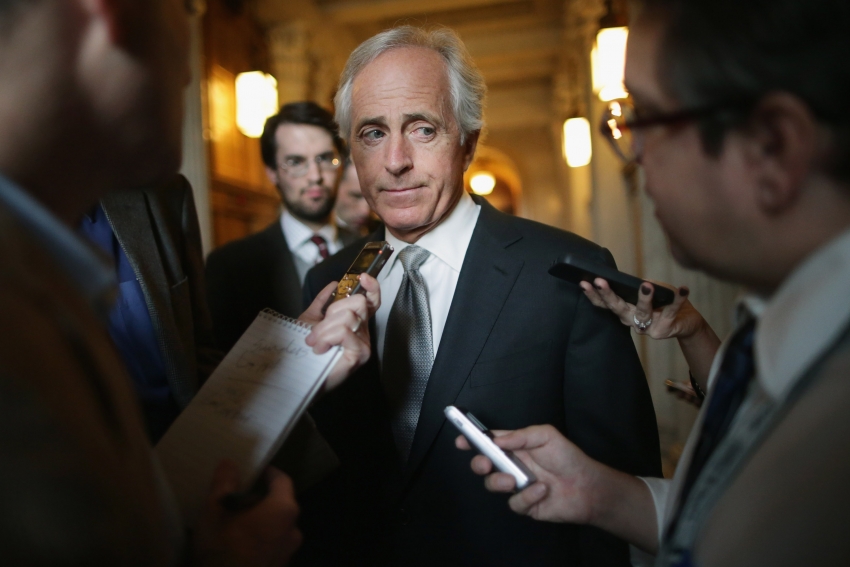 Suicides are not a natural disaster. They are not an inevitable consequence of the Dow plummeting.

The Trump administration and its allies on Wall Street and in Congress are increasingly calling for the United States to reopen the economy in the midst of a global pandemic. Sure, millions of people could contract coronavirus (the CDC predicts as many as 1.7 million Americans could die). But people also die from the economy shutting down, they say.

Here’s how Sen. Bob Corker (R-Tenn.) put it March 24 on Twitter: “I am glad the debate is now balanced and the understanding of the mid- to longer-term health consequences as a result of suicides, domestic violence, deprivation, and lives of poverty as a result of a prolonged lock down are being taken into account.”

This echoes the language that has been used by President Trump, who recently said he wants the country re-opened by Easter—a move that would certainly mean mass death. If the economy stays shut, Trump said on March 23, “You’re going to have suicides by the thousands.” He continued, “People get tremendous anxiety and depression, and you have suicides over things like this when you have terrible economies. You have death. Probably and—I mean, definitely—would be in far greater numbers than the numbers that we’re talking about with regard to the virus.”

Never mind that Trump is brazenly wrong about this claim—there is no evidence to suggest suicides would outnumber coronavirus deaths. This talking point allows the very politicians who would send workers into perilous conditions to posture as responsible public servants who just want to save lives. Such false branding is especially nefarious because these same politicians oppose the very social programs that are vitally needed to reduce such deaths of despair during a recession.

Studies show that strong social programs and spending help reduce the devastating lethality of an economic downturn. A study published in February in the journal Social Science & Medicine analyzed welfare state policies across all 50 states from 2000 to 2015. It found that higher participation in the Supplemental Nutrition Assistance Program, or SNAP, “is associated with lower overall and male suicide rates.” According to the study, increasing SNAP participation from 2000 to 2015 “could have saved the lives of approximately 31,600 people overall and 24,800 men.”

The 2008 recession offers key lessons about the vitality of social programs. A 2014 study published in the European Journal of Public Health looked at eight countries in Europe following the 2008 economic recession. It found that “the effect of unemployment on suicide is higher in countries with lower social spending.” This finding was consistent with another stark study of suicide patterns in Japan from 2001 to 2014 that looked at the impact of the 2008 recession, as well as other economic developments during that window of time. The researchers concluded, “Our analysis revealed that an increase of 1% in the per capita local government expenditures was associated with a decrease of 0.2% in the suicide rates among males and females aged between 40 and 64 and that this correlation was strengthened as the unemployment rate increased, particularly among males.”

These trends hold up over broad periods of time. In 2009, the Lancet published a study that looked the impacts of economic changes, particularly unemployment, from 1970 to 2007. The researchers found “no consistent evidence across the EU that all-cause mortality rates increased when unemployment rose, although populations varied substantially in how sensitive mortality was to economic crises, depending partly on differences in social protection.” The researchers did not mince their words: “Every U.S. $10 per person increased investment in active labour market programmes reduced the effect of unemployment on suicides by 0.038%.” But the lessons go back further. A National Bureau of Economic Research working paper from April 2005 finds that “the significant rise in relief spending during the New Deal contributed to reductions in infant mortality, suicide rates, and some other causes of death.”

Meanwhile, there is evidence that deaths of despair can be tied directly to austerity. A group of researchers published a 2015 article in BMJ Open journal based on a 30-year interrupted time-series analysis of suicides in Greece. The researchers found that “the passage of new austerity measures in June 2011 marked the beginning of significant, abrupt and sustained increases in total suicides.” Recession can, indeed, kill, but austerity measures worsen suicide deaths, the study indicates. “Suicides by men in Greece also underwent a significant, abrupt and sustained increase in October 2008 when the Greek recession began,” the researchers write, “and an abrupt but temporary increase in April 2012 following a public suicide committed in response to austerity conditions.” Meanwhile, suicides by women “also underwent an abrupt and sustained increase in May 2011 following austerity-related events,” the study found.

“Our analysis points to a significant increase in suicides following austerity-related events in Greece,” the researchers note. “As future austerity measures are considered, greater weight should be given to the unintended mental health consequences of these measures.”

Republicans’ preemptive crocodile tears for a possible rise in suicides among working people are belied by the fact that a key point of outrage for powerful Senate Republicans was the idea that temporary unemployment, for the lowest wage workers, could be slightly higher than what their minimum wage job paid them before. Outraged Republican Sens. Lindsey Graham (S.C.), Ben Sasse (Neb.), Tim Scott (S.C.) issued a joint statement and held a press conference with Sen. Rick Scott (R-Fla.) who lamented “the moment we go back to work, we cannot create an incentive for people to say, 'I don't need to go back to work because I can do better someplace else.'” Rallying Senate Republicans and calling a press conference to halt the injustice that a Taco Bell cashier may pocket a couple hundred more bucks for rent and baby formula is one of many tells that preventing deaths of despair is not the true motivation behind ending shelter-in-place orders.

Suicides are not a natural disaster. They are not an inevitable consequence of the Dow plummeting. They are tied directly to the failure of social safety nets, a tremendous problem here in the United States, where 40% of people don’t have enough money in the bank to weather an emergency and 27 million people don’t have healthcare. But if we collectively mustered the political will, we could create robust emergency social programs to keep the millions of people in free fall right now from crashing to the pavement. What kind of relief and mental solace could it bring people struggling with despair if they knew that, during this crisis, they would receive sizeable government checks every month, a moratorium on rent and water shutoffs, and free and universal single-payer healthcare? Providing these things is within our power.

But it is not within our power to keep people from dying if Trump gets his way and restaurants and bars reopen and schools re-start their classes come Easter. The worst-case scenarios are catastrophic. The CDC estimates 2.4 million to 21 million people could require hospitalization in the United States, but this country only has 925,000 hospital beds.

So when politicians say they want people to go back to work in order to prevent deaths of despair, it is important to be clear about exactly what they mean: They want to protect their friends on Wall Street, and their wealthy neighbors, and their own bottom lines. And they are willing to accomplish this by green-lighting mass deaths that it’s within their power to prevent.