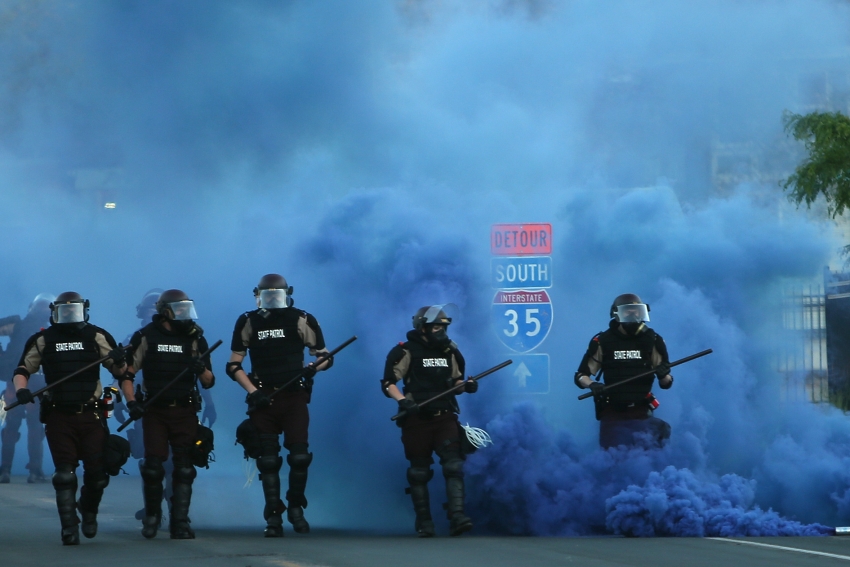 Police advance on demonstrators protesting the police killing of George Floyd on May 30, 2020 in Minneapolis, Minnesota. (Photo by Scott Olson/Getty Images)

The field of criminal justice is itself part of the problem.

Capitalism needs policing in order to protect the interests of wealthy white people and property, and to produce workers that can be exploited and free laborers.

Across the country, students and educators from elementary school through college are demanding that their campuses and schools reimagine forms of community safety by investing in its Black students and divesting from policing and punishment. In this moment of uprisings and calls for defunding the police and abolishing policing, we have witnessed the University of Minnesota commit to ending contracts with the Minneapolis Police Department, the Oakland Unified School District vote to disband its school police force, and the Denver school board vote unanimously to end its contract with the Denver Police Department. Students of all grade levels are pushing their schools to cut ties from municipal and campus police departments.

In response, I’ve heard many people propose that a way to end police violence is to give police officers more training by requiring that they get criminal justice degrees. Scholars in the criminal justice field have proclaimed this idea, as well as groups of people on social media. As someone with a bachelor’s degree in criminal justice, a master’s degree in criminology, and soon a PhD in criminology, I seriously disagree with this proposition. The foundation of the criminal justice field examines the connections between four pillars: “criminal activity,” policing/law enforcement, courts, and corrections or jails/prisons. Foundationally, this area of study does not examine how these four pillars are rooted in a history of indigenous genocide, settler-colonialism and chattel-slavery, and their expansion over time. In Are Prisons Obsolete?, Dr. Angela Davis notes that after slavery was abolished, states passed legislation revising the slave codes [Black codes] in order to criminalize free Black people. These four pillars helped establish today’s racial hierarchy that sustains white supremacy as the status quo through racist practices of colonizing and displacing indigenous peoples from their lands, criminalization, poverty, red-lining and anti-Black violence. And it is with this foundational history, and after years doing scholarship in this field, that I’ve concluded that the field itself is part of the problem.

Requiring that more police officers have degrees in criminal justice will not “solve” violence. Many police officers already have two-year, four-year and even graduate degrees. During the political uprisings of the late 1960s, the Kerner Commission was formed and a recommendation was made in 1970 that police officers have at least two-year college degrees. This specific turn towards professionalizing policing has led to over 50% of police officers now having at least a two-year degree, according to the National Police Foundation.

More importantly, a degree in criminal justice does not change the roles of police officers themselves, the function of policing, or policing as an institution. The purpose of policing is to protect property and maintain order and social control primarily by enacting violence on all people, and disproportionately on Black and non-Black people of color, people with disabilities, queer and trans people, women, migrants and immigrants, and young people.

Capitalism needs policing in order to protect the interests of wealthy white people and property, and to produce workers that can be exploited and free laborers. Incentivizing criminal justice degrees to students protects capitalism and establishes a relationship between police departments and campuses. Law enforcement recruiters act as liaisons (similar to how military recruiters function) with colleges and universities to establish official relationships to recruit the most vulnerable by making false promises, guaranteeing them a “good job,” benefits, a college fund, and health care—essentially, all of the resources that vulnerable communities should have access to without having to join the military or police. And in turn, many police budgets offer tuition reimbursement, and pay and position increases to police officers who have college degrees. Because of these promises, lack of livable wages, widespread job insecurity, and poverty, many poor and working-class, Black and Brown people enlist to become police officers. The union between incentivizing criminal justice degrees and joining the police force is a part of the portrait of the Black and Latinx officers who are highly “professional” that we continue to see more of. Yet, people continue to be harmed and killed by police because they work in service of an institution meant to safeguard white supremacy.

Some criminal justice professionals hold dual roles: teaching college students and colluding with local police on research projects and training opportunities. Students are taught to individualize institutional and systemic racism as “unconscious bias” or “implicit bias,” a framework that teaches them to view the killings of Black people as unintentional mistakes and not structural consequences of policing.

Sometimes a class on “ethics” or moral behavior is required for an undergraduate degree in criminal justice. But what does it truly mean to require an ethics course when the law allows police officers the discretion to act with impunity? If anything, police are the ones who get to determine what is “moral” and “ethical,” and what “ethics” looks like and means for them. They, in turn, get to influence and author the very literature used in these ethics courses.

Liberal police reforms, or moves to professionalize and expand police power, are also rooted in criminal justice studies. These approaches look like “women and queer people should get to shoot people too so let them be cops too!” These classes promote police recruitment under the pretense of “diversity” and “inclusivity” and are premised in the misappropriation of intersectionality. Liberal policing, or police with a nicer face, is a public relations campaign of police departments across the country to build their legitimacy. An example of this is police officers kneeling alongside protesters pretending to empathize with them, when in reality it is a de-escalation method used to calm protestors down to better enact violence on them.

Some may argue that we can reform these institutions, including criminal justice programs, by decoupling them from police departments, diversifying the literature, or including courses on harm reduction and anti-racist praxis. And, part of that teaching (I hope) would divert students away from careers in policing.

We need to do all of that work, too. But, that work is provisional and part of a project of reform. Again, it is the foundation of criminal justice studies that needs redressing. To replace it (if we should) we need an interdisciplinary field of something like Liberation Studies. The movement organization Critical Resistance defines abolition as “eliminating imprisonment, policing, and surveillance and creating lasting alternates to punishment and imprisonment.” Abolition is about building the things that we want, the things that to get to the roots of racial capitalism. Abolition allows us to see the foundation of criminal justice studies in full scope—and the foundation is rotted, racist and cannot be transformed. If we build up more criminal justice departments and degrees, we will continue to reinforce these disciplines as legitimate, and we will also produce more cops, which equals more of the same: more violence, more harm.

As someone with degrees in this area, I also recognize that I sit within many contradictions. I chose this degree path. And yet, because of my experience I have a better proposition to make: How about instead of asking for more criminal justice programs, we work to shrink and dismantle policing, the prison industrial complex, and racial capitalism?

Ash Stephens (he/him & they/them) is a PhD candidate in the Department of Criminology, Law and Justice at the University of Illinois at Chicago, with concentrations in Black Studies and Gender and Women’s Studies. He’s an abolitionist and has organized with collectives Love & Protect and Survived & Punished: NYC Chapter focused on supporting defense campaigns for criminalized survivors of violence. He’s also the Policy Coordinator at Transgender Law Center and has previously written for The Advocate and Truthout.