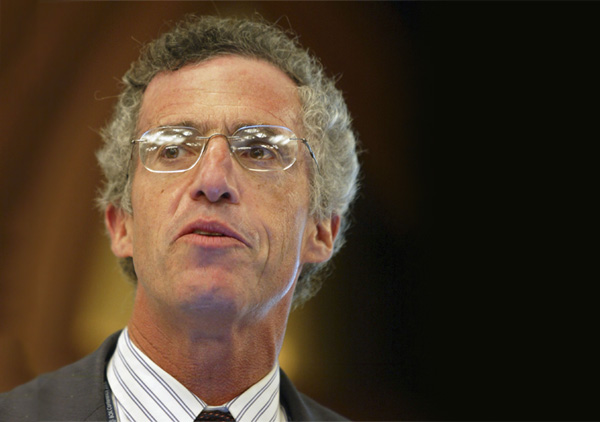 Frederic Mishkin, a professor at Columbia Business School and a former governor of the Federal Reserve Board, changed the name of a study he was paid to co-author from "Financial Stability in Iceland" to "Financial Instability in Iceland" on his CV, as depicted in Academy Award-winning documentary, Inside Job. (Photo by Chung Sung-Jun/Getty Images)

The Secret Life of Economists

Conflicts of interest throughout the Dismal Science are more common than you know.

Would Americans be more concerned about the financial deregulations that helped trigger the Great Recession if they knew that some of the economists publicly advocating for them profited from their implementation?

It’s tough to know, because in op-eds and media appearances, academic economists often do not disclose their investments in or positions at private financial institutions that could bias their policy recommendations. But after two researchers exposed a rash of potential conflicts of interest among members of their profession, economists are now for the first time considering ethics rules that would require them to divulge any connection between personal finances and the public policies they advocate.

Late last year, University of Massachusetts Amherst economists Gerald Epstein and Jessica Carrick-Hagenbarth published a paper titled “Financial Economists, Financial Interests and Dark Corners of the Meltdown.” They suggested a previously unexplored cause of the crisis: Economists didn’t see the collapse coming because many were profiting from the policies that led to disaster. “[E]conomists, like so many others, had perverse incentives not to recognize the crisis,” Epstein and Carrick-Hagenbarth wrote in the paper, which was published by their university’s left-leaning Political Economy Research Institute.

The study examined 19 unnamed academic financial economists whose opinions have been prominent in the media during the push for financial reforms before and after the market crashed. Thirteen of the academics had a stake in or held positions within financial institutions whose investments could have jumped in value if and when the economists’ suggestions became policy. Eight of those 13 did not report such conflicts of interest.

Epstein says economists’ silence about the dangers of deregulation can be partially attributed to those academics’ economic interests. “If you are a financial economist and can make thousands of dollars consulting for a financial firm, and they might be less likely to hire you if you come out publicly for financial reform, you might think twice about promoting such reform.”

In 2006, Frederic Mishkin, a professor at Columbia Business School and a former governor of the Federal Reserve Board, was paid $124,000 by the Icelandic Chamber of Commerce to coauthor a study about Iceland’s finances, in which he explained away many of the factors that would soon implode the country’s economy. The 2010 Academy Award-winning documentary Inside Job tells how Mishkin changed the name of the study from “Financial Stability in Iceland” to “Financial Instability in Iceland” on his curriculum vitae.

The American Economics Association (AEA), the professional organization of academic economists, has no ethics rule prohibiting or requiring disclosure of such conflicts of interest, beyond some disclosure requirements for papers submitted to the organization’s journal. In fact, the body currently has no official ethics code at all.

Epstein and Carrick-Hagenbarth circulated a letter in January, signed by almost 300 economists, calling for the creation of such a code. “We believe this would be an important and necessary step toward enhancing the credibility and integrity of the profession,” they wrote in the letter.

It appears to have had some effect. At its January conference in Denver, the AEA announced the creation of a committee to develop ethics rules. (Ironically, the identities of the committee’s members have been kept secret, although Epstein says the body is planning to release their names in the near future.) AEA representatives declined to comment on the committee’s progress.

Other social science disciplines, like sociology, do have ethics provisions that require full disclosure of potential conflicts of interests in public speeches, articles and academic publications. Of course, Epstein knows an ethics code for economists won’t repair the country’s economy. But he claims it is a step toward more moral financial policies. “A code of ethics is no panacea,” he says. “But it can help create an environment where economics and economists can be held more accountable.”