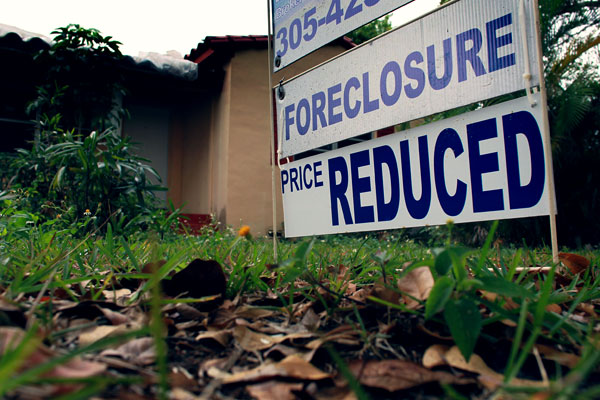 Another foreclosed home in Miami. (Photo by Joe Raedle/Getty Images)

Months after the ‘robo-signing’ scandal, states are negotiating with banks—and activists are keeping the pressure on.

Two thousand and eleven is destined to become the Year of Foreclosures. The recession officially ended in June 2009, but the housing market’s implosion continues: Banks set a record by seizing more than 1 million homes in 2010, according to RealtyTrac Inc., and housing experts agree that foreclosures will soar higher this year.

Bank seizures would have been even more numerous last year if not for the “robo-signing” scandal that revealed widespread fraud and caused the country’s biggest banks to halt foreclosure proceedings in the fall. Loan servicers’ illegal habit of rapidly signing off on huge numbers of faulty mortgage documents also inspired something unprecedented: Attorneys general from all 50 states began investigating a system that had wrongfully pushed thousands of families out of their homes.

When Iowa Attorney General Tom Miller, who is leading the nationwide investigation, said in December that “we will put people in jail,” foreclosure fraud victims cheered. The chance to reform the U.S. mortgage market and punish perpetrators finally seemed at hand, as state attorneys general lost patience with a federal government seemingly content with voluntary measures to monitor servicer practices.

But no charges had been filed as of March 30, when the attorneys general leading the effort began face-to-face negotiations with Bank of America, JP Morgan Chase, Citibank, Wells Fargo and Ally Financial (formerly GMAC) at the Justice Department in Washington, D.C. A few weeks earlier, a proposed deal with the banks–with no financial settlement or threats of criminal charges mentioned–was leaked, and many housing activists cried foul.

“This is the biggest opportunity [since the crash] to really change the mortgage service system, which is continuing to prolong the economic woes in our states,” says Jordan Estevao, director of National People’s Action’s (NPA) banking accountability campaign. The proposed settlement is “good but not enough. It doesn’t go far enough to mandate principal reductions for millions of homeowners. And it needs specific enforcement measures. If the enforcement isn’t there, the settlement can say anything, but the banks won’t comply.”

Fearful of a middle-of-the-road deal–the attorneys general reportedly didn’t interview any witnesses or subpoena any documents before meeting with the banks–community-based groups like NPA, Jobs with Justice and PICO National Network have kept up the pressure on Miller and other officials. They see the investigation as an opportunity for both punishment and structural changes to avoid millions of additional foreclosures that benefit no one except banks, which often charge hefty foreclosure fees, and lucky investors, who snap up homes at rock-bottom prices. (By 2012, Californian local governments alone will have spent $17.4 billion on foreclosure-related costs, according to PICO’s March report, “Home Wreckers: How Wall Street Foreclosures Are Devastating Communities.”) The groups have held street protests and organized nationwide “call-ins” to AG offices to demand criminal charges and systemic change.

Geoff Greenwood, spokesperson for Miller’s office, notes that the attorney general has met with community activists several times since late last year. “Our central goal is to make a dysfunctional system functional. …On behalf of consumers and the interests of the housing market, it’s best to move as quickly as possible to lift this cloud,” Greenwood says.

Although everyone wants stability in the housing market, a speedy settlement endorsed by all 50 attorneys general looks farfetched. The Justice Department, the U.S. Housing and Urban Development Department and the Treasury Department have all endorsed the leaked deal, but in late March four Republican attorneys general objected to it, saying that the outlined mortgage principal reductions may foster a “moral hazard” by rewarding homeowners who didn’t keep up with payments.

John Taylor, president and CEO of the National Community Reinvestment Coalition, a fair lending advocate that helps homeowners avoid foreclosure, believes there’s a more important moral hazard to worry about. “What the AGs shouldn’t do is agree to any removal of [criminal] liability. You don’t want a situation where banks practice malfeasant lending and get caught, but are only given a slap on the wrist.”