At the Bullfrog, Those Left Behind by the Global Economy Find Relief—and a Place to Talk Trump

In a Jamestown, N.Y., hotel and bar, down-and-out former factory workers seek solidarity and camaraderie—often expressed in shared rants about immigrants or liberals.

I went to the Bullfrog looking for Dan and Rhonda.

Or rather, looking for their pasts. I knew Dan was living on the streets of downtown Chicago and Rhonda had died the previous summer from an infection related to her heroin addiction. I was reporting on their lives as part of a larger project on heroin and homelessness.

Dan and Rhonda had met at the Bullfrog Hotel and Bar in their hometown of Jamestown, N.Y., when Dan was living in the cut-rate rooms above the bar. He described it as a seedy and raucous place.

When I walked into the Bullfrog on Valentine’s Day, the first thing that caught my eye was a grinning, larger-than-life print of Donald Trump’s face. It was positioned right behind a ceramic bullfrog with a huge, erect penis.

At first I assumed the portrait of Trump was a protest sign. But soon I learned that Trump is the Bullfrog’s patron saint. Nearly all the Bullfrog regulars are Trump true believers, and the hotel is owned by an ardent Trump backer, Teddy Langworthy, Jr. Teddy’s son, Nick Langworthy, runs the Republican committee for nearby Erie County, N.Y., and served on Trump’s transition team. 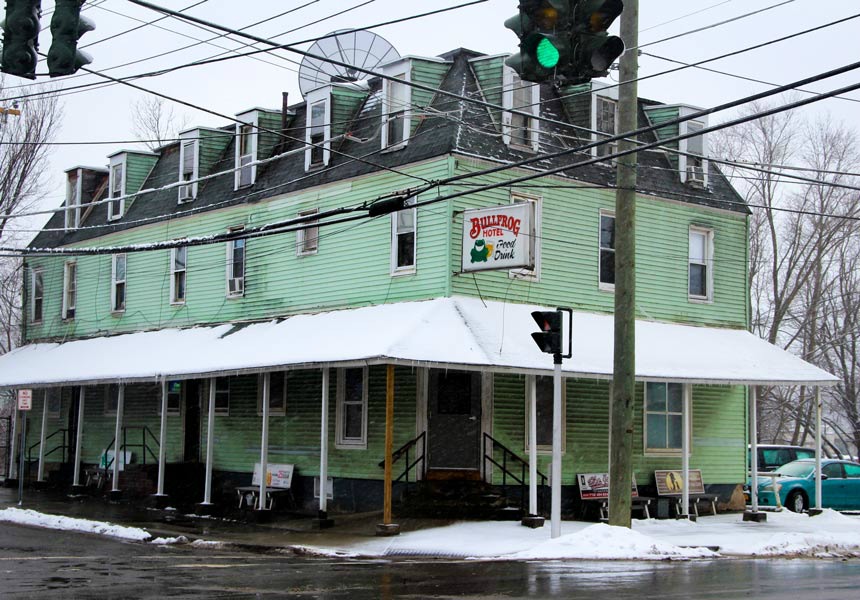 During three 2017 trips to James-town, I learned about Rhonda and Dan’s former lives. And I learned a lot more about Jamestown, a struggling town like so many others across the Rust Belt, hard-hit by deindustrialization and unemployment and fallen prey to the opioid epidemic.

Jamestown is 88 percent white, and 29 percent of its residents live below the poverty line, more than twice the national average. Many of the patrons and residents I met at the Bullfrog are scared, frustrated and angry at how the global economy has left them behind. As unions were busted and jobs shipped to other countries or nonunion Southern states, they were laid off or had their wages slashed. Some became addicted to alcohol and drugs. Many struggle to survive on meager monthly checks from government programs for disability, Social Security, workers’ compensation or unemployment.

Most have been coming to the Bullfrog for a long time. For many, it’s been a rock in a sea of instability.

Teddy Langworthy’s father, Theodore, bought the Bullfrog in 1979. Both men also worked for decades at the nearby Blackstone factory, which made automotive radiators and other products. Now renamed TitanX and owned by the multinational Tata Group, the factory has laid off a large portion of its workforce — including some Bullfrog patrons — over the years, including when it opened a plant outside Monterrey, Mexico, in 2015.

In its heyday, Jamestown was known as the furniture capital of the country. Throughout most of the 20th century, it was a thriving city, its streets lined with department stores, bakeries, butcher shops and ice cream parlors, its bars packed with factory workers. The Bullfrog, which sits on the swift Chadakoin River, once served as a stagecoach stop and way station for visiting merchants. Today, it’s a short walk from the brick buildings, many now empty, that once housed furniture factories, yarn mills and other industrial shops.

As he tends bar, Teddy rails against liberals, sanctuary cities and the welfare state. He and his family have worked hard all their lives — ​“my father never took a vacation,” he says. Now, as Teddy sees it, undeserving people are getting their food, housing and medical care paid for by the government. When his mother was in a nursing home, his father drained their savings to pay for her care, while the woman in the next bed was on public assistance and got the same treatment for free, he says. He also bitterly recounts the story of a local man who got a free ambulance ride to the dentist for a toothache.

Many of the Bullfrog patrons and tenants share Teddy’s views. They are especially upset at the growing numbers of Puerto Ricans living in Jamestown, who (they believe) are moving into subsidized housing and collecting other public benefits.

“The mayor wants to take everyone from New York City and make this a welfare state,” says Rita Swanson, 52, who has a room at the Bullfrog and spends much of her time at the bar. She worked for 16 years at a nearby factory that makes truck lights. But when the company laid off workers and, she recalls, invited her to reapply for her job at $8 an hour instead of $15, she said no thanks. ​“I loved my job. … Now I just do this,” she says, gesturing at her drink. I couldn’t help but be struck by the irony of the antipathy toward people on public assistance despite the fact that many of the Bullfrog’s tenants and patrons are themselves surviving on disability and other social welfare programs. ​“You should see this place on the first of the month,” says one patron, referring to the day government checks come in.

Those checks don’t provide for a very comfortable life. The hallways and shared bathrooms above the bar can only be described as filthy, suffocating and sad. Tenants do their best to make homes out of the cramped, stuffy rooms.

I was initially disturbed that Teddy was charging desperate people money to live in such conditions. But as with much single-room-occupancy housing, the hotel is actually a crucial last-ditch option for people who might otherwise be out on the street.

And while Teddy told me repeatedly how much he detests people who live off the government, I soon realized that he and his niece and nephew, who also tend bar, genuinely care about their customers, including those who depend on the country’s frayed safety net.

Ed Gustafson has lived at the Bullfrog on and off for almost 40 years, after a childhood bouncing between foster homes. Teddy pays him to answer the phone and do odd jobs. One evening, Gustafson is in a bad mood. He yells at Teddy and scrapes his hand along the bar, saying, ​“If I had claws!” with the most menacing attitude his small frame and wide blue eyes can muster. Teddy smiles kindly and calms him down.

“I remember when Ed would sell pork pies for one cent each,” he says. ​“It was three cents!” Gustafson corrects him.

Bill, 40, is also not having a good day. He is worried about an upcoming surgery for a serious back injury he suffered in 2014 in a fall at his job installing retail displays. After a previous surgery, Bill was prescribed Oxycontin and Per-cocet — opioid painkillers. He realized he was addicted when he missed a dose and went into convulsions at a birthday party for his girlfriend’s daughter.

“You could get addicted in a heartbeat,” says Bill, who declined to give his last name because he’s pursuing a lawsuit over the accident. He managed to stop taking opioids after a painful withdrawal. But he’s worried what will happen after the next surgery.

Two pain clinics not far from the Bullfrog dispense the same prescription painkillers that started the national opioid crisis, which has especially ravaged Rust Belt towns like Jamestown. As in Bill’s case, opioid addiction often starts with a workplace injury. In an industrial or post-industrial area like Jamestown, such injuries are common. A 2013 state assessment of Chautauqua County, which contains Jamestown, found there were 397 work-related hospitalizations for every 100,000 employed people between 2009 and 2011, compared to 172 for the state as a whole.

Interestingly, opioid addiction also has been statistically correlated with voting for Trump, even when other factors like race and poverty are controlled. As in countless other towns, the proliferation of prescription opioids has sparked a heroin epidemic. In 2012, Jamestown police seized 119 bags of heroin, which amounts to a little less than half an ounce. In 2014, they seized a total of 18 ounces, and in 2015, they seized 31.6 ounces.

Dan and Rhonda actually didn’t start doing heroin until they got to Chicago, but they used other drugs and drank heavily while hanging out at the Bullfrog. Though Rhonda didn’t officially live there, tenants would sometimes care for her and let her stay in their rooms when she was in bad shape.

Patrons at the Bullfrog were not surprised to hear that Rhonda had died from a heroin-related infection; they’ve lost multiple friends and family members to the drug.

Research has been inconclusive on whether opioids are helpful in managing long-term chronic pain — like the kind caused by workplace injuries or just a lifetime of hard physical labor. One recent study found they were ineffective. Meanwhile, heroin and other drugs will not really soothe the emotional pain of seeing opportunities dissipate, dreams falter, jobs leave, boredom set in. Alcohol can, of course, dull pain, calm anxiety and make one feel cheerful and empowered, while the buzz lasts.

But clearly something about the Bullfrog, like countless such bars in other hardscrabble towns, offers a balm beyond the alcohol: a feeling of solidarity and camaraderie — often expressed in shared rants about immigrants or liberals — that people can depend on even when everything else is uncertain.

“Jamestown used to be the greatest place; it was booming,” says Al, 55, whose grandfather and father both worked at Blackstone until retirement. Al was laid off by Blackstone in 1991 and hasn’t found a job as good since. ​“Back then, there were so many bars. With the loss of work, the bars closed too — the loss of big business means the loss of small business. But we’ve still got this. We still have the Bullfrog.”

Kari Lydersen is a Chicago-based reporter, author and journalism instructor, leading the Social Justice &amp; Investigative specialization in the graduate program at Northwestern University. She is the author of Mayor 1%: Rahm Emanuel and the Rise of Chicago’s 99%.
Have thoughts or reactions to this or any other piece that you'd like to share? Send us a note with the Letter to the Editor form.
More articles by Kari Lydersen
FeatureLabor
In the Coal Mines, Workers Are Dying to Make a Living
Mining companies increasingly rely on cheaper contractors who face longer hours and higher risk of accidents.
Labor
Over Mayor Lightfoot’s Objections, Chicago Is Set to Finally Enact an Elected School Board
Despite some qualms with the legislation, public education advocates are cheering the embrace of school democracy over mayoral control.
Labor
Warehouse Workers Are on the Front Lines of the Covid Crisis. They're Worried They'll Be Passed Over for the Vaccine.
Low-wage warehouse workers, many of whom are temporary, are demanding access to the vaccine.
Similar articles
Culture
Christopher Hitchens’ Latest, Posthumous Essay Collection Stings Without a Point
Somewhere along the way, Hitchens lost a purpose for his contrarianism.
Mark Dunbar
Culture
Why the Youngest Country on Earth Can’t Escape the Yoke of Colonialism
'We Come as Friends' captures the Western exploitation of South Sudan from the moment of its conception
Michael Atkinson
Culture
Labour Pains
There’s a U.K. General Election in May and I don’t know how to vote.
Jane Miller
Join our newsletter
Fearless journalism, emailed straight to you.
Subscribe and Save 66%