The endless miles of dead brown fields are finally gone.

Spring in the Midwest should be announced by endless miles of green, but at best, a haphazard patchwork of winter wheat, rye, hayfields and the occasional bit of pasture are the only green that show up after snow-melt.

Most of the winter grains planted last fall have been sprayed and killed to make way for endless miles of corn and soybeans. (We use cover crops to protect the soil in organic production too, but they are not sprayed in the spring, rather incorporated into the soil to increase organic matter and fertility.)

Corn, soy and alfalfa cover the Midwest, a monoculture of genetically engineered (GE) crops that have displaced the small dairy farms and their pastures, the fields of small grain and diverse mixes of clover and grass hay.

We are at least, partially, through the herbicide season. The first wave was last fall’s ​“burn-down”, the non-selective spray application (most notably the glyphosophate herbicide Roundup®) that kills everything and gives the fields that lovely dead brown look in the spring.

The spring ​“pre-emergence” spray (killing weeds before the corn and soy emerge) is over and the third wave of ​“post-emergence” spraying is in progress and of course the forth and even fifth spray applications can come anytime during the summer to hopefully kill any weeds that escaped the first three attempts.

Then of course, wheat will need the pre-harvest application of, again, Roundup®, to kill any surviving perennials, but mostly to enhance the dry down (or ripening) of the grain. This is done a few days prior to harvest, and while it is quite effective as a desiccant, it also puts a good amount of herbicide directly on grain that will move into our food chain.

So, if nothing else GE crops have clearly changed the appearance of our landscape, the crops farmers grow and the way they manage weeds and pests. But they have changed the economy as well. The small diversified farms, the cheese factories and the small town businesses are mostly gone.

“Small towns, people and the environment have become secondary to the growth of modern agriculture.”

Some would argue, mostly agricultural economists, corporate agribusiness executives and those farmers who decided to get big rather than get out, that ​“modern” agriculture is the economic engine that drives rural America.

And it does, but those of us who still farm on a relatively small scale, those who value the environment, who try and keep our rural schools running, our rural roads passable our hospitals open, to us, it appears modern agriculture has mostly driven the money out of rural America.

Industrialized agriculture still needs people to do the work, but that work must be done at very low wages. When the profit is gone, when small farms are gone, when farm inputs are no longer purchased locally, when the tax base erodes — rural communities die.

The profit seems to have instead, gone into the pockets of seed, chemical and equipment companies, Wall Street banks and through the hands of corporate lobbyists into the hands of elected officials who will, at all costs, support corporate profit and the wishes of agribusiness. Small towns, people and the environment have become secondary to the growth of modern agriculture.

Just as blue collar workers have seen their jobs and financial stability outsourced, so we have seen the wealth of our rural communities, the local farm income that had once been recirculated in our small towns, sent into the profit margins of corporate agribusiness.

So, do I blame this on GE crops? No, not directly, but the system of farming, the large scale monoculture grain and livestock production for the world market could not exist without them.

Before the introduction of GE soy in 1996, the trend to larger and fewer farms was clearly happening, but the GE ​“promise” of effective weed control and higher yields certainly hastened that trend. But that ​“promise” was just that, a promise — one that was false and quickly broken.

The National Academy of Science in a recent report seemed to find no clear evidence supporting the grand promise of GE crops. They worked in some instances, but failed in others. There was some indication of increased yield but weeds were developing herbicide resistance as well. In short, hardly a ringing endorsement. And, GE crops actually increased herbicide usage, not a positive change for our health, or the environment.

Despite the high cost and progressive failure of the GE technology, farmers continue (out of desperation to make a profit?) to embrace it and cover the Midwest with GE corn and soy. More grain used to fatten livestock (despite the demand for grass fed dairy and meat) and to further the expansion of dairy, hog and poultry production into giant Concentrated Animal Feeding Operations (CAFO’s).

The integral part GE crops have played in the growth of industrial agriculture, the global food economy, obscene corporate profits and the decline of rural communities will be their real legacy.

And don’t be surprised, as American consumers increasingly reject GE technology, corporate agribusiness, with the support of our government, will force GE crops on the rest of the world. That, it seems, is one more aspect of American Exceptionalism. 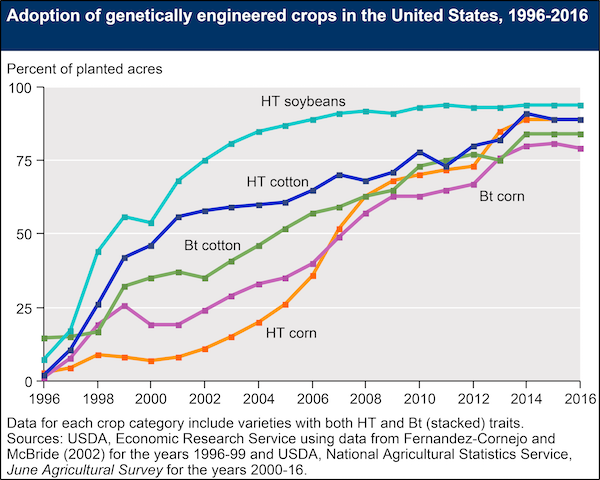 Have thoughts or reactions to this or any other piece that you'd like to share? Send us a note with the Letter to the Editor form.
More articles by Jim Goodman
ViewpointRural America
The Food Crisis Didn’t Begin with the War in Ukraine
Even as the failures of industrial agriculture become obvious, U.S. agribusiness aims to force it on the rest of the world.
Rural America
Our Food System Is Broken and Biden’s USDA Pick Won’t Fix It
Tom Vilsack showed his pro-corporate colors when he served as Obama's ag secretary. To build a just food system under his leadership, we will have to push from below.
ViewpointRural AmericaThe Wisconsin Idea
How Decades of Corporate-Friendly Farm Policies Wrecked Rural America
A Wisconsin dairy farmer explains what Democrats need to do to rebuild rural communities and regain the ground they’ve lost.
Similar articles
Rural America
How FDA Deception Promotes Genetically Engineered Food
Steven M. Druker
Rural America
Voters in Oregon Defeat Nestlé’s Attempt to Privatize Their Water
Alexis Bonogofsky, Truthout
Rural America
Global Financial Fears, Community Resilience, the New Economy, Just Transition and Gig Workers
John Collins
Join our newsletter
Fearless journalism, emailed straight to you.
Subscribe and Save 66%