Toward a Real-Life Zootopia

How a fuller conception of freedom can help humans and others coexist. 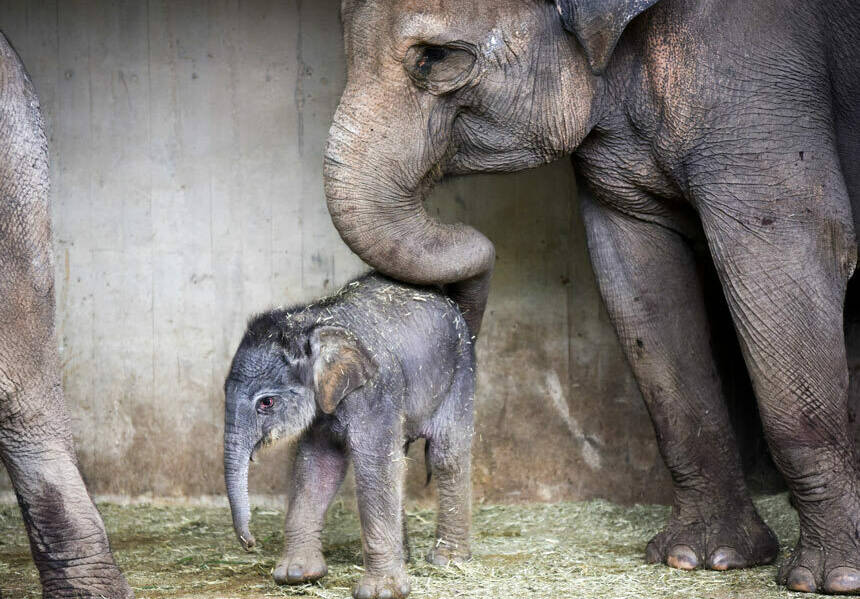 A newborn Sumatran elephant is pictured with her mother Nova at Madrid Zoo. (Jorge Sanz/Pacific Press/Lightrocket via Getty Images)

It’s not easy being a wild ele­phant. Your habi­tat is shrink­ing, cli­mate change is turn­ing your home into a desert and you might get shot for your tusks. Despite all that, you fare much bet­ter than you would in cap­tiv­i­ty. You typ­i­cal­ly roam at least 1,500 square kilo­me­ters — mil­lions of times more space than the Asso­ci­a­tion of Zoos and Aquar­i­ums require­ment of 0.0005 square kilo­me­ters, or around a tenth of an acre. In part thanks to their tiny enclo­sures, almost two-thirds of cap­tive ele­phants devel­op ​“stereo­typ­ies,” unusu­al repeat­ed behav­iors linked to psy­cho­log­i­cal distress.

Animal agency has long been a stumbling block for some on the Left. Marxist biologist (and animal experimenter) Steven Rose once wrote that he was “proud to be a speciesist.”

In 2005, Detroit Zoo became the first U.S. zoo to retire its elephants on purely ethical grounds, sending them to a sanctuary where they’d have moderately more room—dozens of acres. The zoo then spent millions of dollars developing an exhibit of creatures who could manage just fine in a small space: snails.

In The Animals’ Agenda: Freedom, Compassion and Coexistence in the Human Age, ecologist Marc Bekoff and ethicist Jessica Pierce argue that animals need and deserve the liberty of wildness rather than the superficial protections of captivity. This slim but forceful volume maintains that partial freedoms like “freedom from hunger” or “freedom to spread one’s wings” don’t add up to humane treatment. Instead, any program to improve the lives of animals must be centered, simply, on freedom. Their argument—intentionally or not—also offers some welcome insight into the politics of human flourishing.

The primary target of their critique, somewhat paradoxically, is less the zoos, research facilities and farms that keep animals confined than the field of animal welfare science itself—the reams of studies on improving nonhuman treatment within the context of captivity. Research into, say, what size cages chickens prefer, is often done in cooperation with industry. Bekoff and Pierce argue that such studies assume and enable the logic of the cage.

Zoos may seem less inherently violent than the meat industry or animal testing. But the conception that zoo animals “have a cushy life because we give them everything they need is both dangerous and wrong,” Bekoff and Pierce write.

Animals, it turns out, get bored. “There is ample evidence … that animals want challenges, they want to work,” the authors assert. Rats, for example, will eat more if access to food involves a stimulating task such as foraging than if it doesn’t. “Why?” Bekoff and Pierce ask. “Because they are motivated to perform the task itself, and aren’t just satisfying hunger.”

In other words, animals are complex creatures with distinct wants and needs. There is no way to know and plan for exactly what a given individual wants (as many a frustrated utopian has learned about humans). And, as Bekoff and Pierce observe, animals seem to take inherent pleasure in exercising their autonomy.

Their analysis sounds not so different from other democratic critiques of technocratic social engineering: Animal welfare science offers a discrete number of highly managed and unsatisfying options, only allowing improvement that doesn’t threaten business-as-usual. The scientists themselves are ideologically embedded in—and materially dependent on—an exploitative system.

As an alternative, Bekoff and Pierce propose a new science of animal well-being. Rather than seeking to ameliorate the worst abuses, this new inquiry would set out to discover where and how—in a world where human food production, extractive industries and carbon dioxide emissions have taken over every corner of the globe—animals can actually thrive on their own terms.

The authors see this approach in action in the Detroit Zoo’s decision to retire its elephants, or in the National Park Service’s temporary drone ban, supported by research showing that bears experience a drastic heart rate increase when drones fly by. They also see it in dog-walkers who let the canines themselves dictate the route—a self-directed pooch spends as much as a third of her time stopping to sniff.

All of this is rooted in cognitive and behavioral evidence, although the book’s major missed opportunity is that it does not delve much into this evidence other than asserting it exists. As such, it is not the best introduction to animal ethics, nor to animal behavior.

Where the book stands out, however, is in highlighting the moral import of recognizing animal agency.

This agency has long been a stumbling block for some on the Left. Marxist biologist (and animal experimenter) Steven Rose once wrote that he was “proud to be a speciesist,” because “human struggles [unlike nonhuman] are those in which the oppressed themselves rise up to demand justice and equality, to insist that they are not the objects but the subjects of history.”

A 2015 Jacobin article cited Rose approvingly: “Animals … are objects of history.To compare them with humans … is factually wrong.” In 2016’s Four Futures: Life After Capitalism, socialist Peter Frase takes this approach even further: “In the end, nature”—a category in which he includes nonhuman animals—“has neither interests nor desires; it simply exists.”

Taken to its logical conclusions, such a stance has profoundly ageist and ableist implications: You don’t count morally unless you can organize an uprising? But even setting those aside, it ignores the myriad ways in which non-humans do assert themselves and act as subjects within their own lives, from a captive chimpanzee gathering rocks to throw at zoo-goers to a cow leaping a fence to escape the slaughterhouse.

This agency extends to altruistic behavior. Bekoff and Pierce recount an experiment in which one rat is placed in a tank of water, and another rat is given the option of helping the first rat escape or receiving a tasty chocolate. Most rats opt for the former, suggesting some capacity for empathy or even moral action.

Such examples, the book implies, should make us think twice before collectively choosing the chocolate. The authors call for a fundamental transformation of our interaction with both domesticated and wild animals. They put forth a new paradigm favoring maximum autonomy, but lack a vision of how to bring it about, what exactly it looks like and how to handle the corporate interests standing in the way— in short, they need the Left.

The Left, however, also needs them. Industrial meat production, to pick the most obvious example, has proven disastrous for the environment and public health, and destroying wildlife threatens humanity’s long-term survival.

The freedom Bekoff and Pierce call for is essential for the well-being of human animals, too. The book reminds us that the desire to have control over our own lives—the democratic spirit—is not just a means to tame class society but an end in itself, a shared yearning that arose not because we are special, but because we are not.

Day­ton Mar­tin­dale is a free­lance writer and for­mer asso­ciate edi­tor at In These Times. His work has also appeared in Boston Review, Earth Island Jour­nal, Har­bin­ger and The Next Sys­tem Project. Fol­low him on Twit­ter: @DaytonRMartind.

Have thoughts or reactions to this or any other piece that you'd like to share? Send us a note with the Letter to the Editor form.
More articles by Dayton Martindale
Feature
10 Ways Remote Learning Is Failing Our Students
Returning to in-person learning poses many risks. So does staying at home.
Feature
11 Statistics That Show Racism Is Entrenched in Our Healthcare System
Covid-19 is disproportionately harming Black Americans. This is not an exception, but the rule.
Feature
9 Statistics That Show What a Miserable Failure the CARES Act Is
Major bailouts went to big corporations, giving them lasting security, while the rest of us got a temporary Band-Aid.
Similar articles
Culture
Giuliani: Hero or Race Baiter?
Steven Wishnia
Culture
Wildes Second Coming Out
Doug Ireland
Culture
Radical Changes
Guillermo Gómez-Peña
Subscribe to our free newsletter
Fearless journalism that speaks truth to power
Limited Time: