Trumpism is nothing new to the people of Phoenix. Sheriff Joe Arpaio, of Maricopa County, has been a real-life preview of what Donald Trump would mean for communities of color.

People in Maricopa don’t have the luxury of being cynical about the presidential election. Trumpism is not something people here have to imagine; it is something they and their parents have lived through.

During his 23-year stint as sheriff, Arpaio has deputized his department as an extension of federal immigration authorities: leading raids in heavily Latino neighborhoods, engaging in well-documented racial profiling of Latinos, and brutalizing the people in his charge. Arpaio also proudly has a tank with his name painted across the side parked outside the county jail. 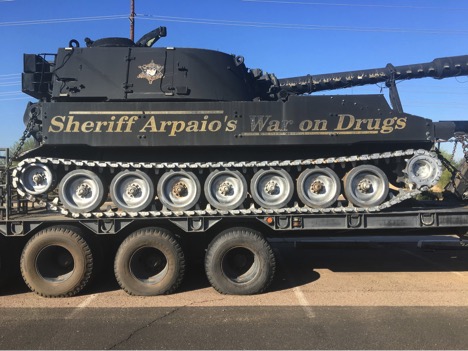 Arpaio is up for reelection, and national coverage of the race has focused on the sheriff’s self-inflicted legal troubles. What’s missing from that story is the organizing that has taken off throughout Maricopa County over the last seven years — including the immigrant-rights-based voter registration drive that has county officials predicting record turnout.

Arizona made national news in 2010 with the passage of SB 1070, one of the harshest anti-immigrant laws in the country, which was embraced by Arpaio. Since then, countless Latinos, many of them younger, have joined or built community organizations to move from a place of fear to one of power.

On Friday, Ai-jen Poo and I visited Phoenix as part of a six-state, six-day #BestofUS2016 tour to bring voice to the unsung heroes and heroines of this election. Alejandra Gomez, the co-director of Living United for Change in Arizona (LUCHA), a grassroots membership organization, is one of those heroines.

She is now one the leaders of a countywide shift from community defense toward advancing a proactive agenda.

Carlos Garcia, executive director of Puente, a grassroots migrant-justice organization, has been going head to head with the sheriff for nearly a decade. As Garcia said in a Democracy Now interview in October, “[Arpaio] obtained the 287(g) agreement and decided to go after our communities in a way that was never seen before — what he called crime suppression sweeps. He flooded immigrant neighborhoods with his deputized posse members, plus his sheriff deputies, and would pull over and detain anyone that looked undocumented.”

In the beginning, organizers focused on pressuring officials on moral grounds, but that had little effect.

“Soon we found that, for them, morality was outside the conversation,” she said. ​“We quickly identified that we needed to build power, and that we actually already had power. And that was our ability to share our stories and register people to vote.” 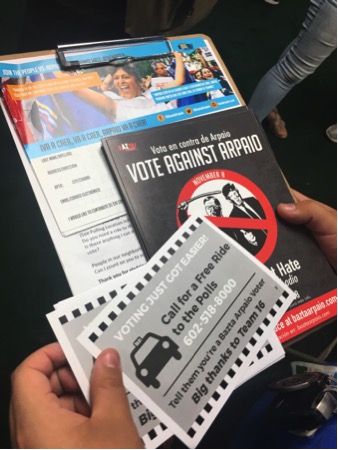 They also organized marches, from high-school walkouts to mobilizations of 10,000 people at the State Capitol, creating community spaces where, as Gomez says, ​“we could breathe together.”

Then they started to win. They defeated five anti-immigrant bills in the state legislature in 2011, successfully organized a recall of SB 1070 sponsor — and notorious racist — state Sen. Russell Pearce and helped elect a more progressive Phoenix City Council. Along the way, the coalition of grassroots organizations registered hundreds of thousands of voters. The registration campaign was not episodic, pegged to elections, but ongoing throughout the year.

Maricopa County supervisor Steve Gallardo told ThinkProgress that the county has seen a record number of new Latino voters registered for this election, and he expects the largest voter turnout in Arizona history. There has already been heavy early voting, with one million ballots cast. 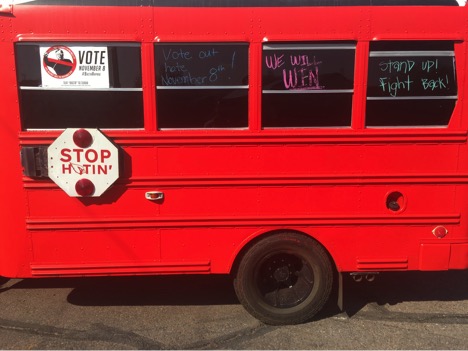 When we joined Gomez at the LUCHA office on Thursday afternoon, the effort was clearly a well-oiled machine. Crammed into the space were 40 young people who were trained, organized and prepared to fan out into neighborhoods across the county. There was no ​“enthusiasm gap” in this room, but instead a sense of power and possibility.

It makes sense. People in Maricopa don’t have the luxury of being cynical about the presidential election. Trumpism is not something people here have to imagine; it is something they and their parents have lived through. So, while sending Arpaio into retirement is a priority, ensuring Donald Trump is not the next president of the United States is equally crucial.

LUCHA member Flor Benavides believes a Trump presidency would threaten the safety and sense of community that is being rebuilt in Maricopa County. She describes going to the mall on the weekend before SB 1070 passed. It was packed. That changed after the bill became law.

“Then we would go [to the mall] and it was so lonely,” she recalls. ​“Where is everyone? If the wrong candidate becomes president this year, we are going to lose that family and closeness.”

The residents of Maricopa have come a long way and they are not looking to go backwards. ​“I’m not scared,” says Gomez. ​“We feel like we can stand up to anyone because we have a village behind us. The community is very organized and powerful. And love is at the center of all our organizing.”

If love is an antidote for hate, then love, community and power are on the verge of transforming life for many in Arizona. 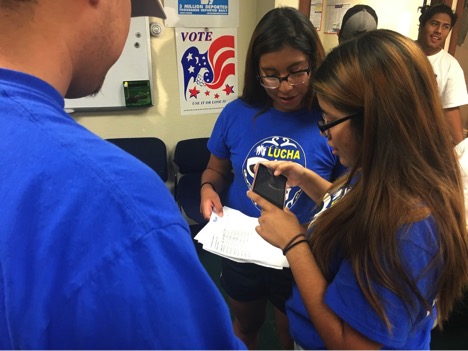 George Goehl is a longtime community organizer. He is the host of To See Each Other, a documentary podcast about rural organizing, and the former director of People’s Action, a national people’s organization working in urban, suburban and rural communities.

Have thoughts or reactions to this or any other piece that you'd like to share? Send us a note with the Letter to the Editor form.
More articles by George Goehl
2022 MidtermsCover StoryFeatureRural America
The Rural Vote Is Again in Play
The midterms showed that rural voters must be an integral part of the Democratic strategy if they want to win in 2024.
Cover Story
How Democrats Won and Lost
And what the surprising results mean for the Left.
ViewpointRural America
How Do You Flip Rural Trump Voters? Talk to Them.
In 2016, establishment Democrats all but ignored rural communities. Groups like People's Action are changing that, one conversation at a time.
Similar articles
Feature
Toppling the Tea Party
In 2014, progressives hope to take down the GOP gubernatorial class of 2010
David Moberg
Feature
Gas Export Push Gains Steam, Bulldozing Environmental Concerns
The Senate and House Energy Committees call to fast-track liquefied natural gas exports.
Cole Stangler
Feature
Downton Abbey, Season 4, Episode 8: Dear Abbey, What’s to Become Of Us?
One writer's advice for Downton's plot-twist-beset heroes and heroines.
Jude Ellison Sady Doyle
Join our newsletter
Fearless journalism, emailed straight to you.
Subscribe and Save 59%