I Believe GMOs are Safe to Eat, but I’d Never Let Them on My Farm

Those of us in the good food movement have spent a lot of time and energy attacking genetically modified foods for the wrong reasons. For years, skeptics have claimed that GMOs caused a whole range of health problems, from autism, to gluten intolerance, to cancer. But two decades of studies have failed to produce any smoking guns. It’s now time that we all accept the scientific consensus — GM foods are probably as safe to eat as non-GMO.

But that doesn’t lessen my opposition to genetic modification one bit.

First of all, just because the GM foods on the market today appear to be safe, it doesn’t mean that the GM foods coming down the pipeline will be. The big agricultural companies are working on new crops with multiple genetic modifications that are ​“stacked” one on top of another, in the industry jargon. The health effects of GM foods have been tested primarily by releasing them into the market and seeing what happens. You and I have been the guinea pigs. So far, we’ve been lucky. We might not be in the future.

But that’s not my biggest concern. Almost all GM crops grown in North America are engineered to resist insects, or to be resistant to herbicides. That’s why, when GM crops were first introduced 20 years ago, they came with a dual promise — they would increase yields and reduce the need for pesticides. GM crops, farmers were told, wouldn’t have to compete with weeds or be eaten by insects, so they would produce more, with less chemicals. That’s still the promise big agricultural companies like Monsanto and Bayer make today, but it turns out that farmers, and the public, have been sold a bill of goods.

A few weeks ago, at the height of the pre-election hysteria in the United States, the New York Times published the results of an investigation into genetically modified crops that would have been major news if we hadn’t all been mesmerized by The Donald’s nightmarish march to the White House.

The article compared three decades of data from the United States and Canada (where GM crops dominate) to Western Europe (where almost all GM crops are banned). The result? GM crops have failed to deliver on both their major promises.

Before genetic modification was invented, Western European farmers had equal or better yields of major crops like corn, canola and sugar beets. When North American farmers adopted GM crops, it did nothing to close the yield gap. European farmers still produce more per acre, despite the fact that they grow no GMOs.

When it comes to pesticides, it’s the same story. Insecticide use has declined on both sides of the Atlantic since GM crops were introduced, but it has declined faster in Europe. Overall pesticide use (both insecticides and herbicides) has also gone down in Europe, but it has risen dramatically in North America, driven by a massive increase in the use of herbicides.

That shouldn’t be a surprise — most GM crops are engineered to be resistant to herbicides, which allows a farmer to spray a field of GM corn, for example, and kill only the weeds. But as more and more North American farmers planted only GM crops, they used more and more herbicide, which eventually led to resistance in many weeds, which in turn required more herbicide.

Farmers in Canada and the United States are now caught in a spiral of increasing chemical dependence that is the exact opposite of what the proponents of genetic modification promised. This is a win-win for Big Ag — the same companies that produce the GM seeds also make the chemical pesticides they require.

Graphs showing the percentage of U.S. acres sprayed with glyphosate and the global revenue from sales of genetically engineered seeds. (Image: food​free​domkelow​na​.blogspot​.com)

The Times investigation rightly points out that opposition to GMOs has largely missed the point — we should be skeptical of genetic modification not because it’s making us sick, but because it doesn’t actually confer any benefit to farmers or eaters. In fact, genetic modification is increasing our reliance on agricultural chemicals, and the risks of that trend — to our own health, and to the health of our planet — are well documented and very real.

Why are we growing all these crops in the first place?

When I listen to the GMO debate, I’m often struck by a question that both sides fail to ask: Why are we growing all these crops in the first place? Virtually all the major GM crops go to feeding animals, or producing unhealthy, highly processed foods. We grow vast acreages of GM corn to produce high fructose corn syrup. We produce untold millions of tons of GM soybeans to feed cattle. We devote the very large majority of our farmland to producing meat and junk food, and that’s an incredibly inefficient and unhealthy way to feed our growing population.

Our farm is shut down for the winter right now, and this is the time of year we order our seeds for next season. As organic growers, we’re prohibited from planting any genetically modified crops, but we wouldn’t grow GMOs even if we could. We don’t like the idea of paying multinational corporations a hefty premium for their patent-protected GM seeds, or of spraying our land with the poisonous chemicals they require.

The crop traits we need are provided by the skill and experience of the plant breeders and seed companies we work with who use plant-breeding techniques that have been around for millennia. The rich, organic soil on our farm produces healthy plants that are naturally resistant to insects and can out-compete weeds.

And we grow vegetables that feed people, rather than growing genetically modified commodities that feed our unhealthy industrial food system. Our farm is GMO-free because it’s better for our business, our environment and our community. That seems like reason enough. 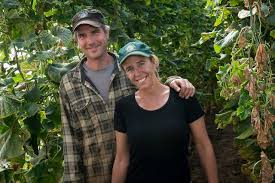 “GMOs Are Safe To Eat, But I’d Still Never Grow Them On My Farm” was originally published on the Huffington Post Canada website and is reposted on Rural America In These Times with permission from the author.

Brent and his wife Gillian run The New Farm, a certified organic family farm located near the village of Creemore, Ontario, that supplies premium quality vegetables to fine restaurants and speciality retailers. Brent is the author of The New Farm: Our Ten Years on the Front Lines of the Good Food Revolution , to be published by Random House Canada in May.
Have thoughts or reactions to this or any other piece that you'd like to share? Send us a note with the Letter to the Editor form.
Similar articles
Rural America
While Meatpacking Companies Reap Big Profits, Cattle Ranchers Struggle
Grocery store beef prices are rising. The rancher’s share is falling. And the companies that dominate the highly-concentrated meatpacking industry are making a killing.
Mary Hennigan
ViewpointRural America
2020 Was The Year the Mask Came Off
We learned some things this past year that we shouldn’t forget. Here’s a roundup of stories from Rural America In These Times that bear re-reading.
Joseph Bullington
Rural America
‘We Get There First or White Supremacists Do’: How These Rural Canvassers Disrupt Racist Narratives
Jordan Green
Join our newsletter
Fearless journalism, emailed straight to you.
Subscribe and Save 66%