Chicago teachers and activists protested in front of the Mexican Consulate Wednesday morning to show their solidarity with the Coordinadora Nacional de Trabajadores de la Educación (CNTE) and teachers in Oaxaca, Mexico, after attacks by police on protesters left at least eight dead and more than 100 injured Sunday.

On June 19, about 50 miles northwest of Oaxaca’s historic center, CNTE protesters from Section 22 of the union and sympathizers clashed with federal and state police in the municipality of Nochixtlán. Official statements provided by the Mexican government claimed officials involved in the operation were unarmed, although video and photography of the clashes on the ground showed otherwise. Since, supporters of the CNTE’s struggle have organized world wide. 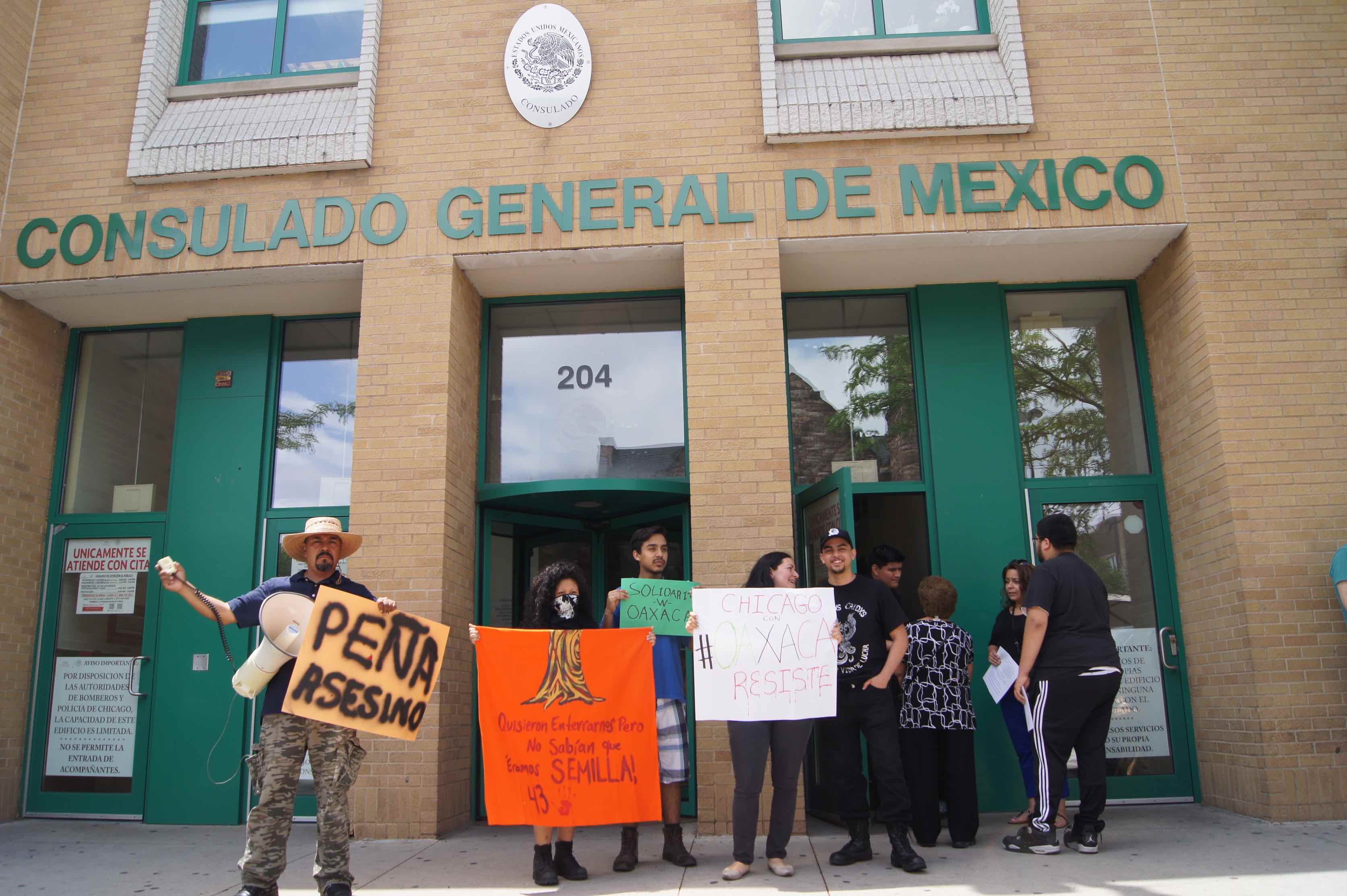 Sarah Chambers, a special education teacher at Saucedo Elementary in Chicago’s Little Village neighborhood and a member of the Chicago Teachers Union (CTU) Executive Board was out with other CTU members to show their solidarity.

Teacher union members were joined by organizers from Pilsen Alliance and the Chicago Committee for Justice in Ayotzinapa. CTU Vice President CTU Jesse Sharkey and Financial Secretary-Elect Maria Moreno composed a letter on behalf of the union to present to the Mexican Consulate to demonstrate their solidarity with members of the CNTE in Mexico.

“As a strong social justice union, the members of the CTU are shaken and outraged to learn of the arrests of seven leaders of Section 22 in Oaxaca, including Ruben Nuñez Ginés and Francisco Villalobos,” the letter stated. ​“We consider them to be prisoners of conscience and demand their immediate release.”

Sharkey was able to deliver the letter and received a signature from Carlos Valera, the Consul for Community Affairs at the Mexican Consulate, recognizing that the demands of the CTU were heard. According to Sharkey, however, Valera was ​“unable to give any information at all, he could neither confirm nor deny how many teachers were being detained and said that we were going to have to wait for an official government statement.”

According to the Mexican newspaper La Jornada, 27 teachers detained during the confrontation with police on June 19 were released early Wednesday morning, although Nuñez Ginés and Villalobos have yet to be released, according to reports. Additionally, according to an interview with Mexican activist Gustavo Esteva by Amy Goodman of Democracy Now!, 9 individuals have been assassinated thus far while at least 23 remain disappeared, 21 detained, 45 hospitalized and more than 100 injured. 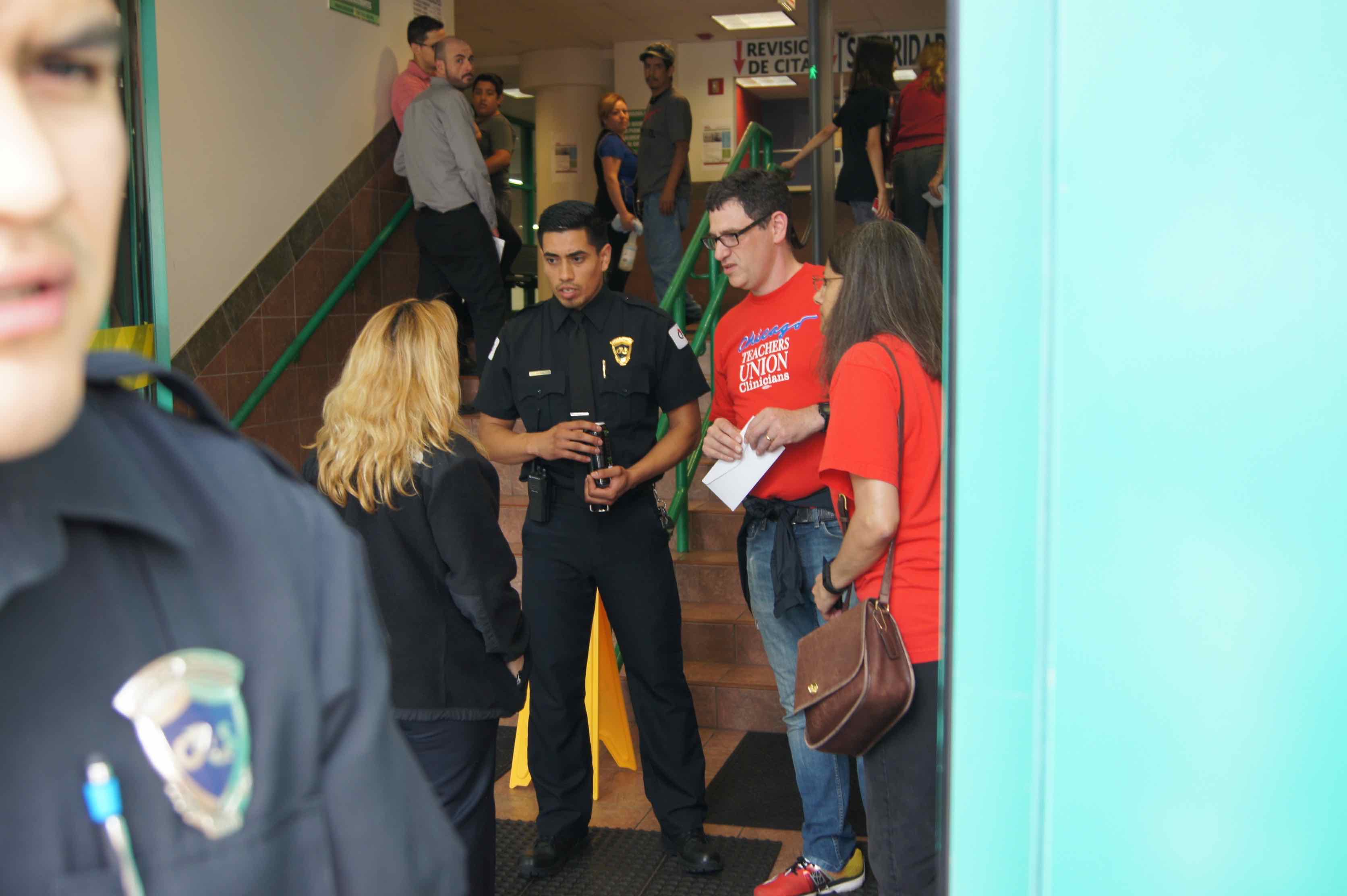 Mexican Consulate security speak with the CTU’s Jesse Sharkey and Maria Moreno before delivering a letter of solidarity to consulate staff. (Parker Asmann)

“There’s obvious parallels between education reform in Mexico and the U.S., in particular here in Chicago,” Sharkey says. ​“We’ve learned a lot from Mexican teachers and we’ve got actual relationships with unions in México,” he continued. ​“On a very personal level, the reports that community leaders have been arrested and we can’t even get an answer regarding what they were arrested for or even if they were arrested at all is extremely troubling and it’s not something that we want to let slip by.”

CTU organizer and activist Rebecca Martinez held signs and chanted solidarity slogans into a loudspeaker as the small crowd that initially gathered continued to grow in numbers. Before long, musicians were playing corridos, local activists staged a die-in with their arms locked together in front of the consulate, and protesters blocked traffic and encouraged passing cars to honk their horns as a show of support.

“I think it’s important for people in Chicago, people outside of México, to support and be aware of what’s going on in México because there’s just not a lot of accountability or transparency in the Mexican government right now,” Martinez said.

The Mexican government’s relationship with its citizens became especially tense in September 2014. Students from the Ayotzinapa Rural Teachers’ College in Guerrero state were making their way to Mexico City to commemorate the students murdered in the 1968 Tlatelolco Massacre at the hands of Mexican military and police before they were intercepted themselves by local police in Iguala. While the government has offered up an ​‘official version’ of what took place on the night of Sept, 26, 2014, the 43 students remain disappeared and no answers have been given about their whereabouts.

CTU support of the CNTE in México is particularly crucial due to the similarities between both groups’ fight against neoliberal education reforms. In Oaxaca and Chicago, reforms have been proposed that require teacher evaluations, a merit-based pay and promotion system and other reforms. ​“It’s the same corruption in Chicago as in México,” Chambers said. 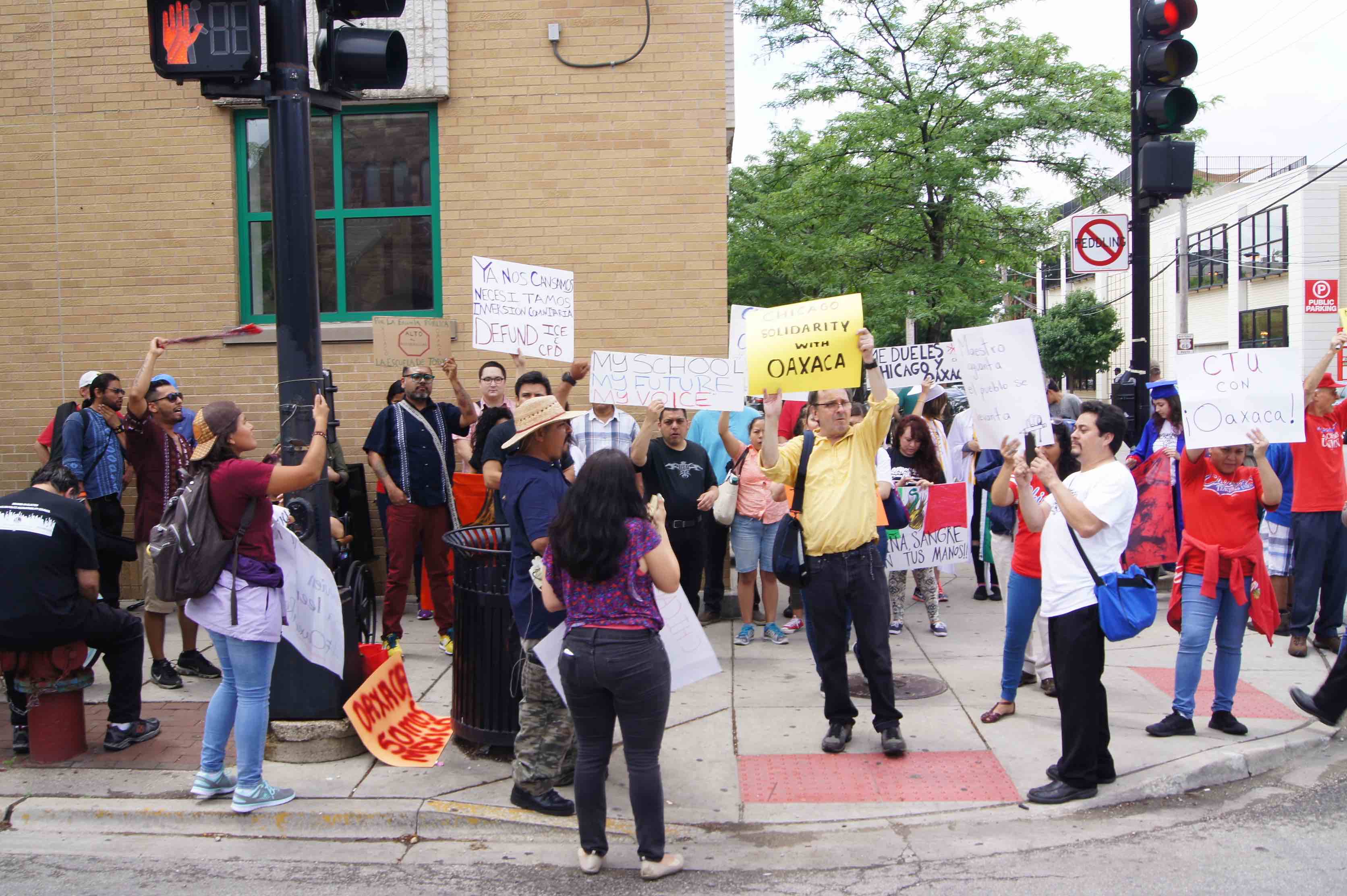 Chambers also explained how the CTU has learned a lot from the organizing efforts of teachers unions in México, primarily the CNTE.

“Oaxaca teachers are an inspiration, they take the organizing model of unionizing to fight these reforms and to see the oppressed succeed,” said Chambers. ​“Here in Chicago we’ve had mass marches and strikes and taken arrests, I’ve taken two already, and the Oaxacan teachers have taken militancy to a new level with blocking expressways, they’re fighting tooth and nail.”

Martinez explained a personal connection of place, nationality and origin that she has with teachers in México as both of her parents are from there.

“We’ve built personal relationships with individuals in México. In particular, I’ve been able to communicate with teachers in Veracruz who have rebelled. They work in incredible places in the mountains in school buildings that aren’t really school buildings.

“They’re in some of the most marginalized communities trying to teach and deal with these education reforms that aren’t really about teaching. It feels very similar to communities on the south and west sides of Chicago,” Martinez said.

Before the 2013 – 14 academic year, 50 Chicago Public School were shut down by the school board despite citywide protests and widespread opposition from parents. The majority of these schools were located on the city’s South and West sides where the students are predominantly Black and Latino.

“All of us need to stand together in solidarity to fight polices because they’re coming for all of us, there are cities around the country that maybe haven’t felt these policies, but they will come.

See the options
Parker Asmann is a Summer 2016 Editorial Intern at In These Times. He is an Editorial Board Member for the Chicago-based publication El BeiSMan as well as a regular contributor to The Yucatan Times located in Merida, Mexico. He graduated from DePaul University in 2015 with degrees in journalism and Spanish, as well as a minor in Latin American Studies.
Have thoughts or reactions to this or any other piece that you'd like to share? Send us a note with the Letter to the Editor form.
More articles by Parker Asmann
Feature
The U.S. Spends Millions Funding Central America’s Drug War. A New Report Says It Hasn’t Worked
Militarized law enforcement may have done more damage to human rights than it has to crime rates.
Labor
Domestic Workers in Ill. Win Bill of Rights: “Years of Organizing Have Finally Paid Off”
Feature
Why a Georgia Congressman is Fighting to Stop Security Aid to Honduras
Rep. Hank Johnson talks about the struggle for human rights and the future of U.S.-Honduras relations.
Similar articles
Labor
Trump’s NLRB Just Quietly Ruled to Make Union Pickets Illegal
Moshe Z. Marvit
Labor
What the Honeywell Lockout Taught Me About International Labor Solidarity
John Paul Smith
Labor
States Can’t Win the Endless ‘Business Climate’ Game
Roger Bybee
Join our newsletter
Fearless journalism, emailed straight to you.
Subscribe and Save 66%