There’s a funny Monty Python skit from years ago where a son comes home to his parents. His father is furious at him because he won’t go into the family business — writing plays and poetry — and has rebelled to become a coal miner instead. The skit is funny because back in the 1970s when it aired, everyone knew that coal mining was a dirty, dangerous, terrible way to make a living.

So it is particularly bizarre that the Trump administration seems to be infatuated with coal and coal mines. In fact, they love coal so much that they want us all to pay more for it. Recently, Secretary of Energy Rick Perry has been pushing a proposal to provide tax-payer subsidies for electrical plants if they burn coal. This will, apparently, persuade them to switch from cheaper, cleaner natural gas.

And then there was Scott Pruitt, the fox Donald Trump appointed to guard the EPA’s chicken coop, announcing that the ​“war on coal” was now over because the EPA was going to walk away from the Obama Administration’s clean energy goals.

But there never was a war on coal and jobs mining coal aren’t coming back. Employment in the mines topped out at over 800,000 and that was in the 1920s. Coal mining jobs have been in a steady, inexorable decline ever since. There are two basic reasons for that.

First, coal operators started automating work in the mines after World War II. More machines, fewer workers. Second, the market for coal has been in steady decline since the 1950s. Railroad locomotives, once major consumers of coal, switched to diesel. People used to heat their homes with coal. Those furnaces are gone, replaced by oil and natural gas systems. Cheaper, cleaner and so much easier. Raise your hand if you want to shovel coal into your furnace this winter.

The nation has been transitioning away from coal for decades and that simply isn’t going to change. Here’s how one journalist described it: ​“Now, with heavy competition from oil and the large, highly mechanized coal mines, the operators of the small mines are squeezed; the Kentucky miners have been forced into poverty by the depression in the industry.” That was written in 1963.

The aforementioned Monty Python sketch in which a world renowned blue-collar playright is at odds with his elitist coal-mining son. (Video: YouTube / Kenny Teeology)
Today there are roughly 50,000 jobs mining coal, less than a tenth of that 1923 figure. There are far more jobs now in health care in West Virginia than there are in the coal mines. Here in Ohio, there are roughly 2,500 people mining coal. Meanwhile, over 105,000 Ohioans work in the clean energy industry according to a recently released study and over 600,000 nationwide. Neither Trump nor Pruitt seem to know this because for them, apparently, not all jobs matter.

At the same time, we are still living with the destruction that coal and coal mining have wrought. The sulphur, mercury and carbon that coal-burning spews into the air; the toxic mine wastes that regularly spill into the water. Entire landscapes stripped, denuded and eroded. We want more of this?

And then there are the human costs. Between 1870 and 1970, 31,000 miners died in the coal mines of Pennsylvania alone. Do that math: one miner killed every day for 100 years. In 2013, 25,000 former miners died of black lung and related respiratory diseases. Pruitt held his coal mining pep-rally in Hazard, Ky., oblivious to the irony of the name.

Hazard’s population peaked in 1940 — it’s declined about 30 percent since then and it was always a small place. It was also at the center of bitter labor unrest in the early 1960s that regularly turned violent. The house of a local coal operator was blown up with dynamite by angry miners in Hazard. I’m betting Scott Pruitt did not know that, either. 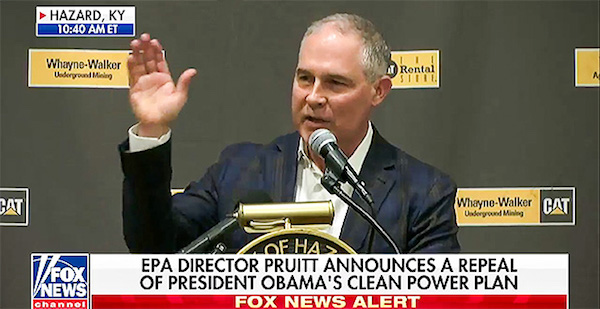 (“Really, There’s Not Much To Miss About Coal” was first published by the Dayton Daily News and is reposted on Rural America In These Times with permission from the author.)

Donate
Steven Conn is the W. E. Smith Professor of History at Miami University in Oxford, Ohio. He is the author of ​“Americans Against the City: Anti-Urbanism in the 20th Century.”
Have thoughts or reactions to this or any other piece that you'd like to share? Send us a note with the Letter to the Editor form.
More articles by Steven Conn
Rural America
When it Comes to High-Speed Broadband Infrastructure, Rural America Could Really Use an FDR
Rural America
In the Fine Print: What Insurance Companies Know About Fracking and Climate Change
Rural America
Peas in a Pod: The “Inner City” and 21st Century Rural America
Similar articles
Rural AmericaThe Wisconsin Idea
Growing food sovereignty on the shores of Lake Superior
On a small Wisconsin island, members of the Bad River Band of Lake Superior Chippewa and volunteers provide fresh food and restore ancestral connection through gardening.
Kip Dooley
Rural America
An Open Letter to Biden from Indigenous Peoples
Trump wrecked the relationship between the U.S. government and Native nations. Here's how the Biden Administration can repair this damage.
Rural America In These Times
Rural America
Report: More Environmentalists Were Murdered Last Year Than Ever Before
Ashoka Mukpo
Join our newsletter
Fearless journalism, emailed straight to you.
Subscribe and Save 66%