Last week, the chairman of the House Agriculture Committee made headlines by unveiling a truly terrible farm bill proposal, one that dramatically undercuts the nation’s most successful nutrition assistance program and threatens to throw the entire farm bill process into chaos. Yesterday, after four-plus hours of rancorous debate, the committee advanced the chairman’s deeply flawed bill on a party-line vote, 26 – 20. We expect the full House to take up the bill in the coming weeks.

Beyond this highly partisan bill’s cynical slap at millions of low-income people and their communities, there’s also very little for farmers to like. Deep cuts to incentive programs that help them protect water quality, conserve soil, and build resilience to floods and droughts are among the bill’s many disappointing aspects, along with a failure to invest in connecting farmers with new local customers.

In stark contrast, a poll released today shows that farmers across the political spectrum are eager for precisely the kind of tools and incentives House Republicans have firmly turned their backs on. And soon they may be looking for political candidates who will give it to them.

The new poll was conducted in March by Iowa-based RABA Research on behalf of the Union of Concerned Scientists (UCS). Using telephone interviews supplemented by an online questionnaire, the researchers queried more than 2,800 farmers in seven states—Iowa, Illinois, Kansas, Michigan, Ohio, Pennsylvania, and Wisconsin—to better understand how they are thinking about farm policy and sustainable agriculture.

You might expect that farmers would regard the farm bill as an important piece of legislation, and the poll shows that they do. Fully three-quarters of them said the farm bill is ​“somewhat” or ​“very important” to their personal livelihoods. In an era of deep cynicism about the ability of Congress to helpfully affect the lives of everyday Americans, it’s a striking number, and it particularly contradicts recent news reports suggesting that rural America ​“doesn’t have time” for the farm bill. 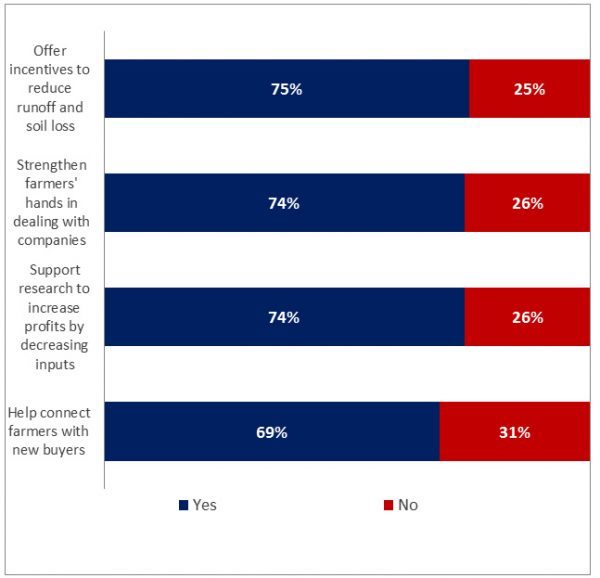 Survey question: I’m going to read a list of ways that US farm policy can shape agriculture in the years ahead. Answer yes or no to indicate which you think are important to the future of farming. (Infographic: Union of Concerned Scientists)

It’s election season, and farmer-voters are looking for change

Perhaps the most striking finding in the poll is this: Farmers are looking to back political candidates who will deliver innovation and sustainability for agriculture.

A surprising 72 percent of farmers across the seven states said they would be more likely to support a candidate for public office who seemed to favor farm success through sustainable agriculture priorities instead of business as usual. That number was even higher in some states — 74 percent in both Michigan and Pennsylvania. (Swing states, anyone?) And remarkably, that high level of support wasn’t dependent upon party affiliation, but was held by 76 percent of Democrats, 73 percent of Republicans, and 67 percent of those who identified politically as ​“something else” across the seven states. 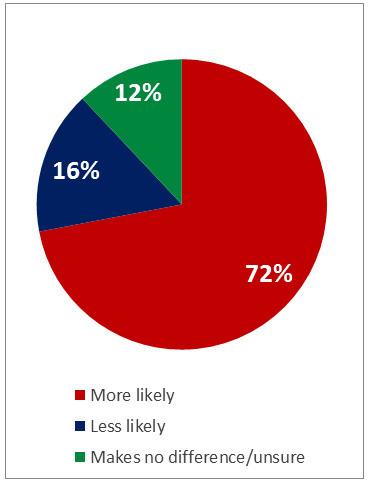 Survey question: If a candidate for public office seemed to favor farm success through sustainable ag priorities instead of business as usual, would you be more or less likely to support that candidate? (Infographic: Union of Concerned Scientists)

This finding shows that an overwhelming majority of farmers are seeking change in the federal government’s priorities for supporting U.S. agriculture. And why should we be surprised? The poll was conducted just before tensions over trade with China threatened to erupt into a full-scale trade war—in which farmers would be early casualties. But those trade tensions are merely compounding the trouble farmers have faced in recent years as prices of leading U.S. farm commodities have plunged. Farm income is projected to hit a 12-year low this year, leaving many farmers uneasy about the status quo and looking for new solutions.

The House bill neglects or actively undercuts precisely the programs that our poll shows farmers want. Existing working land conservation programs provide incentives and technical support for farmers to adopt science-based practices — like planting cover crops and more diverse crop rotations—that reduce erosion and water-polluting runoff, lessen the need for expensive chemical inputs, and build healthy soil to buffer farmers from the impact of floods and droughts. The bill advanced yesterday cuts nearly $5 billion from these programs over 10 years, and completely eliminates the Conservation Stewardship Program—a program so popular with farmers and already so underfunded that in recent years it has had to turn away as many as 75 percent of qualified applicants.

At the same time, the House farm bill as written also largely fails to take on provisions of the Local FARMS Act, a bipartisan proposal meant to expand the customer base for small and midsize farmers while improving access to healthy food (which is inadequate for 15.6 million US households). By overlooking the Local FARMS Act — which includes provisions to strengthen farm to school programs, promote farmers markets, and otherwise build connections between farmers and local consumers, especially low-income individuals and families — the authors of today’s bill are bypassing an opportunity to create jobs and establish reliable revenue streams for struggling farmers while also increasing access to healthy and affordable food for more of our neighbors.

Congress can do better — and we need to tell them

All this has led farm and conservation groups to join health and anti-hunger groups in panning the House farm bill proposal. The National Farmers Union — while attempting to be positive — similarly expressed frustration with its failure to give farmers what they need:

[C]ongressional leadership has severely hamstrung the committee’s ability to address the six-year, 50 percent decline in the farm economy. While they’ve shown little regard for spending and deficits this Congress, they’ve failed to provide adequate resources for food and agriculture at a time of grave financial strain on family farmers and ranchers. This is irresponsible and harmful.

The draft bill that the House Agriculture Committee voted on is so fundamentally flawed, we don’t expect many opportunities to strengthen it through the amendment process. But here are two areas — the Local FARMS Act and the SNAP program — where we may be able to make the bill more responsive to the needs of farmers and the public interest.

(​“Will Congress Give Farmers the Farm Bill They Want” was originally posted on the Union of Concerned Scientists’ blog and is reposted on Rural America In These Times with permission. To tell Congress to fight for farmers and healthy food in the farm bill, click here.)

See the options
Karen Perry Stillerman is a senior food and environment analyst for the Union of Concerned Scientists. She’s an advocate for transforming the U.S. agriculture and food system to one that produces affordable, healthful foods for consumers; reduces air and water pollution; and builds healthy soil for the farmers of tomorrow. She holds a master’s degree in public affairs and environmental policy. Follow her on Twitter @KarenStillerman.
Have thoughts or reactions to this or any other piece that you'd like to share? Send us a note with the Letter to the Editor form.
Similar articles
Rural America
This Map Shows How Growing Seasons Are Shifting Due to Climate Change
EPA data shows that in some parts of the United States, the growing season is 50 days longer now than it was 1895.
Sky Chadde
Rural America
Toward a World Without Roadkill: Appalachians Make the Case for Wildlife Crossings
In Appalachia, highways fracture the habitat of bears, elk, deer and other wildlife. Locals are pushing to make roads safer for animals and drivers.
Frances Figart
Rural America
Vandana Shiva: The Pandemic Is a Consequence of the War Against Life
The health emergency of the coronavirus is inseparable from the health emergency of extinction, biodiversity loss and climate change
Vandana Shiva
Join our newsletter
Fearless journalism, emailed straight to you.
Subscribe and Save 66%