Not Covered: Why Our National Flood Insurance Program is (Also) Underwater

Editor’s Note: The following analysis was first published shortly after Hurricane Harvey devastated a large portion of South Texas (killing more than 70 people and costing yet-to-be-tallied billions of dollars in flood damages) but three days before Hurricane Irma made landfall at Cudjoe Key, in the lower Florida Keys, on the night of September 10. Before hitting the U.S. mainland, Irma tore a path of destruction through numerous islands in the Caribbean.

In Florida, search-and-rescue operations are still underway, entire neighborhoods have been destroyed and millions of people statewide are without power. Meanwhile, residents who heeded evacuation warnings are anxiously awaiting the chance to return to their homes and businesses — in some cases, only to find out what little the storm left of the structures and possessions they left behind.

In both states, even with hypothetically unlimited financial assistance, rebuilding the infrastructure that’s been lost will take years. Unfortunately, a majority of these losses are uninsured. Worse still, the federal program established in 1968 to help people recover from catastrophic flood damage is already $25 billion in debt.

What is flood insurance?

Homeowners’ insurance does not cover damage to a home caused by flooding. A homeowner must have a separate policy to cover flood-related losses, defined as water traveling along or under the ground.

Most such policies are underwritten by the National Flood Insurance Program, which is part of the Federal Emergency Management Agency (FEMA). The National Flood Insurance Program was established in 1968 to address the lack of availability of flood insurance in the private market and reduce the demand for federal disaster assistance for uninsured flood losses. Another purpose was to integrate flood insurance with floodplain management, which includes such things as adopting and enforcing stricter building codes, retaining or restoring wetlands to absorb floodwaters and requiring or encouraging homeowners to make their homes more flood-resistant.

How many American homeowners have flood insurance?

It is difficult to determine exactly how many homeowners have flood insurance.

The National Flood Insurance Program had just under five million policies in force as of June 30. Of these policies, approximately 68 percent were on single-family homes and 21 percent on condo units. There is no source on how many private flood policies are in force, but my sense is that it is very small relative to the number of National Flood Insurance Program policies.

In recent years, the number of such policies has been dropping across the country. Some of the counties hardest hit by Harvey, for example, such as Harris (which includes Houston), have experienced significant declines.

A more revealing — and more difficult to ascertain—stat is the share of homeowners in a disaster area who actually have flood insurance. In Harris County, for example, experts estimate that only about 15 percent of homeowners are insured for floods — though the percentage should be higher in areas near coastlines. 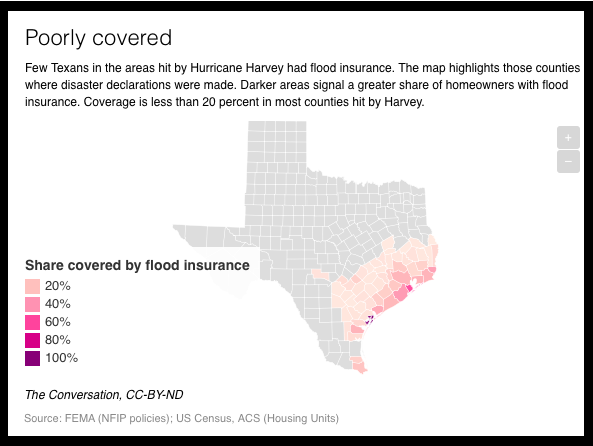 Why do people at great risk of flooding forgo insurance?

A number of factors affect a homeowner’s decision to buy flood insurance (or not).

People who perceive that their exposure to floods is high are more likely to buy it, all other things equal. And the mandatory purchase requirement forces owners of mortgaged homes located in Special Flood Hazard Areas — areas at high risk for flooding — to buy insurance.

However, 43 percent of homeowners incorrectly believe that their homeowners’ insurance covers them for flood losses.

Other factors also come into play, such as a lack of information, the difficulty of calculating flood risk and the expectation that the government will provide disaster assistance — which is rarely the case.

What does flood insurance cover?

With a National Flood Insurance Program policy, a homeowner can purchase coverage on a dwelling up to $250,000 and the contents of a home up to $100,000. It does not cover costs associated with ​“loss of use” of a home.

The National Flood Insurance Program policy limits have been in effect since 1994 and need to be updated to account for the increase in the replacement cost of homes and the actual cash value of their contents. Although not the best measure of the replacement cost, the median price of new homes sold in the U.S. has soared 132 percent since 1994.

Some homeowners buy additional flood protection from private insurers to make up any shortfall.

Why is the National Flood Insurance Program underwater?

The National Flood Insurance Program has faced considerable criticism over its underwriting and pricing policies, which have resulted in a substantial debt. Essentially, its premiums are not high enough to cover how much it pays out on claims and its other costs.

Part of the problem is that about 20 percent of the properties the program insures pay a subsidized rate. But many other National Flood Insurance Program policyholders are also paying premiums substantially less than what it costs to insure them because the rates do not adequately account for the catastrophic losses incurred during years when more major storms than normal strike, such as Katrina and Rita in 2005 and Sandy in 2012. As a result, the National Flood Insurance Program owes an accumulated debt of $25 billion to the U.S. Treasury. 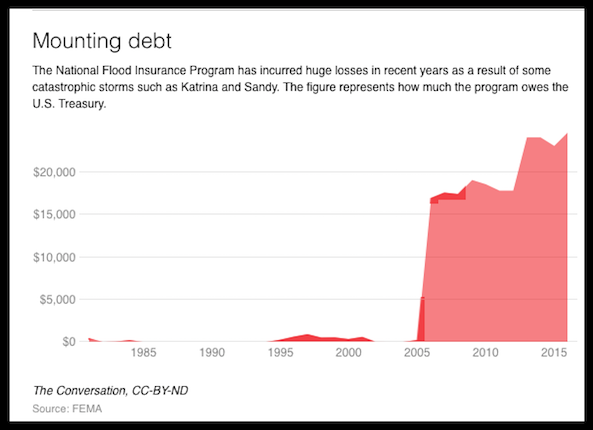 Hurricane Harvey (and potentially other storms such as Irma that may follow) will substantially increase this debt. CoreLogic estimates that National Flood Insurance Program-insured flood losses from Harvey alone will be $6 billion to $9 billion.

In the short term, Congress will have to increase the National Flood Insurance Program’s borrowing authority for it to pay the claims that will result from Harvey and other storms this year. Lawmakers could make a general fund appropriation to forgive all or a portion of the National Flood Insurance Program’s debt, but it has shown no interest in doing so.

These inadequate rates also exacerbate the moral hazard created by flood insurance. People are more likely to buy, build or rebuild homes in flood-prone areas and have diminished incentives to invest in flood risk mitigation, such as by elevating their home, if they can buy insurance at below-cost rates.

What can be done to fix the program?

Legislative efforts to reform the National Flood Insurance Program to put it on firmer fiscal footing have produced mixed results.

The Biggert-Waters Act of 2012 made a number of changes to the program, such as increasing premiums and other changes to make it ​“more financially stable,” that would have gone a long way to restore its fiscal solvency. However, an outcry from homeowners in high-risk areas such as coastal Florida led to the Homeowners Flood Insurance Affordability Act, passed in 2014, that limited or rescinded many of the Biggert-Waters rate increases.

Fundamentally, the program that millions of Americans rely on to help them rebuild their lives after a devastating flood needs to be fixed. Its dire financial straits could be resolved by either making taxpayers foot more of the bill or increasing premiums closer to full-cost rates for most homeowners, while also raising total coverage levels.

At the same time, the government needs to do more to convince or compel more at-risk homeowners to buy flood insurance — which would be harder to do if it were to raise rates. To me, this suggests that increasing taxpayer support for the NFIP will have to be part of the solution so that pricey premiums don’t become a deterrent to someone buying insurance.

With the likelihood of much more flooding in the coming weeks and years, more needs to be done to mitigate the risk, including producing more accurate and timely maps of the flood risk in various areas, especially high-risk areas, educating people about what those risks really mean and helping relocate homeowners as necessary.

(“How Flood Insurance Works: 6 Questions Answered” was first published by The Conversation and is reposted on Rural America In These Times thanks to a Creative Commons license. Robert W. Klein does not work for, consult, own shares in or receive funding from any company or organization that would benefit from this article, and has disclosed no relevant affiliations beyond the academic appointment above.)

Robert W. Klein is an Associate Professor and Director of the Center for Risk Management Insurance Research at Georgia State University. Before that, Klein served as the director of research for the National Association of Insurance Commissioners. He also served as a staff economist for the Michigan Insurance Bureau and the Michigan Senate Fiscal Agency.
Have thoughts or reactions to this or any other piece that you'd like to share? Send us a note with the Letter to the Editor form.
Similar articles
Rural America
A New Law Promised Debt Relief for Black Farmers. Instead, Some Got Collection Notices.
The American Rescue Plan included $4 billion in debt relief for farmers of color, but a lawsuit has thrown the program, and the farmers who need it, into limbo.
April Simpson
Rural America
How Cuts to Unemployment Benefits Will Hurt Rural People
Republican governors in at least 22 states are ending federal unemployment assistance. The cuts will hit hard in rural areas and communities of color.
Aallyah Wright
Rural America
Regrowing Indigenous Agriculture Could Nourish People, Cultures and the Land
European settlement, government policies and monoculture have nearly eradicated Native American farming practices. A growing movement is reclaiming them.
Christina Gish Hill
Join our newsletter
Fearless journalism, emailed straight to you.
Subscribe and Save 59%