Pennsylvania Dept. of Environmental Protection Sues Towns for Trying to Protect Their Environment

Fracking injection wells, which blast millions of gallons of water mixed with chemicals deep underground to expand fissures in the rock, have triggered earthquakes and polluted drinking water in several states. In order to prevent energy corporations from dumping toxic wastewater in their communities, two Pennsylvania townships drafted local constitutions banning the practice.

Providing another example of how far down the corporate rabbit hole state and federal governments have gone, on March 27 the Pennsylvania Department of Environmental Protection (DEP) — the state agency with the mission ​“to protect Pennsylvania’s air, land and water from pollution and to provide for the health and safety of its citizens”— sued these townships for interfering with the oil and gas industry.

The Pennsylvania Community Rights Network (PACRN) is a statewide, grassroots organization working to elevate community interests above corporate interests by advocating the right to local self-government. According to the group’s website:

The current structure of law in Pennsylvania systematically strips communities of the power to adopt laws to protect their health and safety, particularly when those laws come into direct conflict with corporate decision making. This system thus prohibits communities from banning projects and activities that they consider dangerous and harmful — everything from corporate factory farms to the land dumping of sewage sludge and ​“hydro-fracking” for natural gas. Unfortunately, Pennsylvania communities have found out the hard way that the existing structure does not provide a remedy for these problems, and that a corporate minority, with the blessing of the state, has almost wholesale control over our communities on almost any issue that really matters.

For 15 years, PACRN has been working alongside the Community Environmental Legal Defense Fund (CELDF) — a non-profit, public interest law firm that provides ​“free and affordable legal services to communities facing threats to their local environment, local agriculture, local economy and quality of life.” Thomas Linzey, a contributing writer to Rural America In These Times, is CELDF’s executive director and co-founder and serves as the organization’s chief legal counsel.

The permits are in direct violation of democratically-enacted Home Rule Charters in both Townships. The charters were drafted with the help of the Community Environmental Legal Defense Fund (CELDF). They established local constitutions that define not only government structure, but also rights and protections in the communities. Highland and Grant’s charters prohibit the depositing of frack waste as a violation of the communities’ rights to clean air and water. Residents adopted the measures because injection wells threaten drinking water supplies and have caused earthquakes in Ohio and Oklahoma, leading to their shut down.

On Monday, the DEP also sued both Townships, claiming the charters unlawfully interfere with state oil and gas policies.

Let’s be clear: our state agencies, tasked with ​“environmental protection,” are legalizing harmful activities by issuing permits to corporations with histories of violations. And, they are doing so against the will and sovereign law of the people who live in the community. Equally egregious, those state agencies are now suing communities who dare to stand up to unjust laws that privilege corporate interests above the communities’ health and safety. The meaning of ​“corporate-state” has never been more clear; it is painfully obvious whose interests our state agencies serve.

Grant Township Supervisor Stacy Long said, ​“Our community wrote a new constitution, with wide community support and input, to protect our rights and our environment. And now we’ve been sued, not only by a corporation that wants to profit by dumping toxic waste in our community, but also by our own state ​‘environmental protection’ agency. Our fight continues, but we also hope that the latest shameful actions by the DEP inspire others to stand with us, and stand up in their own communities, against unchecked corporate and state power.”

CELDF is proud to continue standing with both communities to resist efforts by Seneca, PGE, and the DEP to violate the rights of the people of Highland and Grant Townships.

Part of a larger movement 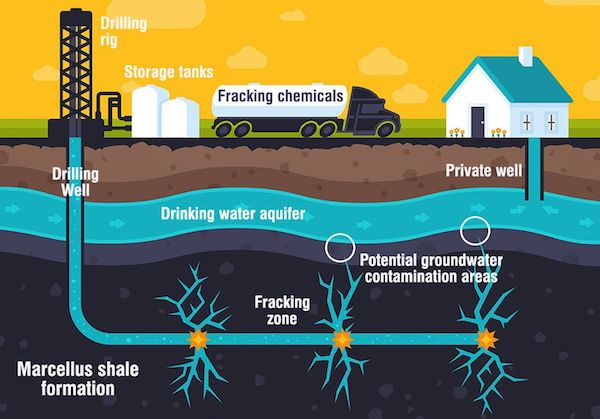 Support In These Times
This blog’s mission is to provide the public service of helping make the issues that rural America is grappling with part of national discourse.
Have thoughts or reactions to this or any other piece that you'd like to share? Send us a note with the Letter to the Editor form.
More articles by Rural America In These Times
ViewpointRural America
Dear Congress: Say No to Water Privatization in the Infrastructure Bill
Water costs have soared in recent years as federal funding for water infrastructure has shrunk. Privatization is the last thing we need.
Rural America
An Open Letter to Biden from Indigenous Peoples
Trump wrecked the relationship between the U.S. government and Native nations. Here's how the Biden Administration can repair this damage.
Rural America
In Less Than One Generation, We’ve Lost More Than 10 Million Acres of the Best U.S. Farmland
Similar articles
FeatureRural AmericaClimate
After Ida, This Louisiana Tribe Is Organizing Its Own Recovery
Armed with agricultural knowledge and mutual aid networks, the Houma people aren't waiting on the government to rescue them.
Joseph Bullington
Rural America
How a Rural Colorado Community Self-Organized a Successful Vaccination Effort
Immigrant community groups, forced to organize by the constant threat of ICE, have played a central role as vaccine information networks.
Dave Marston
ViewpointRural America
No Parks for the Poor
In the face of budget cuts, some land management agencies are ramping up user fees — and betraying the egalitarian promise of public lands.
Joseph Bullington
Join our newsletter
Fearless journalism, emailed straight to you.
Subscribe and Save 66%