Is the Biotech Industry Transforming a Natural Pesticide into a Super Toxin?

Is the supposed safety advantage of GMO crops over conventional chemical pesticides a mirage?

According to biotech lore, the Bt (Bacillus thuringiensis) pesticides introduced into many GMO food crops are natural proteins whose toxic activity extends only to narrow groups of insect species. Therefore, says the industry, these pesticides can all be safely eaten (by humans).

However, this is not the interpretation we arrived at after our analysis of the documents accompanying the commercial approval of 23 typical Bt-containing GMO crops.

In our publication, authored along with Madeleine Love and Angelika Hilbeck of the Swiss Federal Institute of Technology (ETH), we show that commercial GMO Bt toxins differ greatly from their natural precursors. These differences are important. They typically cause GMO Bt proteins to be more toxic. Worse, they also cause them to be active against many more species than natural forms of Bt toxins.

Monsanto, Syngenta, and Dow are the principal makers of GMO crops intended to kill pests. The vast majority of these GMO insecticidal crops, which include GMO corn, GMO soybeans, and GMO cotton, are engineered to contain a family of protein pesticides called Bt toxins. Such crops may contain up to six different Bt transgenes.

Bt toxins get their name from the bacterial species from which they are originally derived, Bacillus thuringiensis. Biotech seed companies and government officials commonly refer to GMO Bt toxins (which are also called Cry toxins) as ​“natural”. Commonly also, they state that GMO versions are identical to the Bt toxins used in organic agriculture or in forestry.

But, as we found, GMO Bt toxins are clearly distinct from natural Bt toxins and those used in more traditional farming methods:

1. Whereas natural Bt toxins are insoluble crystals with complex structures built around a DNA molecule (see illustration), all GMO Bt toxins are soluble proteins (with no DNA).

4. GMO Bt toxins often have added to them synthetic or unrelated protein molecules.

5. Some are mutated to replace specific amino acids.

6. And far from least, all GMO Bt proteins studied by us were additionally altered inside plant cells. It seems that the GMO crop plant itself invariably creates changes in Bt toxins.

Thus, not a single one of the 23 Bt commercial lines that we analyzed was identical to natural or historically used versions of Bt toxins. All had at least two of the above categories of alterations, but most had many more. To call GMO Bt proteins natural, as biotech companies standardly do, is therefore misleading and scientifically wrong. 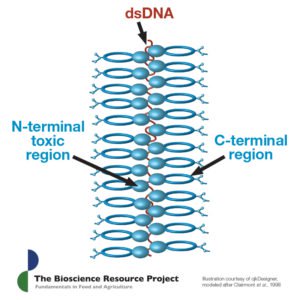 The biological meaning of these alterations is not discussed in the commercial applications that we studied. However, we found it can be inferred, at least in part, from a theoretical understanding of the toxicity of natural Bt proteins.

It is first necessary to note that the natural Bt molecules produced by B. thuringiensis are non-toxic crystals. The actual toxicologically active protein is a much smaller soluble fragment. To get from one to the other the crystal must first be eaten, then dissolved, then processed by the gut enzymes of a target organism, all in a precise sequence. The exact physiological and enzymatic conditions required for each step are particular to each toxin and quite rare in nature. This requirement for exacting conditions is, in large part, where the toxicological specificity of natural Bt toxins originates.

Once processed in this way, the much smaller but now activated toxin molecule attaches to receptors in the gut and makes holes in its membranes. This causes the victim to be digested from the inside by the contents its own gut, which includes B. thuringiensis.

This complex mechanism of toxicity can be conceptualized as the sequential removal of a series of inhibitory structures that act like the safety catch on a gun or the sheath on a sword. Processing prevents premature or inappropriate toxicological activity such as the making of holes in the bacteria’s own membranes.

The key inference from this understanding is that GMO developers, by solubilizing or shortening Bt toxins, have removed some or all of the inhibitory structures that make natural versions safe for most organisms.

Thus, the standard theory of Bt toxin activation implies that, by creating Bt toxins that are more similar to the toxicologically active form, GMO developers are doing two things. First, they are making each Bt protein more active towards known target species. More worryingly, they are making them potentially hazardous towards an entirely new, though largely unknown, range of organisms. So, while the public explanation for using GMO Bt pesticides is that their toxicity is limited to a few species, this rationale is being undercut by placing them into GMO crops.

Theory only goes so far, however. There is another way to ascertain the effects of the changes made to commercial Bt toxins. That is to measure them. As we show, there are indeed published papers reporting that GMO Bt toxins are more toxic than natural Bt toxins. For example, co-author Angelika Hilbeck has shown that a Bt toxin called Cry1Ab is unexpectedly toxic to neuropteran insects. Researchers in the United States separately showed that the GMO corn MON810 unexpectedly affected caddisflies, whereas non-GMO corn did not. Other researchers have shown that fewer than 14 pollen grains can kill swallowtail butterflies. These and other results strongly suggest that GMO Bt toxins can behave very differently than natural ones.

A third way to determine the effects of changes made to Bt proteins is to find a patent in which the developer describes in detail the alterations they have made to a commercial Bt toxin, and the increase in potency that resulted from these alterations.

In U.S. Patent No. 6,060,594 Monsanto describes how they made mutations in a natural Bt toxin called Cry3b that made this natural toxin into, in their own words, a ​“super toxin.” One such super toxin was subsequently introduced to make the commercial GMO corn MON863. Another was used to make GMO corn MON88017. The Bt toxin in MON863 was, according to the patent, 7.9-fold more active than the natural version. These enhanced toxins, claimed the patent, ​“have the combined advantages of increased insecticidal activity and concomitant broad spectrum activity.”

This finding compellingly supports our contention that altered GMO toxins are more potent in their toxicity and effective against a broader range of species. But Monsanto curiously omitted this information when it applied for a regulatory exemption from Environmental Protection Agency (EPA) for the toxin in MON863. Instead, Monsanto argued that that the Bt protein in MON863 was toxicologically equivalent to the natural Bt protein precursor.

This is a resurfacing of the historic contradiction that has marked biotechnology since its inception. Claiming to be identical to old methods when safety is the issue and novel when the question is patents. It would surely be interesting to sit down EPA and the Patent Office together at the same table.

But that is still not all. As mentioned briefly above, all Bt toxins are further altered by the plants into which they have been introduced. This creates unique toxin molecules that differ even further from natural ones. The biological explanations for these alterations are not clear, they may be specific to individual transgene insertion events, or the cause may be biochemical processing of the Bt toxin inside plant cells. But whatever that explanation, these alterations also may enhance the toxicity of the Bt molecule or alter its range of affected organisms.

To understand this point better it is important to appreciate that all commercialized GMOs represent unique genetic events. Each event has been specifically selected for pesticidal effectiveness in the greenhouse of the developer from among thousands of other, presumably less effective, breeding lines. This selection step creates the probability that a commercial GMO will have unique and unexpected toxicological properties that are responsible for that effectiveness.

Our analysis is of importance for many reasons. First are the real-world ecological implications. According to our estimations, a series of independent alterations are creating enhancements in Bt protein toxicity. If each individual enhancement gives rise to a many-fold increase in toxicity, which according to industry data it often does, then the cumulative effect is likely to be very large.

(This is particularly so when the vast quantities of Bt toxins present in each GMO crop field are considered. Not only are Bt proteins present in every cell of each GMO plant, but stacked GMO crop varieties increasingly have many different Bt transgenes. It is easy to imagine that GMO Bt crops may be having large effects on agricultural ecosystems.)

Second, there is a lesson here surely for new generations of biotechnologies. What our paper shows is that government regulators across the globe have opted to assume that Bt toxins, no matter how much they have been altered, whether accidentally or on purpose, have a toxicological profile that is unchanged.

Such an interpretation is highly convenient for applicants wanting to roll out potent novel toxins, but it is useless for protecting public health and the environment. Such disregard of the scientific evidence, laid out in full by us for the first ever time, is part of an unfortunate wider pattern—which we have been documenting—of adoption by GMO regulators of industry-friendly theoretical frameworks and interpretations.

It is the question for our times: How to integrate science into decision-making but ensure it is applied rigorously and impartially and therefore in the public interest?

“Have Monsanto and the Biotech Industry Turned Natural Bt Pesticides into GMO ​‘Super toxins’?” was first published on inde​pen​dentscience​news​.org and is reposted on Rural America In These Times with permission.

Jonathan R. Latham, PhD, is co-founder and executive director of the Bioscience Resource Project, which is the publisher of Independent Science News (inde​pen​dentscience​news​.org). He has published scientific papers in disciplines as diverse as plant ecology, virology, genetics, and RNA biology.
Have thoughts or reactions to this or any other piece that you'd like to share? Send us a note with the Letter to the Editor form.
More articles by Jonathan R. Latham
Rural America
This is Why Gene Editing of Plants and Animals Needs to be Regulated
Rural America
4 Ways the Biotech Industry is Taking Over GMO Regulation from the Inside
Rural America
Michael Pollan and Co. Called the GMO Labeling Debate “Parochial”—Not Everyone Agrees
Similar articles
Rural America
After Platinum Health Took Control of Noble Sites, All Hospital Workers Were Fired
A private-equity startup acquired two rural Missouri hospitals during the pandemic. In March, it suspended all hospital services.
Sarah Jane Tribble
Rural America
How Farmers Markets and Food Trucks Became a Beachhead for Gentrification
In gentrifying neighborhoods, developers use food options to lure in more affluent residents, and longtime residents find themselves forced to compete against the “urban food machine.”
Pascale Joassart-Marcelli
Rural America
Boycotting the Boycotters: In Oil-Friendly States, New Bills Aim to Block Divestment from Fossil Fuels
You may divest from fossil fuels — but you may not be able to do business with the state of Texas.
Erika Bolstad
Join our newsletter
Fearless journalism, emailed straight to you.
Subscribe and Save 59%