The GMO labeling issue has quieted down some but there is still plenty to discuss. On January 19, the USDA proposed its latest definition of genetically modified food, for labeling purposes, and it includes loopholes for gene editing. However, it’s not uncommon for reasonable people to imagine that GMO labeling is a sideshow to the real business of the food movement. After all, most GMO foods and GMO crops are visually indistinguishable from non-GMOs, and tiny non-GMO labels can look pretty irrelevant on the side of a soda bottle containing whole cupfuls of sugar.

Granted, they wrote ​“important but parochial,” but qualifying the significance of GMO labeling in any way was a mistake.

The first issue is that GMOs are legally distinct from non-GMO crop varieties. They possess an enhanced legal status that has enabled GMOs to become a gushing profit center for agribusiness. These rights not only allow their owners to steer farmers’ herbicide use, which also increases profits, but also allows them to legally prevent independent research that would otherwise contradict their advertising claims. The share price of Monsanto reached $142 in 2008, reflecting the enormous profitability of massively increasing seed prices on the back of GMO introductions.

Those profits have in turn fuelled a set of key agribusiness activities. One was the acquisition of nearly the entire independent global seed business, which now resides in very few hands. The second was a cluster of enhanced PR and lobbying activities that were necessary to defend GMOs. Rather than hide in the shadows, agribusiness corporations needed to come out swinging in defense of the indefensible. This necessitated, among other things, a much higher degree of control over teaching content and research at public universities. Thus, GMOs special legal status has enabled an unprecedented ability to control both the present and the future of agriculture.

GMOs are also conflated with science and therefore progress. They have the intellectual role of presenting agribusiness as the innovative and dynamic frontier of agriculture, in contrast to those people who base their efforts on ecological diversity, local expertise, or deep knowledge. This cutting edge image is key to the agribusiness business model of reaping tax breaks and subsidies. 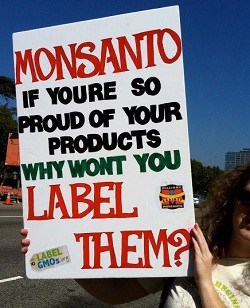 A woman holds a sign in support of California Prop 37 — the 2012 ballot measure that called for the mandatory labeling of genetically engineered food. (Photo: Pin​trest​.com)

All around the world, taxpayer money supports and subsidizes agribusiness, which is existentially dependent on these benefits. In the final analysis, however, the GMOs-as-progress argument is circular: Agribusiness is innovative because it uses GMOs and GMOs show how innovative they are. It’s smoke and mirrors, but politicians fall for it every day, delivering massive transfers of wealth every year from the public to the private sector.

The biological truth of GMOs in the field is equally disturbing. The virtual disappearance of Monarch butterflies has received much attention and there are three leading explanations regarding the cause. The loss of their larval host plants, milkweeds, to farmland is one possibility; poisoning of their caterpillar larvae after consuming insecticide-filled pollen from Bt insect-resistant GMOs is a second; and toxicity from the neonicotinoid pesticides used to treat GMO seeds is the third. The first two both stem directly or indirectly from GMO use in agricultural fields. Milkweeds grow in and around crops. Before GMOs, they could not be eradicated and now they can.) Most likely, however, all three of these causes are a factor and GMO agriculture is likely decimating many other species too. 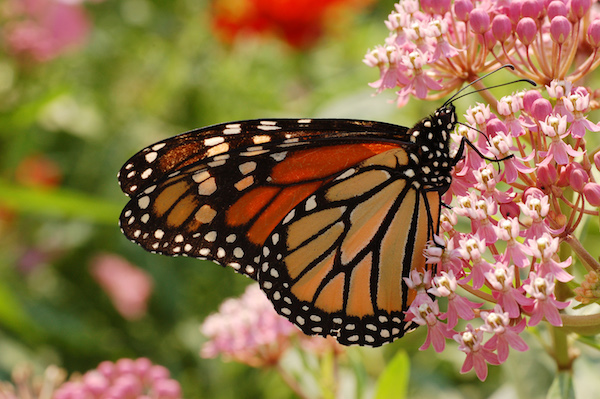 The monarch butterfly (Danaus plexippus) is a milkweed butterfly in the family Nymphalidae. (Photo: Wikimedia Commons)

Monarchs are lovely, but they are not otherwise special. Their significance is as sentinels. Planting milkweeds and pollinator way stations to specifically preserve a sentinel species does not rescue an agricultural ecosystem, but it will mask the symptoms. Agribusiness is right now hoping that no one will notice the difference, and that by bringing back monarchs it can obscure the facts of their killing fields. Internationally, GMOs threaten to transform agriculture in countries like India where millions of people who make a living by laboring in fields are at risk of getting displaced by herbicide-tolerant crops, such as mustard.

At the human consumption end of the food chain, if you live in the United States, no one is protecting you from potential GMO health hazards. Makers of GMO crop varieties don’t even have to notify the FDA of a new product. And if the maker deems the product is not a pesticide, they don’t have to notify the EPA either. Donald Trump won’t make it worse because it can’t be worse. This is non-partisan contempt for public health.

What are the potential health hazards? One important example is the famous (or infamous) rat study of NK603 corn by the French research group under professor Gilles-Eric Séralini. To date, it is the only long-term study of the effects of GMOs on a mammal. If you ignore the tumors that most people focused on, the study also found major kidney and liver dysfunction in the treated animals. This dysfunction was evident from biochemical measurements and visually apparent under the microscope. The results, however, are of no interest to U.S. regulators, even in principle, because they fall between jurisdictions. Nonetheless, from this we can conclude that GMOs — the leading edge of industrial agriculture’s business model — are often directly and indirectly harmful.

The question is not of GMO safety, however, but whether or not they should be labeled. Imagine that organic food was not allowed to be labeled. Would there be such an organized and powerful challenge to industrial food? What labeling does for the agriculture and food system is to allow the public to express its dismay and disagreement with the direction of corporate agriculture and assert their democratic rights to protect themselves. Labeling allows the public to engage with specific policies and products within the vast complexity of the food system and, in real time, push back in a focused way against corruption and dishonesty. There aren’t too many chances to do that in America today.

(“There’s Nothing Parochial About the Issue of GMO Food Labeling” was originally published on Inde​pen​dentScience​News​.org and is reposted on Rural America In These Times with permission from the author. To view the USDA’s most recent GMO proposal, click here. To read the full article by Michael Pollan, Olivier de Schutter, Mark Bittman and Ricardo Salvador’s that prompted this reply, click here. The passage in question reads:

Excerpt from ​“Food and More: Expanding the Movement for the Trump Era”—published Jan. 16, 2017 on CivilEats​.com.)

Jonathan R. Latham, PhD, is co-founder and executive director of the Bioscience Resource Project, which is the publisher of Independent Science News (inde​pen​dentscience​news​.org). He has published scientific papers in disciplines as diverse as plant ecology, virology, genetics, and RNA biology.
Have thoughts or reactions to this or any other piece that you'd like to share? Send us a note with the Letter to the Editor form.
More articles by Jonathan R. Latham
Rural America
This is Why Gene Editing of Plants and Animals Needs to be Regulated
Rural America
Is the Biotech Industry Transforming a Natural Pesticide into a Super Toxin?
Rural America
4 Ways the Biotech Industry is Taking Over GMO Regulation from the Inside
Similar articles
ViewpointRural America
Beware the Corporate Appropriation of “Sustainable” Farming Practices
Long-standing methods of agroecology can feed people, restore ecosystems and transform our food system—but not if agribusiness hollows them out.
Philip A. Loring
Rural America
Tribal Court Case Against Line 3 Pipeline Is First to Invoke “Rights of Nature”
The suit by the White Earth Band of Ojibwe says Enbridge's pipeline would violate the rights of wild rice, which the tribe enshrined in law in 2018.
Alex Brown
Rural America
Growing Food in Self-Defense
For years, Black folks in this small South Carolina town have tended gardens and raised animals to build personal resilience and protect their culture.
Gillian Richards-Greaves
Join our newsletter
Fearless journalism, emailed straight to you.
Subscribe and Save 59%