Healing Minnesota Stories (HMS), an initiative of the Saint Paul Interfaith Network, works ​“to promote understanding and healing between Native American and non-Native people” in the state through the sharing of stories.
The HMS website puts it this way:

Our starting point is an understanding that Native people have suffered deep trauma over many years, losing their land, language and culture, and all who call Minnesota home are the lesser for it. While many people and institutions contributed to that trauma, it happened with the full participation of Christian churches. We all still need healing, healing is doable, and churches have a role to play. We are calling ourselves Healing Minnesota Stories because we believe in the healing power of stories. Stories heal because they make invisible pain visible.

The following HMS post, edited for clarity, explains how the St. Paul public school district’s Multicultural Resource Center is adopting a program in which all fifth grade students will go on a day-long field trip to six sacred Dakota sites in the Twin Cities area.

St. Paul public schools leading the way in Indian education for all

The state of Montana has a remarkable provision in its Constitution called ​“Indian Education for All”. Passed in 1999, Article X reads in part:

It would be great if Minnesota had such a Constitutional provision, but in the meantime a round of applause to the St. Paul Public Schools’ Multicultural Resource Center (MRC) for its efforts to teach all children in St. Paul about our state’s Native peoples, particularly the Dakota.

The state standards for fifth grade social studies include a requirement to teach students about indigenous nations before European contact. Sherry Kempf, outreach coordinator for the MRC, says social studies textbooks do that through teaching about the Aztecs and the Mayans. ​“It overlooks the fact that we had an indigenous nation right here before European contact,” she says. (Full disclosure: Kempf is the sister-in-law of In These Times Editor and Publisher Joel Bleifuss.).

Kempf and others have worked to change the curriculum, focusing on our local history. It started in 2011 when Kempf’s supervisor asked her to design a field trip based on the Bdote Memory Map, which identifies significant and sacred places to the Dakota people near the confluence of the Mississippi and Minnesota Rivers. (The map was created by Mona Smith in cooperation with the Minnesota Humanities Center. The term ​“Bdote” means confluence in Dakota.) 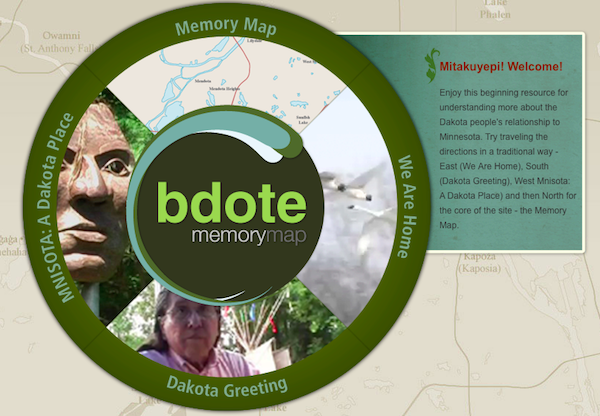 For the first couple of years, Kempf advertised the field trip in a newsletter and teachers would sign up on a volunteer basis. The district had about eight field trips in two years.

Then the project started getting more formal. Kempf worked with Rebecca Biel, the district’s social studies coordinator. They created a plan to take fifth-grade teachers on the day-long field trip so they in turn could lead a field trip for their students. Ramona Stately and Ethan Neerdaels (both Dakota) lead the field trips to teach the teachers. The district’s Office of Indian Education helped develop classroom curriculum to support the project.

St. Paul has 40 elementary schools. The goal was to work with eight schools a year over five years. They are now on year four. The goal is to have every fifth grade student participate in this day-long trip about Dakota sacred sites. There are now specific lesson plans for teachers to use in advance of the field trips.

(“St. Paul Public Schools Leading the Way in Indian Education for All” is reposted on Rural America In These Times with permission from Healing Minnesota Stories.)

Scott Russell is a volunteer and the main writer for Healing Minnesota Stories — a blog created to promote understanding and healing between Native American and non-Native people, particularly those in various faith communities. He can be reached at scottrussell@​usfamily.​net
Have thoughts or reactions to this or any other piece that you'd like to share? Send us a note with the Letter to the Editor form.
More articles by Scott Russell
Rural America
In Minnesota, St. Paul Public Schools Make Indigenous History Part of the Curriculum (Part II)
Similar articles
Rural America
6 Reasons Local Food Systems Will Replace Our Industrial Model
John Ikerd
Rural America
“Baskets” Portrays Rural, Working Class America Differently and That’s a Good Thing
Robyn Bahr
Rural America
Organics Watchdog to Federal Panel: Hydroponically Grown Food Fails to Meet Organic Standards
The Cornucopia Institute
Join our newsletter
Fearless journalism, emailed straight to you.
Subscribe and Save 66%