A Pipeline Is Leaking Natural Gas into Alaska’s Cook Inlet ... and Has Been for 3 Months

For more than three months, an underwater pipeline has been spewing hundreds of thousands of cubic feet of processed natural gas per day in Alaska’s Cook Inlet, possibly threatening critically endangered beluga whales, fish and other wildlife.

The 8‑inch pipeline, owned and operated by Hilcorp Alaska, is leaking more than 210,000 cubic feet of gas per day. The gas is 99 percent methane and provides fuel for four platforms in Cook Inlet.

A notice from the U.S. Pipeline and Hazardous Materials Safety Administration (PHMSA) revealed that Hilcorp knew about the leak as early as December but did not report the leak until Feb. 7, after a helicopter spotted gas bubbling to the surface of the water.

PHMSA says the natural gas discharge could pose a risk to public safety, the environment and marine mammals and has given Hilcorp until May 1 to permanently repair the line or shut it down. But conservation groups warn that waiting until May could allow the release of another 16 million cubic feet of gas. Seven groups have submitted a letter to the Trump administration urging for an immediate shutdown of the 52-year-old pipeline.

“This dangerous leak could stop immediately if regulators did their job and shut down this rickety old pipeline,” wrote Miyoko Sakashita, the Center for Biological Diversity oceans program director. ​“We’re disgusted with the Trump administration’s lack of concern about this ongoing disaster. Every day the leak continues, this pipeline spews more pollution into Cook Inlet and threatens endangered belugas and other wildlife.” The letter was signed by the Center for Biological Diversity, Friends of the Earth, Natural Resources Defense Council, Defenders of Wildlife, Resisting Environmental Destruction on Indigenous Lands, Greenpeace and the Eyak Preservation Council.

Hilcorp contends that Cook Inlet’s heavy ice cover and strong tides has made it too risky for divers to immediately fix the problem and is waiting until at least late March or April for the ice to clear. The ice cover has also made it impossible to survey the leak’s risks to environmental and wildlife. But scientists have already warned that the impact could be disastrous. ​“There are three potential impacts that we worry about,” says Chris Sabine, a chemical oceanographer with the National Oceanic and Atmospheric Administration (NOAA), to InsideClimate News.

First, methane exposure could be harmful to fish, potentially disturbing its main functional systems — respiration, nervous system, blood formation, enzyme activity and others. Secondly, Sabine explained that bacteria metabolizing the methane-saturated water could produce additional carbon dioxide and deplete oxygen levels in the water, creating a hypoxic zone. Lastly, this extra CO2 can cause the water to become more acidic, which can cause shells of some animals to weaken.

Sadie Wright, a NOAA marine mammals specialist, adds that the hypoxic zone could impact the food supply for Cook Inlet’s estimated 340 belugas. The noise coming from the leak could also be a ​“potential stressor,” says Wright, as excessive noise can cause belugas to abandon their habitat. ​“We don’t have any idea how loud the leak might be,” she says.

Not much is known about what is happening under Cook Inlet’s icy waters. State regulators only issued a preliminary approval of Hilcorp’s sampling and environmental monitoring plan last Tuesday (March 14). So far, aerial surveys of the leaking gas field has not uncovered any injured birds or marine mammals, including beluga whales, state officials reported. 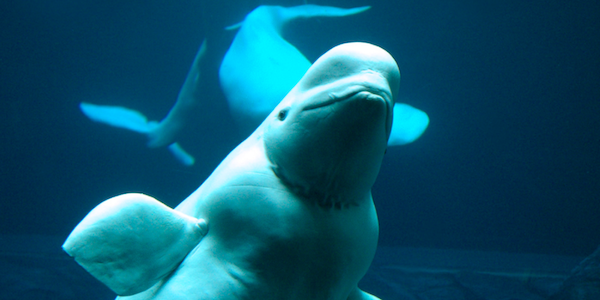 According to the World Wildlife Fund (WWF) the beluga’s extinction risk is currently classified as ​”near threatened.” The primary threats facing the beluga today are changes in ice cover, oil and gas delevopment and other ocean noise. (Photo: Flickr / Ecowatch)

To slow the leak, the company lowered pressure in the affected line on March 4, estimating the leak was reduced from 310,000 to 210,000 cubic feet of gas daily. It again lowered the pressure on Monday and estimated the line is leaking 193,000 to 215,000 cubic feet daily.

As for why Hilcorp hasn’t just shut down its line, the company says an oil spill could occur because the line was once used to carry oil. Shutting down the pipeline would risk it ​“taking in water, freezing and potentially rupturing,” Lori Nelson, external affairs manager at Hilcorp Alaska, explained last month to Alaska Dispatch News. Nelson also said that the line needs to be kept pressurized or else it could fill with water, allowing residual crude oil to escape from what was previously used as a crude oil pipeline.

The Center for Biological Diversity has sent a notice of intent to sue Hilcorp under the Clean Water Act and the Clean Air Act. Homer, Alaska nonprofit Cook Inletkeeper has sent a similar notice to sue.

“If Hilcorp cannot or will not stop polluting our public resources, then it should have no right to operate in our waters in the first place,” writes Bob Shavelson, Cook Inletkeeper executive director in a blog post. ​“Hilcorp has put forth various excuses why it cannot shut down the leaking pipeline in Cook Inlet’s icy conditions — including that water would infiltrate the gas line and other reasons — but the fact remains Hilcorp simply wants to maintain production and profits without interruption.”

Lorraine is a freelance writer for EcoWatch. Her journalism career began in New York City, where she received a M.A. from NYU’s Arthur L. Carter Journalism Institute, and where she worked at several entertainment and lifestyle publications, including the New York Post’s Page Six.
Have thoughts or reactions to this or any other piece that you'd like to share? Send us a note with the Letter to the Editor form.
More articles by Lorraine Chow
Rural America
Monsanto Expands Louisiana Herbicide Facility, Some Locals Say “Toxic Company” Isn’t Worth the Jobs
Rural America
Herbicide Drift: Missouri Peach Farmer Sues Monsanto for Crop Damages
Rural America
Toxic Algae Blooms are Occurring More Frequently and Lasting Longer
Similar articles
Rural America
In the Southeast, Climate Change Finds a Landscape Already Ravaged by Inequality
Meet the groups demanding climate justice that fits the region's unique needs.
Paul Gordon
LaborRural America
Meatpacking Workers Say Attendance Policies Force Them to Work With Covid-19 Symptoms
As the pandemic rages, punitive attendance policies at corporate meat plants coerce sick workers into showing up, according to activists, experts and the workers themselves.
Heather Schlitz
Rural America
For Decades the U.S. Punished Indigenous Healers. Now the Indian Health Service Wants to Hire Them
Sydney Akridge
Join our newsletter
Fearless journalism, emailed straight to you.
Subscribe and Save 66%