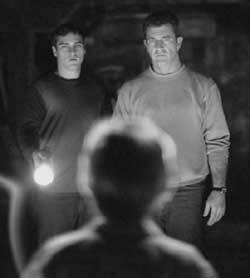 If Thorton Wilder staged an intimate version of Independence Day, it would look like this.

Share Tweet Copy Link Email Print
Published in
September 2, 2002
Signs is about Earth’s infestation by claw-fingered aliens, but its scenes of a rural Pennsylvanian household stunned in front of their television set as the outside world unravels go far deeper. Here is the homeland, far from secure, and a family transfixed by urgent bulletins and city skylines. Signs is a tense experience; even the opening credits lunge at your throat with orchestral shrieks. It may one day reveal itself as a minor classic, a new Invasion of the Body Snatchers for the manufactured scare of its day. Both films accrue suggestiveness in local miniature; if Thornton Wilder ever staged an intimate version of Independence Day, it would probably look a lot like this.

If we’re going to have alien invasion movies, I’ll take such close encounters over gung-ho fighter pilots saving the planet. The idea works a lot better than you’d think: Graham Hess (Mel Gibson) is the story’s lapsed man-in-black, a former minister whose faith has crumbled as a result of his wife’s accidental death. As if that weren’t enough, life in the rustic farmhouse hasn’t turned out quite as expected, with mysterious crop circles scaring the bejeesus out of his two youngsters, and the family dog suddenly gone vicious. (Gibson tenses into the non-heroic role with notable modesty; he even appears slightly shorter.) Rounding out the unhappy family is Merrill (Joaquin Phoenix), Graham’s brother and a once-promising minor leaguer currently pursuing not much of anything. He’s moved in to help out with the kids, though one might at first take Phoenix for a disheveled third son, crashed in an adjacent bedroom.

This first section circles cagily around the unthinkable, pitting our skepticism against humor and distraction. The tension is a familiar one: M. Night Shyamalan doesn’t have a last name that lends itself euphoniously to an adjective, but if it did, this is what we would mean by it. At root, his films are patient vindications of crazy faiths, of ghosts and comic book heroes. Loneliness is his theme, and when blessed with courageous performers, as in The Sixth Sense, he can take us just about anywhere. The fractured family of Signs requires some convincing of the things slithering nightly in their cornfields; in those moments of vulnerability and doubt, they, like Shyamalan, have us in their grip.

So it comes as something of a letdown when out of the bag jumps the cat: slinky, olive-skinned ETs in all their undeniable funkiness. Bug-eyed and scowling, they pretty much fit the bill for Central Galaxy Casting. One gets trapped in a pantry, another is captured on video crashing a little boy’s birthday party; the news anchor warns viewers they may find the footage “disturbing.” It certainly is that, but you can feel the movie coarsening its tactics as the family barricades itself in the basement: The lights go out, doors start thumping, one of the kids has an asthma attack, etc. Naturally, it’s all tastefully done (cinematographer Tak Fujimoto’s shadow palette is the star here), but there’s no avoiding a certain deflation when the otherworldly threat turns out to be so, well, zombie-ish.

Why do they hate us? Then as now, it makes no difference. But Shyamalan rebounds with his stupefying last reel, all but guaranteeing Signs its rightful place as an uncanny document of record. There’s no purpose in spoiling the string of coincidences and symbols that carry us home, but it’s impossible not to gawk at a salvation so baldly faith-based—mysticism versus mayhem in the era of Bush II. You stumble out of the theater into post-invasion America, the white flash of Graham’s restored collar fresh in memory, and wonder how godless you are. Signs, like the best genre work, is utterly of the moment; for all its terrorized genuflecting, it’s sure to grow in fascination as that moment inevitably recedes.
Joshua Rothkopf has been cov­er­ing cin­e­ma for In These Times since 1999. His work has appeared in The Vil­lage Voice, The Chica­go Read­er, Isth­mus and City Pages, among oth­er publications.
Have thoughts or reactions to this or any other piece that you'd like to share? Send us a note with the Letter to the Editor form.
More articles by Joshua Rothkopf
Culture
Undiscovered Country
Culture
9/11 at the Movies
Culture
Smash and Grab
Similar articles
Culture
The Short Case for Making College Free and a Universal Right
After years of cuts, it's time to make the pursuit of knowledge a right for all.
In These Times Editors
Culture
Serial Misogyn-Neigh: The New “BoJack” Explores How We Let Famous Men, And Horses, Off the Hook
Season five of BoJack Horseman turns a critical eye on its characters and itself.
Sady Doyle
Culture
The Abyss of Motherhood
A tightrope walk without a safety net.
Sady Doyle
Subscribe to our free newsletter
Fearless journalism that speaks truth to power
Limited Time: