Joan Walsh to Young Bernie Sanders Supporters: Get Off My Lawn

Walsh’s anger sounds like a diatribe against a rude, “barely shaving,” teen for not properly respecting his elder.

One of the most interesting things about the Sanders/​Clinton race is the age divide. Young people really like Sanders. Old people really like Clinton. Sanders has especially been a hit with young women who favor him by even larger margins than young men do.

Normally, the egalitarian impulse is to cheer for the scrappy rude moneyless teen over the wealthy political scion, but in the world of Clinton adoration, this gets flipped on its head. He shouldn’t be so rude to Clinton precisely because she’s his superior. It’s an anti-egalitarian impulse urging deference by the weaker to the stronger.

This age divide has also materialized in the pundit class. Clinton’s biggest boosters are older folks, while her biggest critics are younger folks. Of course, the old pundits who like Clinton aren’t particularly happy with this divide. Nobody wants to be the old out of touch person screaming for the youths to get off their lawns. But that’s what it has come to.

Consider yesterday’s piece from The Nation​’s Joan Walsh, best known for her endorsement of cutting cash assistance to poor women with children, in peak get-off-my-lawn form:

It came when a young white man — entitled, pleased with himself, barely shaving yet — broke the news to Clinton that his generation is with Bernie Sanders. ​“I just don’t see the same enthusiasm from younger people for you. In fact, I’ve heard from quite a few people my age that they think you’re dishonest. But I’d like to hear from you on why you feel the enthusiasm isn’t there.”

I’m not sure I can unpack all the condescension in that question. I heard a disturbing echo of the infamous 2008 New Hampshire debate moment when a moderator asked Clinton: ​“What can you say to the voters of New Hampshire on this stage tonight, who see a resume and like it, but are hesitating on the likability issue?” Yes, the ​“likability” issue. I found myself thinking: Not again. Why the hell does she have to put up with this again?

My problem wasn’t merely with the insulting personal tone of the question. It was also the way the young man anointed himself the voice of his generation, and declared it the Sanders generation. Now, I know Bernie is leading among millennials by a lot right now in the polls. Nonetheless, millions of millennials, including millions of young women, are supporting Hillary Clinton.

Walsh tries to give this generational divide a gender gloss, as all the older pundits have done (recall Amanda Marcotte’s failed attempt to say Sanders had more young male support than young female support even though the very data she relied upon showed no such thing). But you’d have to be blind not to see an old person mad at a rude, ​“barely shaving,” teen for not properly respecting his elder.

As a factual matter, everything the rude teen said was correct. Young people are not enthusiastic about Clinton. They love Sanders, especially young women. And his friends are right that Clinton is very dishonest. Even Joan Walsh would probably admit that Clinton’s attacks on Bernie’s single-payer plan a couple of weeks ago were deeply dishonest.

What she’s mad about, then, is not the facts in the question but that this damn rude teen spoke to Clinton as if he was her equal and as if he was vetting her for a job as his representative. She said as much in her elaboration on the point on Twitter: 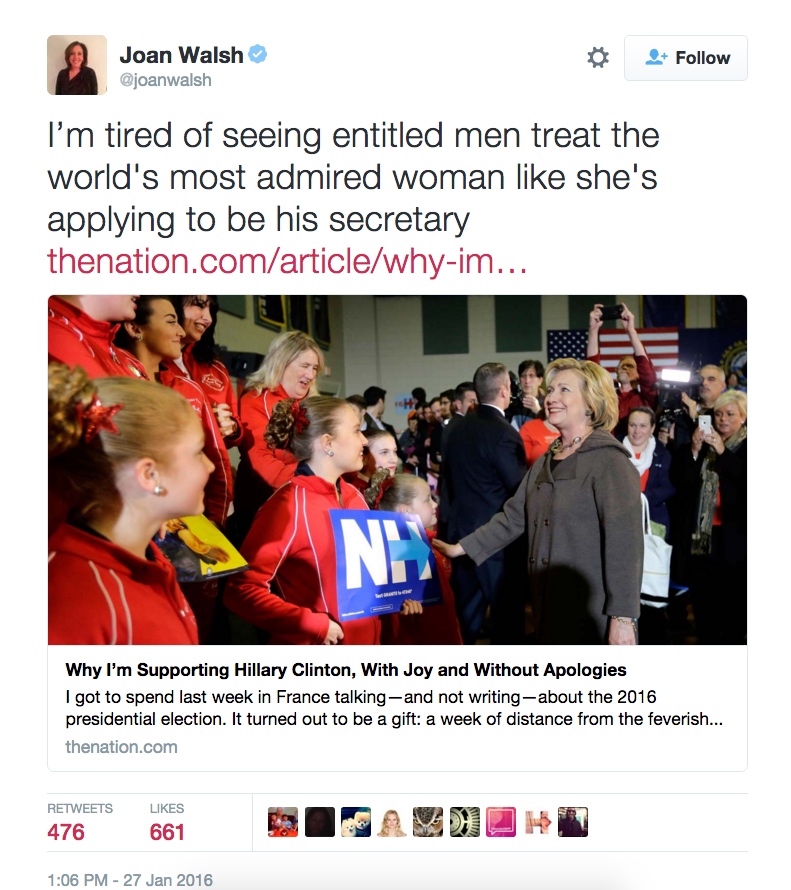 The ​“most admired woman” line is, of course, meaningless. Walsh is relying upon a Gallup poll that asks this question every year and gets rather unenlightening responses. The most admired man is basically whoever the U.S. president is, and the most admired woman is typically a present or former First Lady, with a few notable exceptions like Margaret Thatcher and Mother Teresa:

But putting aside the throwaway ​“most admired woman” line, this has got to be the most ​“get off my lawn” tweet I have ever seen in my life. How dare this young person come into here and speak this way to the queen herself. Has he no respeto? Does he think he can speak such sass to Hillary Clinton, his better?

What’s so interesting about this particular brand of complaint is that it implicitly relies upon the claim that Clinton is the strongest person in the interaction. Her and Bill have $100 million and she’s been at the levers of state power for decades. This is a rude teen with far less power, fame, and money. Normally, the egalitarian impulse is to cheer for the scrappy rude moneyless teen over the wealthy political scion, but in the world of Clinton adoration, this gets flipped on its head. He shouldn’t be so rude to Clinton precisely because she’s his superior. It’s an anti-egalitarian impulse urging deference by the weaker to the stronger.

For as long as the age demographic divide persists, I expect this kind of get-off-my-lawnism to intensify. ​“Shut up them rude kids,” old pundits who are simply reflecting the candidate preferences of their age demographic will say. It will always come obscured in other hand-waving because the last thing you want to do is come off so lame. But it’ll be there. And it’ll be fun to watch.

Matt Bruenig is the founder of the People’s Policy Project, a socialist-leaning think tank in Washington D.C. He blogs at Mat​tBru​enig​.com and tweets at @mattbruenig.
Have thoughts or reactions to this or any other piece that you'd like to share? Send us a note with the Letter to the Editor form.
More articles by Matt Bruenig
Viewpoint
Do We Need a Universal Basic Income? A Debate.
Getting free money from the government is popular. But would it prop up capitalism?
Similar articles
Viewpoint
The Pentagon Is Still Lying About the Deadly U.S. Drone Program
A wrongly targeted Afghan aid worker and his family are among the latest casualties.
Leonard C. Goodman
ViewpointM4BL Issue
The Future of the Movement for Black Lives
Urban rebellions blossomed into mass mobilization upon George Floyd's death. Now what?
M Adams
Viewpoint
Biden's First 100 Days Have Been a Tale of Two Presidencies
When it comes to economic issues, the Biden administration has shown some surprising progressivism. On foreign policy, not so much.
Max B. Sawicky
Join our newsletter
Fearless journalism, emailed straight to you.
Subscribe and Save 66%