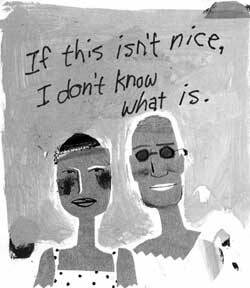 Share Tweet Copy Link Email Print
Published in
November 17, 2003
Author’s note: I’m working on a novel, If God Were Alive Today, about a fictitious man, Gil Berman, 36 years my junior, who cracks jokes or whatever in front of college audiences from time to time, something I myself have done. Here are excerpts from some of what I myself said onstage at the University of Wisconsin in Madison on the evening of September 22, 2003, as we touch off the last chunks and drops and whiffs of fossil fuels.


It must be kind of spooky to be a student or teacher in a university as great as this one, with its libraries and laboratories and lecture halls, while knowing it is within the borders of a nation where wisdom, reason, knowledge and truth no longer apply.

I realize that some of you may have come in hopes of hearing tips on how to become a professional writer. I say to you, “If you really want to hurt your parents, and you don’t have the nerve to be a homosexual, the least you can do is go into the arts. But do not use semicolons. They are transvestite hermaphrodites, standing for absolutely nothing. All they do is show you’ve been to college.”

And hey, listen: A sappy woman sent me a letter a few years back. She knew I was sappy, too, which is to say a lifelong northern Democrat in the Franklin Delano Roosevelt mode, a friend of the working stiffs. She was about to have a baby, not mine, and wished to know if it was a bad thing to bring such a sweet and innocent creature into a world as bad as this one is. I replied that what made being alive almost worthwhile for me, besides music, was all the saints I met, who could be anywhere. By saints I meant people who behaved decently in a strikingly indecent society. Perhaps some of you are or will become saints for her child to meet.

And now I want to tell you about my late Uncle Alex. He was my father’s kid brother, a childless graduate of Harvard who was an honest life insurance salesman in Indianapolis. He was well-read and wise. And his principal complaint about other human beings was that they so seldom noticed it when they were happy. So when we were drinking lemonade under an apple tree in the summer, say, and talking lazily about this and that, almost buzzing like honeybees, Uncle Alex would suddenly interrupt the agreeable blather to exclaim, “If this isn’t nice, I don’t know what is.”

So I do the same now, and so do my kids and grandkids. And I urge you to please notice when you are happy, and exclaim or murmur or think at some point, “If this isn’t nice, I don’t know what is.”

That’s one favor I’ve asked of you.

Now I’ve got another one, a show of hands. How many of you have had a teacher at any point in your entire education who made you happier to be alive, prouder to be alive than you had previously believed possible? Now please say the name of that teacher out loud to someone sitting or standing near you.

I’ll be 81 on November 11. What’s it like to be this old? I can’t parallel park worth a damn anymore. Please don’t watch when I try to do it. But no matter how bad things may get for me, the music will still be wonderful. My epitaph, should I ever need one, God forbid: “The only proof he ever needed of the existence of God was music.”

You and the police are entitled to know, since I am going to spend the night near you, that I am both a Humanist and a Luddite. I may hold a Black Mass in the parking garage of the Best Western Hotel, if I can find a neo-conservative baby to sacrifice.

Do you know what a Humanist is? I am honorary president of the American Humanist Association, having succeeded the late, great science fiction writer Isaac Asimov in that functionless capacity. We Humanists try to behave well without any expectation of rewards or punishments in an afterlife. We serve as best we can the only abstraction with which we have any real familiarity, which is our community.

We had a memorial services for Isaac a few years back, and at one point I said, “Isaac is up in Heaven now.” It was the funniest thing I could have said to a group of Humanists. I rolled them in the aisles. It was several minutes before order could be restored. And if I should ever die, God forbid, I hope you will say, “Kurt is up in Heaven now.” That’s my favorite joke.

Do you know what a Luddite is? That’s a person who doesn’t like newfangled contraptions. Contraptions like nuclear submarines armed with Poseidon missiles that have H-bombs in their warheads, and like computers that cheat you out of becoming. Bill Gates says, “Wait till you can see what your computer can become.” But it’s you who should be doing the becoming. What you can become is the miracle you were born to work—not the damn fool computer.

I consider anybody a Twerp who hasn’t read Democracy in America by Alexis de Tocqueville. There can never be a better book than that one on the strengths and vulnerabilities inherent in our form of government.

Want a taste of that great book? He says, and he said it 168 years ago, that in no country other than ours has love of money taken stronger hold on the affections of men. OK?

And many of you, if not most, have surely at least dipped into that great book. But I can hardly call you Twerps, or even Snarfs, if you have never even heard of the next book I want to celebrate. Practically nobody has, since it is basically a medical text: The Mask of Sanity, first published in 1941 and written by the late Dr. Hervey Cleckley, a clinical professor of psychiatry at the Medical College of Georgia.

Some people are born deaf, some are born blind or whatever, and this book is about congenitally defective human beings of a sort who are making this whole country and many other parts of the planet go completely haywire nowadays. These are people born without consciences. They know full well the pain their actions may cause others to feel but do not care. They cannot care. They came into this world with a screw loose, and now they’re taking charge of everything. They appear to be great leaders because they are so decisive. Do this! Do that! What makes them so decisive is that they do not care and cannot care what happens next.

But seriously, if you read the supermarket tabloids you know that for the past 10 years a team of Martian anthropologists has been studying our country, the only country worth a damn on the whole planet—forget Brazil and Argentina. Well, they went back home last week because they knew how really awful global warming is about to be. Their space ship wasn’t a flying saucer. It was more of a flying soup tureen. And they’re little, only six inches high, but they aren’t green. They’re mauve.

By way of farewell, their little mauve leader said there were two things about American culture no Martian could ever understand. “What is it,” she said in that teeny-weeny, tanny-wanny, toney-woney little voice of hers, “what can it possibly be about blow jobs and golf?”

That is stuff from a novel I’ve been working on for the past five years, about a standup comedian at the end of the world. It is about making jokes while we are killing all the fish in the ocean, and touching off the last chunks or drops or whiffs of fossil fuel. But it will not let itself be finished.

Its working title—or actually non-working title—is If God Were Alive Today. And hey, listen: It is time we thanked God that we are in a country where even the poor people are overweight. But the Bush diet could change that.

And about the novel I can never finish, If God Were Alive Today: The hero, the standup comedian on Doomsday, not only denounces our addiction to fossil fuels, with the pushers in the White House. Because of overpopulation, he is also against sexual intercourse. His name is Gil Berman, and he says to audiences like this one, “I am a flaming neuter. I am as celibate as at least 50 percent of the heterosexual Roman Catholic clergy. Celibacy is not a root canal, and it is so cheap and convenient. Talk about safe sex! You don’t have to do or say anything afterwards, because there is no afterwards.”

Gil Berman goes on: “When my tantrum, which is what I call my TV set, waves boobs in my face, and tells me that everybody but me is going to get laid tonight, and this is a national emergency, so I’ve got to rush out and buy pills or a car or a folding gymnasium I can hide under my bed, I laugh like a hyena. I know and you know there are millions upon millions of good Americans, present company not excepted, who aren’t going to get laid tonight.

“And we neuter vote! And I look forward to a day when the President of the United States, no less, who probably isn’t going to get laid that night either, decrees a National Neuter Pride Day. And out of our closets we’ll come. And we will go marching up main streets all over this great land of ours, shoulders squared, chins held high, and laughing like hyenas.”

What about God, if He were alive today? Gil Berman says, “God would have to be an Athiest, because the excrement has hit the air-conditioning big time, big time.”
Kurt Von­negut, the leg­endary author, WWII vet­er­an, human­ist, artist and smok­er, was an In These Times senior edi­tor until his death in April 2007. His clas­sic works include Slaugh­ter­house-Five, Break­fast of Cham­pi­ons and Cat’s Cra­dle, among many oth­ers. The last book by him pub­lished before his death, A Man With­out a Coun­try (2005), col­lects many of the arti­cles he wrote for this magazine.
Have thoughts or reactions to this or any other piece that you'd like to share? Send us a note with the Letter to the Editor form.
More articles by Kurt Vonnegut
Feature
Ode To America’s Freshwater People
On Abraham Lincoln, Carl Sandburg, Mrs. O'Leary's cow, and other Midwesterners.
Feature
Your Guess Is as Good as Mine
Dispatch
Susan Sontag and Arthur Miller
Similar articles
Feature
Robert Redford Doesn’t Know Which Way the Wind’s Blowing
Redford's 'political' film about '60s radicals, The Company You Keep, is anything but.
Michael Atkinson
Feature
‘Illegal’ Is a Racial Slur
Why the AP's decision to drop 'illegal immigrant' is a victory against bigotry.
David Sirota
Feature
Ode on a Grecian Radical
Will Greece choose austerity, or Alexis Tsipras?
Bhaskar Sunkara
Subscribe to our free newsletter
Fearless journalism that speaks truth to power
Limited Time: