Don’t Give Fascism an Inch

To defeat white supremacy, we must confront it directly. 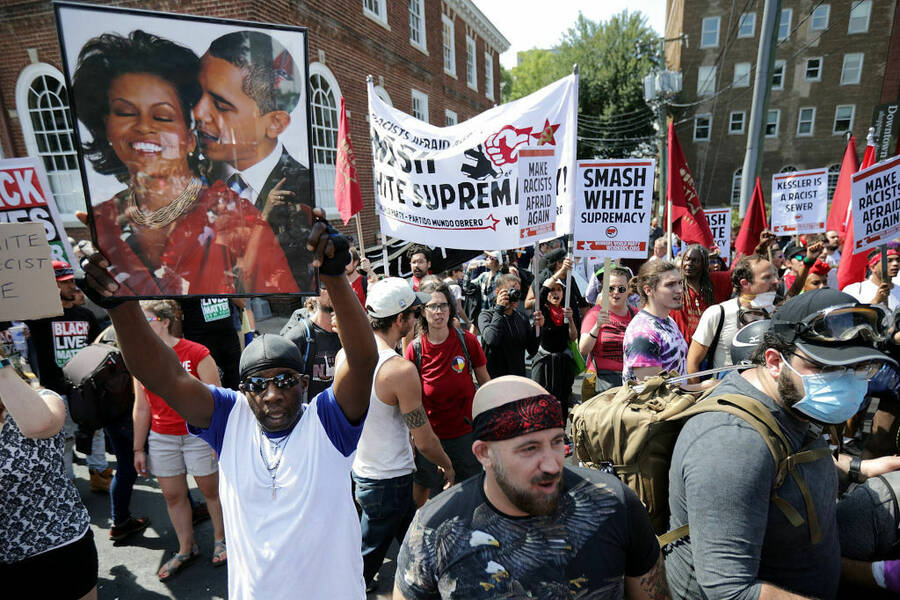 This piece is part of a debate pack­age writ­ten for In These Times’ Sep­tem­ber issue. The print ver­sion went to press before the recent white-suprema­cist vio­lence in Char­lottesville, Va., but here the text has been slight­ly revised to account for these events.

The new far Right will not speak itself into oblivion and irrelevance any more than the internal contradictions of capitalism will collapse the system without attendant struggle.

I agree with Mukund insofar as he stresses the necessity of mass protest against the emboldened hate speech of today’s far Right, as was evidenced with ferocity in Charlottesville. I share his belief that Berkeley students were right to shut down Yiannopoulos. But my reasoning is very different, and leads to much stronger conclusions. Framing this issue in terms of free speech is a fallacy that cedes too much power to the state and other top-down institutions.

While I don’t believe we can or should establish an unbendable set of rules, I submit that a best practice is to deny fascist, racist speech a platform. It should not be recognized as a legitimate strand of public discourse, to be heard, spread and gain traction. And we must recognize that when the far Right speaks, the stage becomes an organizing platform, where followers meet and multiply. For this, we should have no tolerance.

Here’s how the free speech argument typically unfolds. First, both liberals and conservatives defend fascists’ right to freedom of speech. Then, some “no-platformers” point out that the First Amendment only protects against government infringement on speech. But they face a valid counterargument: In an age when social media leviathans control discourse as much as any state power, freedom of speech is not only about government censorship. In calling for “no platform,” we embark on a slippery slope of asking for some authority—be it a public venue, a university or a social media site—to have purview over acceptable speech.

I suggest that a rights discourse is in fact unhelpful here, precisely because it demands an authority as the “giver” or “denier” of the right to speech. We are not asking for a hierarchical structure in which an institution asserts control over permissible speech. We are asserting that space given to racist, fascist, transphobic hate speech will be confronted and besieged.

If we move past a rights discourse, we still face a question of utility. Some see tactical value in allowing the likes of white nationalist Richard Spencer to publicly speak, so they may be thwarted by their own internal contradictions and idiocy. Mukund argues that no-platforming should be applied only when speech bleeds into action, and that otherwise white supremacy can be effectively debated.

That’s wishful thinking, proven false by the actual state of things. Proven false by the Charlottesville Unite the Right rally’s bloody consequences. The alt-right is a fumbling, fractured mess, but support for racist ideology is not dwindling by virtue of this—quite the opposite. Figures like Spencer are the tip of a white supremacist iceberg that has been the norm since long before Trump’s ascendance. The new far Right will not speak itself into oblivion and irrelevance any more than the internal contradictions of capitalism will collapse the system without attendant struggle.

The fact that anarchists and antifascists amass to shut down a far-right rally is not because we see this fractured cadre as outlying fringe elements. Instead, they need stamping out as an extension of our current system, an outgrowth that is particularly blatant and easy to name and confront. We shut down hate-speech events; we wish we could shut down policing, prisons and other sites of racist oppression.

We cannot have one fixed rule for who counts as worth no-platforming; for now, it suffices to name obvious hate-mongers and their cohort. It’s not that complicated. Mukund mentions Charles Murray as the sort of public figure worthy of heckling, but not shutting down. I suggest that we provide no platform, especially in the academy, for his vile attempts to rehabilitate racist, classist theories about heredity and IQ, which have been long discredited. Decades of no-platforming actions against Holocaust denier David Irving have left the anti-Semite unable to schedule public talks around the United States. Murray deserves the same treatment.

Property damage and physical confrontation might court little favor with the liberal-Left. But the deployment of radical tactics is predicated on the belief that power does not yield until it is threatened, and a friendly protest will not do. Such polite protest is too easily dismissed and held at bay, especially with state and institutional infrastructure committed to protecting fascist speech. When protesters shut down attempts by white nationalist organizer Jason Kessler to give a press conference after his Unite the Right rally, police escorted him to safety.

No-platforming is not about taking full control of what speech gets to exist, as if without these speakers speechifying we’d reach some post-fascist utopia. No-platforming is only useful if it is contextualized in a broader abolitionist struggle, which recognizes that white supremacy will not do away with itself by virtue of being “wrong.” Surely by now liberals have realized the folly in assuming justice is delivered by “speaking truth to power”? Power knows the truth, and determines what gets to be the regime of truth. The “truth” of racial justice will not be discovered, proved or argued into lived actuality, but fought for and established.

Natasha Lennard writes about pol­i­tics and pow­er for pub­li­ca­tions such as Esquire, The Nation, The Inter­cept and the New York Times. Her book Vio­lence (with Brad Evans) will be released lat­er this year.
Have thoughts or reactions to this or any other piece that you'd like to share? Send us a note with the Letter to the Editor form.
Similar articles
Viewpoint
The Republican Party's Puzzling Obsession with Socialism
With a pandemic ravaging the country, a historically unpopular president and no platform to run on, the GOP has set its sights on attacking socialism. It doesn’t seem to be working.
Miles Kampf-Lassin
Viewpoint
In Big Cities, It’s Democrats Who Have Poured Money Into Policing
Democratic mayors of Los Angeles, New York and Minneapolis have treated bloated police budgets as sacrosanct.
Sonali Kolhatkar / Independent Media Institute
Viewpoint
Astra Taylor: Bernie Sanders’ Exit Is an Indictment of Our Broken System—Not His Campaign
Voter suppression was stronger than Bernie Sanders' voter turnout plan. And the pandemic has made things worse.
Astra Taylor
Subscribe to our free newsletter
Fearless journalism that speaks truth to power
Limited Time: