PANAMA CITY, PANAMA — You see a lot of parked taxis in the parking lot at the Panama Ports terminal here. But they’re not waiting to give rides to longshore workers — dockworkers themselves are the drivers. Longshore wages in Panama are so low that after a shift driving a crane, a longshoreman has to put in another shift driving a taxi just to survive.

At Panama Ports, however, this situation has begun to change. A few weeks ago the union signed a new contract with raises totaling more than 27% over the next four years. One factor that made this agreement possible was support from a U.S. union, the International Longshore and Warehouse Union (ILWU). That agreement will have a big impact on the lives of longshoremen and their families.

In Panama they call longshore pay ​“hunger wages.” Workers’ families live below the government’s own poverty line, and some families literally go hungry.

“That’s one reason why the company had to constantly hire new workers,” recalls Ramiro Cortez, a leader of the Panamanian union SINTRAPORSPA. ​“Most people who got jobs here were just working while they were actually looking for better jobs somewhere else. Many accidents in the port could have been avoided if the workers weren’t so exhausted. They go in at 7 a.m., and leave at 8 p.m., and then go and drive or do some other job.”

The port does have a high accident rate, and two workers were killed a month apart at the end of last year. In one accident, a crane lifting a container hit a six-high stack of other containers that were being stored on the dock, right next to the ship. As they fell, one hit a 22-year-old man who’d been working less than a month.

Cortez was called by the workers. On arrival he saw the crane operator in shock and weeping. He stopped managers from interrogating him until he got counseling, and then told the company that all the workers in the terminal had been traumatized and should be sent home. If they weren’t, he warned, the union itself would shut down the terminal. In the end, management sent the shift home with pay for the day.

When Cortez announced the agreement to the workers, ​“I could have been elected president of Panama that day,” he says.”It had never happened before.”

The new union contract established five committees, the most important of which is safety. ​“The challenge is now to implement this agreement and ensure the company abides by it,” emphasizes SINTRAPORSPA president Alberto Ochoa. ​“Before, the company did what it pleased, and changed the hours, overtime, days off and wages — whenever it wanted. Now they know we’re not on our own, by ourselves. Companies don’t want real unions because we open the eyes of the workers.”

Panama Ports is a subsidiary of the Hong Kong-based Hutchinson Port Holdings Limited (HPH). Workers at the terminal were trapped in a ​“yellow” or company union there for many years. Ochoa and other independent-minded longshoremen had a long history of trying to change this, and finally organized a new union: SINTRAPORSPA. They collected over 2,000 signatures on a petition for recognition and asked for a government-administered election to certify it as workers’ bargaining representative.

In balloting last year, however, the Ministry of Labor claimed that 1,500 workers had voted against SINTRAPORSPA. Workers on the docks found this unbelievable, since they knew how many votes they had lined up. They also knew, however, that the President of Panama himself, Juan Carlos Varela, is a partner in the law firm used by Panama Ports, one that specializes in helping company management fight unions. The dockworkers challenged the transparency of the election.

“It was obvious that we had the support of the great majority of the workers, including those who belonged to the company union,” recalls Cortez. ​“Nevertheless, when we went to the ministry to protest, they did everything they could to stop us.”

Ochoa and Cortez appealed to the ILWU, whose headquarters is in San Francisco. ILWU International Vice-President Ray Familathe and Greg Mitre, president of the ILWU retirees in Southern California, flew to Panama City and met with the Minister of Labor, Luis Ernesto Carles Rudy. They brought with them a letter signed by six U.S. Congress members, asking for a rerun. The government reluctantly agreed, and in a fair vote SINTRAPORSPA won overwhelmingly.

“The support from the ILWU was very effective,” Cortez says.”The Panamanian authorities were never concerned before about how they conducted themselves with us. Powerful companies, with the money at their disposal, got whatever that money could buy.” 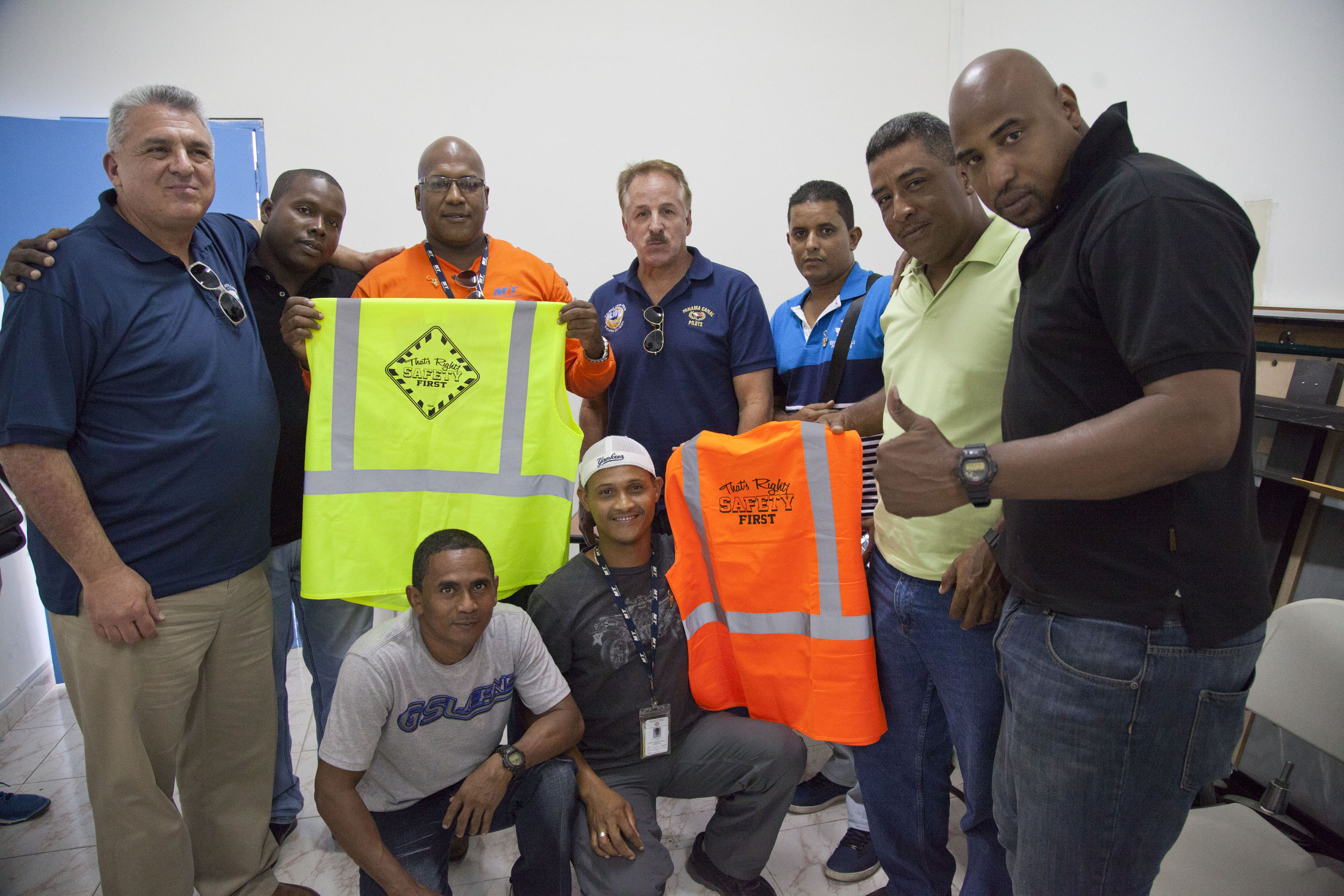 The impact of that support was also felt in the subsequent contract negotiations, which only took a month to arrive at agreement. In one meeting the company executive president even told union negotiators that he was ​“very concerned” at the union’s growing relationship with the ILWU.

These experiences led the Panamanian dock union to become the newest member of the ILWU’s Panama Division. The division was established in 2012, when several hundred members of the Panama Canal Pilots Union decided to join the ILWU. The division has now grown to include 2580 Panama Ports longshore workers. According to Capt. Rainiero Salas, the Panama Canal Pilots’ Union secretary general, ​“The Panama Division is growing as workers see what we can gain by working together. It’s not going to stop here.” Adds Ochoa, ​“Unions in the ports and the Canal should get together so that we can speak with one voice, and get better benefits and respect for all workers.”

Panama division leaders are also meeting with the union for dockers in Colon on the Atlantic side of the isthmus, the Union of Workers at the Manzanillo International Terminal. Like the workers at Panama Ports, the dockers in Colon also rebelled against a former union leadership they viewed as too close to the company. At MIT they elected a new slate of officers a few months ago.

The MIT terminal is operated by SSA Marine, a global company headquartered in Seattle, Washington. According to workers in Colon, container crane operators work 8‑hour days, for six days straight. For that, their pay starts at $854 a month, or about $4.27 per hour. Base pay for an experienced longshore worker in SSA Marine’s home port of Seattle is $35.68 per hour.

The low wages on Panama’s docks have a lot to do with the difficulty workers face in forming militant unions and negotiating contracts. But poverty is also a product of trade and economic policies pushed by U.S. corporations and the government trade negotiators who represent their interests.

The U.S. signed a free trade agreement with Panama in 2009. In 2007 Panama’s National Agrarian Organization, the country’s largest organization of farmers, wrote to the U.S. Congress, asking it to stop the negotiations. In Panama, it said, the agreement ​“was ratified by … a small sector of Panamanian elites.” It predicted a huge displacement of farmers no longer able to compete with U.S. agricultural exports. They would then become either migrants leaving the country, or unemployed people desperate for work in the country’s cities.

In Colon, displaced farmers have become workers in the Free Trade Zone, a stone’s throw from the harbor and MIT terminal. The zone is one of the world’s oldest, set up in 1946 when the Canal Zone was a de facto U.S. colony. Today over 300 mostly-foreign companies run factories that pay no municipal or local taxes, no national taxes on investment, and no duties on products they export. Workers earn $10 – 15 a day — even less than longshoremen.

“In this country,” says Ramiro Cortez, ​“there is no middle class. There is just the upper class and the lower class.” While wages are low, Panama is second only to Hong Kong as a home for multinational firms’ subsidiaries — many created with the sole purpose of evading taxes.

The U.S. gave up the Canal in 1977, in an agreement negotiated between President Jimmy Carter and one of Panama’s most progressive presidents, General Omar Torrijos. Nevertheless, U.S. influence in Panamanian politics is still strong. The U.S. invaded Panama in 1989 to ​“arrest” then-President Manuel Noriega for drug dealing. Hundreds of residents of Panama City’s poorest barrio, El Chorillo, died after it was bombarded by naval vessels. The seafront neighborhood was then assaulted by troops.

The ILWU in Panama does not directly challenge the reverberations of that old colonial relationship. But it does represent the interests of workers by advocating progressive policies on wages, trade and labor rights, while effectively defending workers on the job.

Over the past year pilots have fought, with the division’s support, to ensure that the huge ships that pass through the canal every day are operated safely. The Canal Authority has launched a huge expansion project, building new locks capable of handling giant post-Panamax container ships carrying up to 13,000 containers. The union has criticized the government for not working closely with pilots to design work rules and procedures for safely handling these larger ships in the new locks. It is especially concerned over a new unilateral government directive that, for the first time, seeks to have ships pass each other in the narrow Culebra Cut. Previously, ships traveling in opposite directions have waited, so that only one ship at a time traverses the cut.

The government says the cut has been widened, but pilots says there is no room for error, and the consequences of ships hitting each other would be disastrous. Last October Capt. Salas criticized the government publicly over this issue. ​“It seems very odd that the most experienced people moving ships through this highly important system have been completely ignored by its governing authority,” he charged. ​“Pilots’ most critical mission is ship safety, yet we’ve not been consulted.”

Panamanian port and maritime unions are also concerned at the government’s efforts to decertify the union for the canal’s tugboat captains. The same legal technicalities used against the captains, they fear, could be used to attack the representation rights of other unions. That would undermine dock unions just as they are starting to change the basic living standards of workers.

“Our main objective as a union is to make a difference in the economic status of those who have earned the least — the longshoremen,” Ochoa declares. ​“I’m not saying this new contract will give us a wage that can pay for everything, but it’s a lot better than what we had before​.As a union we will keep struggling to win better conditions, especially economic ones.”

Donate
David Bacon is a writer, photographer and former union organizer. He is the author of The Right to Stay Home: How US Policy Drives Mexican Migration (2013), Illegal People: How Globalization Creates Migration and Criminalizes Immigrants (2008), Communities Without Borders (2006), and The Children of NAFTA: Labor Wars on the US/​Mexico Border (2004). His website is at dba​con​.igc​.org.
Have thoughts or reactions to this or any other piece that you'd like to share? Send us a note with the Letter to the Editor form.
More articles by David Bacon
Labor
Hundreds of Fruit Packing Workers Are On Strike
Labor
Don’t Punish the Dreamers—Punish the Corporations Driving Forced Migration
Labor
40,000 AT&T Workers Begin 3-Day Strike
Similar articles
Labor
Low Wages in Illinois: When Corporations Don’t Pay, the Public Does
Marilyn Katz
Labor
Voices From These Times: ‘Debtor’s Blues’
Keisha Nelson
Labor
Wal-Mart Warehouse Workers File Class Action Wage Theft Lawsuit
Kari Lydersen
Join our newsletter
Fearless journalism, emailed straight to you.
Subscribe and Save 66%