“If you haven’t used the bathroom yet, now is a really good time to go,” shouts Stacy Kono as 50 people board an early morning bus to San Diego on Sunday, July 1st at a West Oakland (California) parking lot. ​“It’s a long drive.”

Kono is the Network Director for Hand in Hand — a national network of employers of nannies, house cleaners and personal attendants that has been mobilizing its members to fight Trump’s policy of family separation. She was one of several organizers of a caravan from the San Francisco Bay Area to the border to participate in the July 2 #FreeOurFuture action called by the imigrant justice group Mijente.

Under his ​“zero-tolerance” policy, Trump has separated nearly 3,000 migrant children from their parents, sparking widespread outrage. Among those joining the protests have been immigrant rights activists, youth, faith leaders and civil rights advocates. By engaging and turning out members, Hand in Hand is now bringing an additional constituency to the fight in impressive numbers: the employers of immigrant workers.

One of those members is Monique Harris. Together with her son Brandon and her personal attendant Jules, Harris braved the 16-hour round trip and blazing San Diego sun to be at the march. As someone with Cerebral Palsy, she has employed domestic workers to support her with her daily needs since she was 15 years old. Wearing her Hand in Hand t-shirt and with a hand-written ​“Families Belong Together” sign affixed to her wheelchair, Harris explained why felt compelled to stand in solidarity with immigrant workers.

“These workers work hard and deserve to be here. My son is with me here today and I can’t imagine someone taking him away from me,” said Harris. ​“Let the children go back to their families.”

“Like many people my age who were disabled in childhood or at birth, I experienced really traumatic separations from my family through institutionalization. At least I got to see my mom for an hour a day and she knew where I was. But six decades later, I am still dealing with the trauma of that separation,” explained Anne Finger, an employer of a domestic worker from Oakland, California. ​“I know it must be much worse when you don’t know where your kid is or when you’ll ever see them again. That’s the biggest thing that brought me here today.” 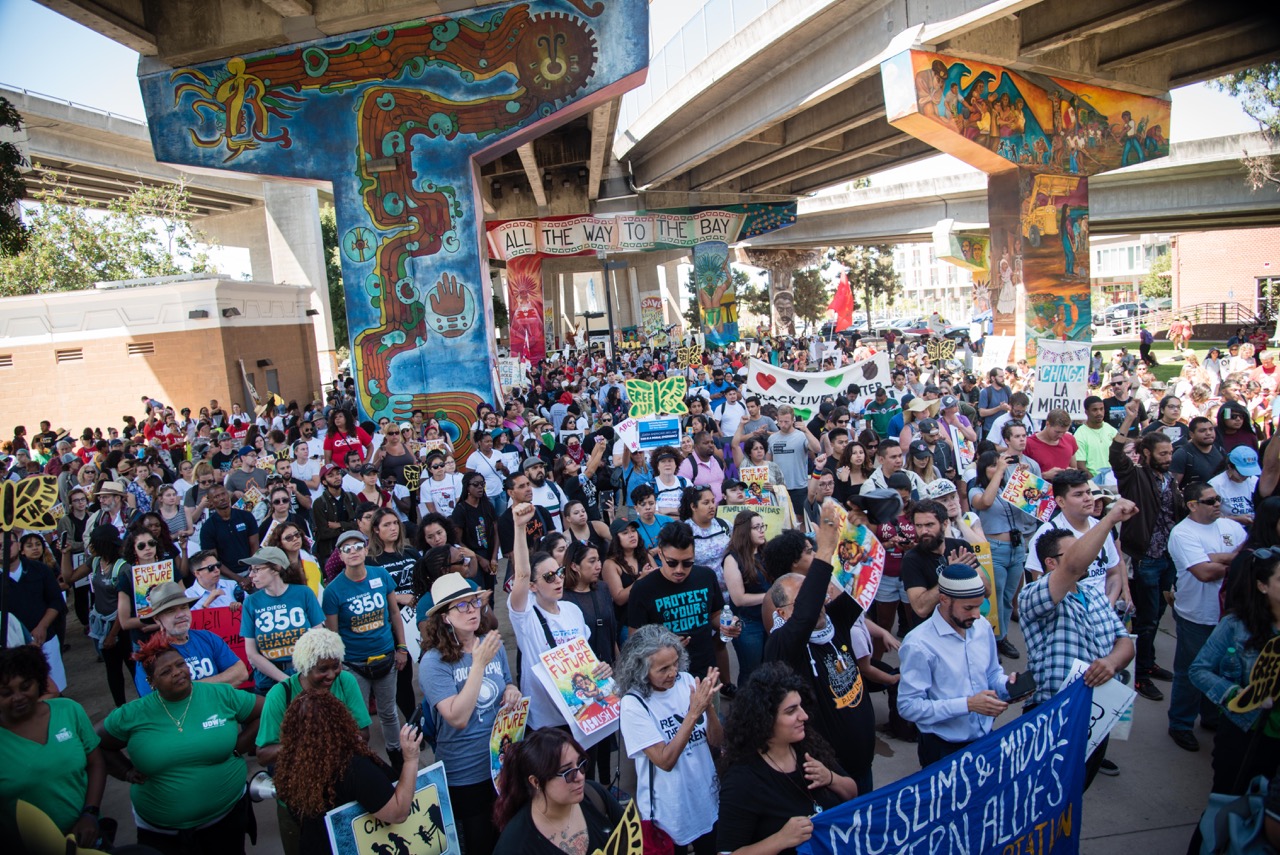 Another Hand in Hand member, Jessica James, travelled all the way from Maplewood, New Jersey to be there.“Being a young mother, we all have help. Domestic work makes all other work possible. You’re only as good as your child care. There’s nothing on earth more soul-crushing than to think that I couldn’t get to my own child,” said James. “‘Illegal’ versus ​‘legal’ are words meant to divide. Immigrants are holding this country together with hard, thankless work that goes unrecognized.”

Hand in Hand’s caravan to the border was neither the beginning nor end of their its action to reunite families – and to end mass criminalization of immigrant communities altogether.

After Trump was elected, Hand in Hand launched a ​“Sanctuary Homes” campaign. Already accustomed to encouraging and equipping employers to talk with their workers about wages and working conditions, Hand in Hand asked members to have one-on-one conversations with their workers about how best to support them in the face of escalating attacks on immigrant communities. Gaining confidence, they then asked members to consider opening their homes to refugees.

As the Sanctuary Homes campaign says, ​“The home can be a powerful center of moral action.” But Hand in Hand has also been taking it to the streets.

Following these successful actions across the country, the network produced a handy toolkit for first time or newer activists to organize their own family-friendly action — with tips on everything from how to locate the nearest ICE office and turn people out to how to get media attention and what to do if and when police arrive.

Based on that template, at a recent ​“Playdate protest” organized by Hand in Hand in Oakland, approximately 100 young children and their parents met up at the local children’s library and marched across the street to the Alameda County Sheriff’s office to demand the official stop collaborating with ICE.

However, activists say those measures are not enough. Rev. Deborah Lee of the Interfaith Movement for Human Integrity, who has led protests outside the Richmond Detention Center for years now, told In These Times, ​“The families are asking for reunification — that their loved ones be returned immediately through the alternatives to detention program, and that there be no transfers to other facilities.”

“My husband Fernando was detained last September on his way to drop off our four-year-old daughter at daycare,” recounted Lourdes Barraza, sharing her story at the Oakland Playdate Protest. ​“She was traumatized and later begged me not to take her to daycare, saying ​‘If daddy hadn’t taken me, he’d be here with us.”

Many are doubtful that the Trump administration will make the rapidly approaching July 26th court-imposed deadline to reunite more than 2,000 children and their families, but to activists working around the clock to free immigrant families, one thing is clear: ​“We need to keep the pressure on,” says Kono. 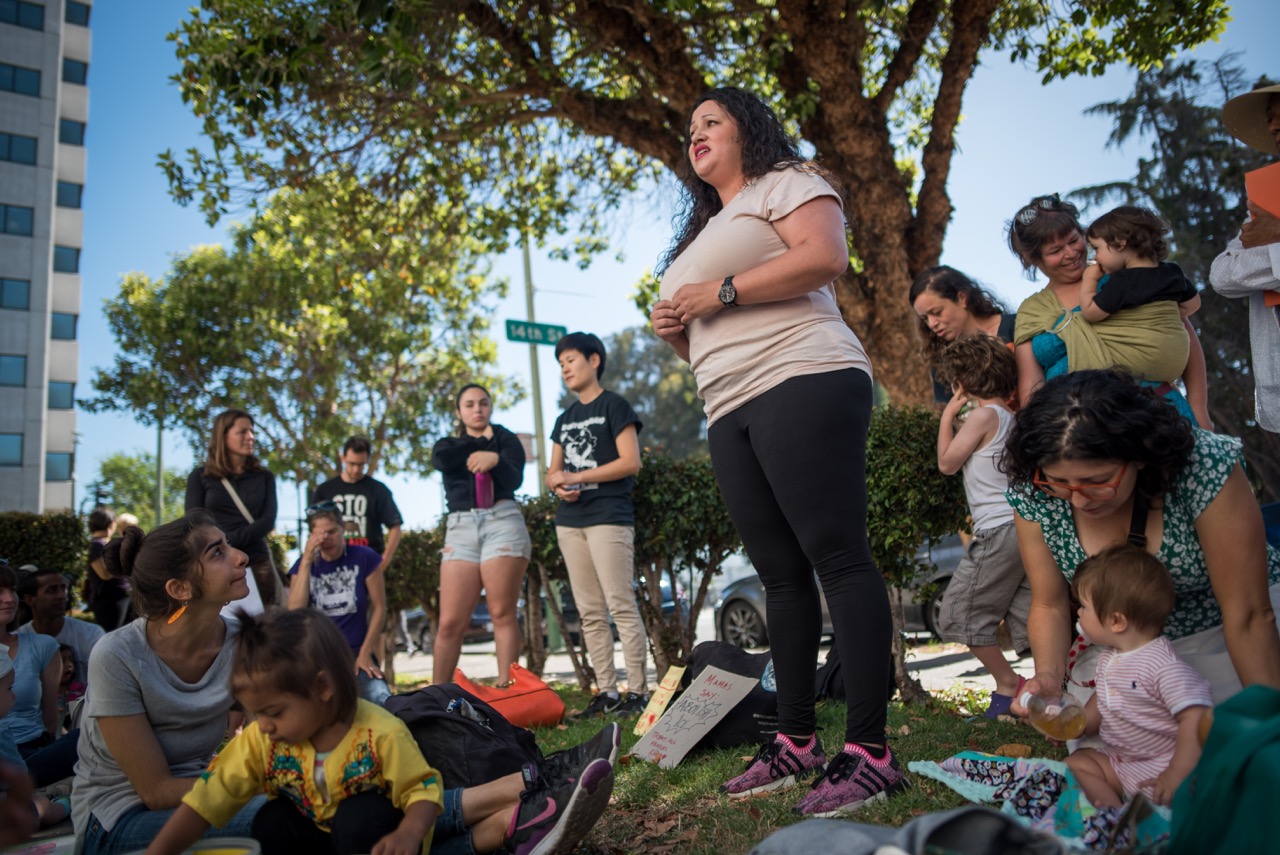 Lourdes Barraza, whose husband Fernando was detained by ICE last year, speaks out at a ​“Playdate Protest” organized by Hand In Hand and other organizations in Oakland, California on July 10.

Have thoughts or reactions to this or any other piece that you'd like to share? Send us a note with the Letter to the Editor form.
More articles by Brooke Anderson
Labor
Indigenous Farmworkers Can Show How to Heal Our Burning Planet
Grape harvesters share traditional ecological knowledge to right our relationship with the land—and each other.
Feature
“Today Is About Defending Democracy”: People Take to the Streets to Stop Trump's Attempted Coup
Oakland protesters say now is an important time to defend the election—and resist Trump’s efforts to undermine the vote.
Dispatch
Union Teachers Are Donating Their Stimulus Checks to the Undocumented
Undocumented workers are excluded from unemployment protections and stimulus checks, but not from union solidarity.
Similar articles
Labor
Emails Show Sen. Corker’s Chief of Staff Coordinated with Network of Anti-UAW Union Busters
Mike Elk
Labor
After Right-Wing Attacks, SEIU Cuts Old ACORN Ties
David Moberg
Labor
Financial Reform Round 1: Obama, Progressives vs. Wall St., Centrist Dems
Art Levine
Join our newsletter
Fearless journalism, emailed straight to you.
Subscribe and Save 59%