Robert Reich: Why Putting Steve Bannon on the National Security Council Is So Terrifying

The dangers of “America First.” 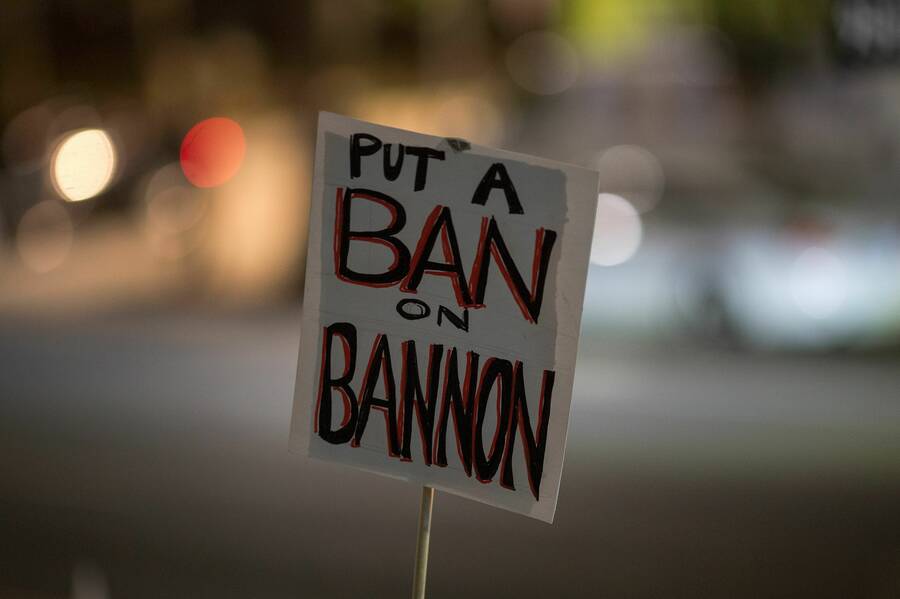 Trump is unhinged and ignorant. Bannon is nuts and malicious. If not supervised by the Joint Chiefs of Staff, their decisions could endanger the world. (DAVID MCNEW/AFP/Getty Images)

But forget facts. Forget analysis. This is the Trump administration.

Donald Trump has reorganized the National Security Council – elevating his chief political strategist Steve Bannon, and demoting the Director of National Intelligence and the Chairman of the Joint Chiefs of Staff.

Meanwhile, the Director of National Intelligence and the Chairman of the Joint Chiefs of Staff will now attend meetings only when “issues pertaining to their responsibilities and expertise are to be discussed,” according to the presidential memorandum issued Saturday.

Political strategists have never before participated in National Security Council principals meetings because the NSC is supposed to give presidents nonpartisan, factual advice.

But forget facts. Forget analysis. This is the Trump administration.

And what does Bannon have to bring to the table?

In case you forgot, before joining Donald Trump’s inner circle Bannon headed Breitbart News, a far-right media outlet that has promoted conspiracy theories and is a platform for the alt-right movement, which espouses white nationalism.

This is truly scary.

Here’s the big worry: Trump is unhinged and ignorant. Bannon is nuts and malicious. If not supervised by the Joint Chiefs of Staff, their decisions could endanger the world.

In Trump’s and Bannon’s view, foreign relations is a zero-sum game. If another nation gains, we lose. As Trump declared at his inaugural: “From this day forward, it’s going to be only America First.”

Some of you are old enough to recall John F. Kennedy’s inaugural, when the young president pledged to support any friend and oppose any foe to assure the success of liberty.

But Trump makes no distinction between friend and foe, and no reference to liberty. As conservative commentator Charles Krauthammer observes, Trump’s view is that all other nations are out to use, exploit and surpass us.

Not incidentally, “America First” was the name of the pro-Nazi group led by Charles Lindbergh that bitterly fought FDR before U.S. entry into World War II to keep America neutral between Churchill’s Britain and Hitler’s Reich.

Trump’s and Bannon’s version of “America First” is no less dangerous. It is alienating America from the rest of the world, destroying our nation’s moral authority abroad, and risking everything we love about our country.

Unsupervised by people who know what they’re doing. Trump and Bannon could also bring the world closer to a nuclear holocaust.

Robert B. Reich, Chancellor’s Pro­fes­sor of Pub­lic Pol­i­cy at the Uni­ver­si­ty of Cal­i­for­nia at Berke­ley, was Sec­re­tary of Labor in the Clin­ton admin­is­tra­tion. Time mag­a­zine named him one of the ten most effec­tive cab­i­net sec­re­taries of the 20th cen­tu­ry. He has writ­ten thir­teen books, includ­ing the best­sellers After­shock and The Work of Nations. His lat­est, Beyond Out­rage, is now out in paper­back. He is also a found­ing edi­tor of the Amer­i­can Prospect and chair­man of Com­mon Cause. His new film, Inequal­i­ty for All, is now avail­able on Net­flix, iTunes, DVD and On Demand.
Have thoughts or reactions to this or any other piece that you'd like to share? Send us a note with the Letter to the Editor form.
More articles by Robert Reich
Viewpoint
Robert Reich: How Mitch McConnell’s Republicans Are Destroying America
While a lethal pandemic and economic crisis wreak havoc on working families, McConnell and the GOP are dead set on protecting business interests and enriching the wealthy.
Labor
Robert Reich: Break Up Facebook (and, While We’re At It, Google, Apple and Amazon)
Feature
Robert Reich: The GOP Tax Bill Is Everything That’s Wrong With Our Democracy
The Republican plan will hurt the poor, enrich the wealthy and make GOP campaign donors very happy.
Similar articles
Feature
Saqib Bhatti Debunks the Inevitability of Austerity in Detroit, Chicago and Around the Country
“The entire narrative has been shaped around the fact that you have to file bankruptcy, that it’s inevitable. ... That lets a whole class of people off the hook—the people who aren’t paying their fair share.”
Lillian Osborne
Feature
Whose Race—And Gender—Is it Anyway?
Caitlyn Jenner and Rachel Dolezal trigger an important conversation.
Marilyn Katz
Feature
Why the U.S. Spent Billions on an Army that Conscripted Child Soldiers
Was that in the "national interest of the United States?"
Nick Turse
Subscribe to our free newsletter
Fearless journalism that speaks truth to power
Limited Time: