Requiem for a Dreamer 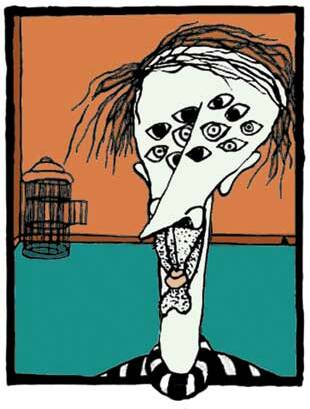 Editor’s note: What fol­lows is a con­ver­sa­tion between Kurt Von­negut and out-of-print sci­ence fic­tion writer Kil­go­re Trout. It was to be their last. Trout com­mit­ted sui­cide by drink­ing Dra­no at mid­night on Octo­ber 15 in Cohoes, New York, after a female psy­chic using tarot cards pre­dict­ed that the envi­ron­men­tal calami­ty George W. Bush would once again be elect­ed pres­i­dent of the most pow­er­ful nation on the plan­et by a five-to-four deci­sion of the Supreme Court, which includ­ed ​“100 per-cent of the black vote.”

TROUT: I’ve nev­er vot­ed in my whole damn life. I didn’t want to be com­plic­it. But is it time I did?

KV: The planet’s immune sys­tem is obvi­ous­ly try­ing to get rid of us, and high time! But sure, go vote for some­body. What the hell.

KV: The over­whelm­ing pop­u­lar­i­ty of Pres­i­dent Bush, in spite of every­thing, final­ly shows us what the Amer­i­can peo­ple, whom we have so sen­ti­men­tal­ized for so long, à la Nor­man Rock­well, real­ly are, thanks to TV and pur­pose­ly lousy pub­lic schools: igno­rant. Count on it!

TROUT: You ever meet any­body who was real­ly smart?

KV: Only one: Saul Stein­berg, the graph­ic artist who’s dead now. Every­body I know is dead now, present com­pa­ny except­ed. I could ask Saul any­thing, and six sec­onds would pass, and then he would give me a per­fect answer. He growled a per­fect answer. He was born in Ruma­nia, and, accord­ing to him, he was born into a house where ​“the geese peeked in the windows.”

KV: I said, ​“Saul, what should I think about Picas­so?” Six sec­onds went by, and then he growled, ​“God put him on Earth to show us what it’s like to be real­ly rich.” I said, ​“Saul, I’m a nov­el­ist, and many of my friends are nov­el­ists, but I can’t help feel­ing that some of them are in a very dif­fer­ent busi­ness from mine, even though I like their books a lot. What would make me feel that way?” Six sec­onds went by, and then he growled, ​“It is very sim­ple: There are two kinds of artists, and one is not supe­ri­or to the oth­er. But one kind responds to the his­to­ry of his or her art so far, and the oth­er responds to life itself.”

I said, ​“Saul, are you gift­ed?” Six sec­onds went by, and then he growled, ​“No. But what we respond to in any work of art is the artist’s strug­gle against his or her limitations.”

TROUT: Sor­ry. You know me: Always run­ning on empty.

KV: Some­body else smart? OK, try this: After the Sec­ond World War I enrolled in the grad­u­ate divi­sion of the Anthro­pol­o­gy Depart­ment of the Uni­ver­si­ty of Chica­go, the most con­ceit­ed uni­ver­si­ty in the coun­try. And in a sem­i­nar for about eight of us, half of us vets on the GI Bill of Rights, my favorite pro­fes­sor, in fact my the­sis advi­sor, put this Socrat­ic ques­tion to us: ​“What is it an artist does?”

TROUT: Hold on: What makes Chica­go so conceited?

KV: That it isn’t Harvard.

TROUT: Got it: That it isn’t high society.

KV: Bin­go. Any­way, I’m sure we all came up with smart-ass answers, since a grad­u­ate sem­i­nar in any sub­ject is a form of improv the­ater. But the only answer I remem­ber is the one he gave: ​“An artist says, ​‘I can’t do any­thing about the chaos in the uni­verse or my coun­try, or even in my own mis­er­able life, but I can at least make this piece of paper or can­vas, or blob of clay or chunk of mar­ble, exact­ly what it should be.’”

KV: Did you for­get to take your Via­gra today?

TROUT: Very fun­ny. But what he said an artist does is what I do every time I brush my teeth or tie my shoes. You thought this guy was smart? He’s an asshole.

KV: Look, when you put a piece of paper in your type­writer, don’t you try to make it exact­ly what it should be?

TROUT: No, I just eff­ing write.

KV: What are you eff­ing writ­ing now?

TROUT: It’s about how the future has as much to do with the present as the past does. Giraffes can only have come from the future. There’s no way evo­lu­tion in the past would have let some­thing that defense­less and imprac­ti­cal live for 15 minutes.

TROUT: Try this: The First World War was caused by the sec­ond one. Oth­er­wise the first one makes no sense, wasn’t about any­thing. And all Picas­so had to do was paint pic­tures that were already hang­ing in muse­ums in the future.

TROUT: Just try­ing to be Ein­stein. You nev­er know. But hey, the two peo­ple you said were so smart were both men. Women say smart things, too. I went walk­ing with a woman the oth­er day, if you can believe it, and I stopped to retie my shoes, and she said, ​“Every time I go for a walk with a man he always has to stop to retie his shoes. Why won’t men tie dou­ble knots? A fear of com­mit­ment?” How’s that for anthro­pol­o­gy, the sci­ence of man? I’ll bet they didn’t teach you about men and shoelaces at Chicago.

TROUT: Glad to have that cleared up.

TROUT: Back to Cohoes for an AA meeting.

KV: But you’re not an alcoholic.

TROUT: It’s the only place I can pick up women. They have their defens­es down. ​“Hel­lo, I’m Kil­go­re Trout and I’m an alco­holic.” And I’ve met this babe named Flamin­go who is a pro­fes­sion­al psy­chic. She’s going to tell me our country’s for­tune. Who’ll win the next election.

Kurt Von­negut, the leg­endary author, WWII vet­er­an, human­ist, artist and smok­er, was an In These Times senior edi­tor until his death in April 2007. His clas­sic works include Slaugh­ter­house-Five, Break­fast of Cham­pi­ons and Cat’s Cra­dle, among many oth­ers. The last book by him pub­lished before his death, A Man With­out a Coun­try (2005), col­lects many of the arti­cles he wrote for this magazine.
Have thoughts or reactions to this or any other piece that you'd like to share? Send us a note with the Letter to the Editor form.
More articles by Kurt Vonnegut
Feature
Ode To America’s Freshwater People
On Abraham Lincoln, Carl Sandburg, Mrs. O'Leary's cow, and other Midwesterners.
Feature
Your Guess Is as Good as Mine
Dispatch
Susan Sontag and Arthur Miller
Similar articles
Culture
The New Deal Funded the Arts. The Green New Deal Should, Too.
Cultural work has a key role to play in shaping the climate-friendly economy.
Ashley Dawson
Culture
News Feed Fatigue: It’s Getting Harder To Think
The case for taking a break from the news.
Jessa Crispin
Culture
For Cowboy Poets, One Topic is Taboo
They love the land. But few at the National Cowboy Poetry Gathering want to talk about how climate change is ravaging the West.
Carson Vaughan
Subscribe to our free newsletter
Fearless journalism that speaks truth to power
Limited Time: