Wisconsin Dairy Farmers Have Been Duped into Producing Too Much Milk

For a farmer, getting the news that you no longer have a market for your product is devastating. I know — I got one of those letters a few months ago. It is especially problematic if you are a dairy farmer, since cows need to be milked every day. So, in April, when 75 Wisconsin farmers were notified by their milk buyer, Grassland Dairy Products, that they would no longer have a market, state government officials took notice.

While our government officials appear to be concerned about the well-being and economic viability of Wisconsin’s dairy farmers, I wonder if they are really more interested in the viability of the ​“dairy industry.”

Are they concerned about fair farm prices and the environment, or keeping the economic engine rolling?

Gov. Scott Walker and the Wisconsin Department of Agriculture, Trade and Consumer Protection have done all they can to encourage Wisconsin farmers to produce more milk — never questioning how much milk might be too much — because their concern lies with a dairy industry that depends on cheap milk.

In 2003, the Wisconsin Legislature passed Act 235, a bill that limited the ability of local communities to oppose large farms.

In 2011, the State Assembly voted to provide dairy farmers tax credits for modernizing or expanding their operations.

In 2012, Walker introduced his ​“30×20” plan to grow Wisconsin’s milk production, to 30 billion pounds annually by 2020, by offering grants to dairy producers to help them grow their businesses and Wisconsin’s dairy industry.

Dairy economist Bob Cropp, professor emeritus at the University of Wisconsin-Madison, thought the initiative was a good idea and that it would not lower milk prices. He apparently agreed with the governor, who noted: ​“The reality is, that the growth is not fast enough for the opportunities that are before us.” But Wisconsin dairy farmers met the 30-billion-pound goal last year. The predictions of no downside to the increased milk production, however, did not work out so well.

Over the past 10 years, the number of Wisconsin dairy farms has fallen from 14,265 to 9,230. Those that remain have gotten larger, much larger. Concentrated animal feeding operations, or CAFOs, are now the preferred model for the future of dairy production in Wisconsin. Their numbers have grown from 50 in 2000 to 252 in 2016. But the support for larger farms and more milk does not end with the governor and Wisconsin Legislature. The Wisconsin Department of Natural Resources (WDNR) seems to be very interested in being a partner to large-scale farms. This isn’t totally wrong, but the partnership must ensure environmental protection standards are followed.

As former DNR Secretary George Meyer noted, ​“The standards aren’t really at stake, those are set in law.” However, complaints of non-enforcement by the DNR are increasing under the Walker administration. Since the governor took office in 2011, he and the Republican-controlled Legislature have co-opted the administrative rule-making process, taking that power, basically, into their own hands. Even the Wisconsin attorney general got into the act with his legal opinion stating that the DNR had no authority to consider the cumulative effects of high-capacity wells on the waters of Wisconsin — a gift to CAFOs but a real problem for the environment and the citizens of Wisconsin. 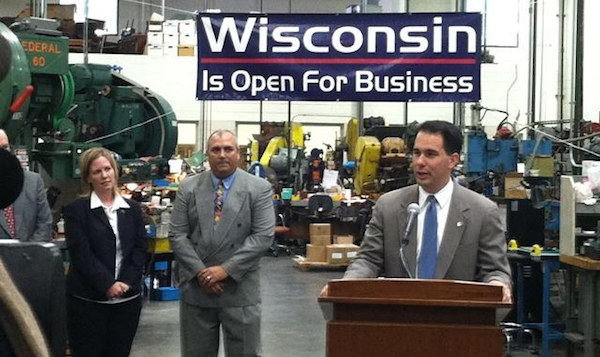 By doing all they can to support the growth of dairy CAFOs — whether by gutting the DNR’s enforcement capabilities through staff and budget cuts, or by appointing a DNR secretary who says she has ​“brought customer-friendly private-sector principles to the agency” — the governor and state Legislature have encouraged large dairies to locate and expand in Wisconsin and produce as much milk as they can.

While far too much emphasis has been placed on increasing milk output in Wisconsin and the rest of the nation, solutions to the consequences are falling short. Governor Walker blames Canada for supporting Canadian dairy farmers over U.S. farmers. Not to be outdone in stupidity, the state Assembly’s answer was sending a letter to University of Wisconsin System President Ray Cross, asking him to direct some research funds into exploring alternative uses (beyond consumption) for milk.

They encourage farmers to overproduce, cry crocodile tears over low prices and lost markets, then, despite the $250 million they cut from the University of Wisconsin budget, they ask for research on alternative uses for milk…

What about just producing less milk?

Supply management would promote fair prices for farmers, a stable supply for consumers and possibly some protection for the environment by limiting the growth of CAFOs. But no — that would make too much sense and might cut into industry profits.

Farmers have been duped into producing too much milk. Their profitability is gone and, as they are suffering, so is the quality of Wisconsin’s environment.

(“Jim Goodman: Wisconsin dairy farmers have been duped” was originally published on host​.madi​son​.com and is reposted on Rural America In These Times with permission from the author.)

Have thoughts or reactions to this or any other piece that you'd like to share? Send us a note with the Letter to the Editor form.
More articles by Jim Goodman
ViewpointRural America
The Food Crisis Didn’t Begin with the War in Ukraine
Even as the failures of industrial agriculture become obvious, U.S. agribusiness aims to force it on the rest of the world.
Rural America
Our Food System Is Broken and Biden’s USDA Pick Won’t Fix It
Tom Vilsack showed his pro-corporate colors when he served as Obama's ag secretary. To build a just food system under his leadership, we will have to push from below.
ViewpointRural AmericaThe Wisconsin Idea
How Decades of Corporate-Friendly Farm Policies Wrecked Rural America
A Wisconsin dairy farmer explains what Democrats need to do to rebuild rural communities and regain the ground they’ve lost.
Similar articles
Rural America
When Conservation Means Fencing Out Black Farmers
In southern Illinois, conservation groups see a chance to protect rare oak savannas. Black farmers and hunters see their way of life being bought out from under them.
Tony Briscoe
Rural AmericaThe Wisconsin Idea
“In for a Fight": Rural Wisconsinites Resist Influx of Industrial Hog Facilities
Despite local efforts to block new Concentrated Animal Feeding Operations (CAFOs), corporate agriculture interests are legislating and intimidating their way out of accountability.
Simon Davis-Cohen
ViewpointRural America
Healthy Food Comes from Healthy Land, Not from Laboratories
Manufactured meat substitutes do nothing to restore the ecosystems and rural communities ravaged by industrial agriculture.
Will Harris
Join our newsletter
Fearless journalism, emailed straight to you.
Subscribe and Save 66%